Dozens of Nations Send Help To Battle Fires in Greece

Greece thanked the countries that have rushed to assist the nation to battle the multiple fires that have been ravaging the country for almost a week.

With a tweet in English, Kyriakos Mitsotakis, the Greek Prime Minister, showed how many countries sent help to Greece, and what kind of assistance they provided.

PM Thanks Countries for Assisting Greece

”On behalf of the Greek people, I would like to express our heartfelt gratitude to all the countries that have sent assistance and resources to help fight the wildfires,” PM Mitsotakis noted. 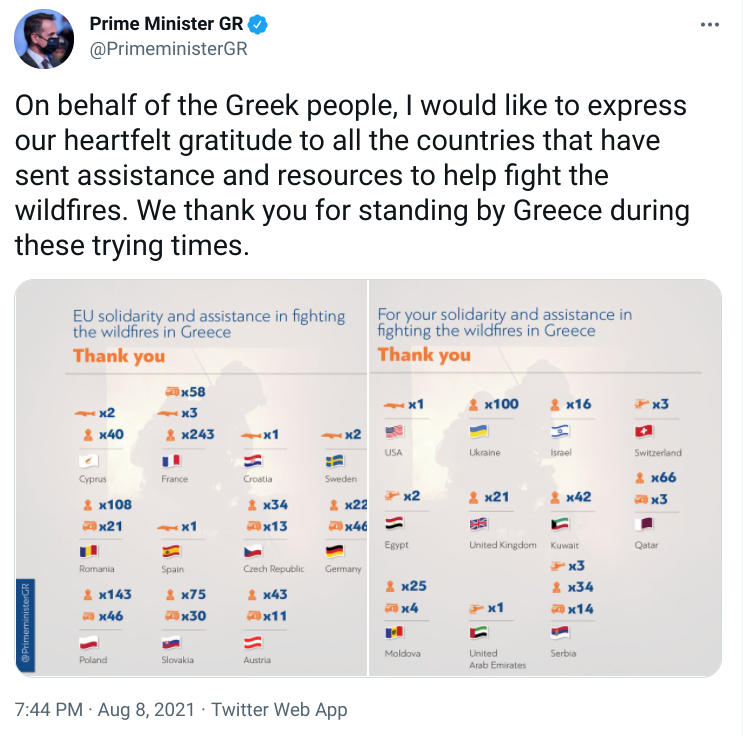 ”We thank you for standing by Greece during these trying times,” he added.

Greece received the largest assistance in its history for a wildfire emergency, with a total of 22 nations, both EU member states and non-EU member states, rushing to help the challenged country.

Firefighters, rescuers, helicopters, aircraft, and equipment were among the types of assistance that countries sent to Greece.

A score of countries outside of the EU also sent help to Greece, showing how serious the situation is at the present.

Russian President Vladimir Putin has decided to increase the number of firefighting forces that have been sent to Greece, according to an announcement made by the Kremlin’s press office.

The country has already sent forces to help fight the catastrophic wildfires the country, which have destroyed over 150,000 acres of land and countless homes in the week that they have been raging in Greece.

“Due to the urgent request from the Greek government, Russian President Putin has given the order to increase the Russian team, who are working to control the fires in critical areas of the Hellenic Republic,” the statement reads.

Senate Foreign Relations Committee Chairman Bob Menendez (D-N.J.) today penned a letter to Secretary of Defense Lloyd Austin to urge the Department of Defense to provide additional assistant to Greece in its efforts to confront the devastating fires currently raging across the country.

“Greece is a close and valued NATO ally. I urge the Administration to take all measures necessary to support the people of Greece in their time of need,” Chairman Menendez said, applauding the Department of Defense’s deployment of P8 aircraft to Greece to provide enhanced situational awareness of the fires’ threats to infrastructure and residential areas.

“These efforts have saved lives and I urge the Department to fulfill additional requests for assistance, including the deployment of CH-47 helicopters.”

Although not Greek himself, Menendez has worked tirelessly to help Greece as it faced repeated incursions on its airspace and territorial waters, and after Turkey purchased its S-400 missile system from Russia against the express wishes of its fellow NATO members.

The fires continue to ravage the island of Evia island in Greece for the sixth day on Sunday morning.

The destruction is immense, with the entirety of the northern part of the island now being almost completely destroyed. Settlements, villages, and towns continue to be evacuated, with people being rushed to Aidipsos, the only town of northern Evia that has been intact.

Unfortunately, the fire front rages from the Gulf of Evia in the West to the Aegean Sea in the East.

More than 200 Ukrainian and Romanian firefighters, who came to the rescue with their own equipment, gave a real battle along with their Greek colleagues.

The foreign firefighters operated in the villages of Troupi, Kalyvia, and Spathari.

Related: Evia Fire: “Our Children Will Never See the Island Like We Did” Says Mayor