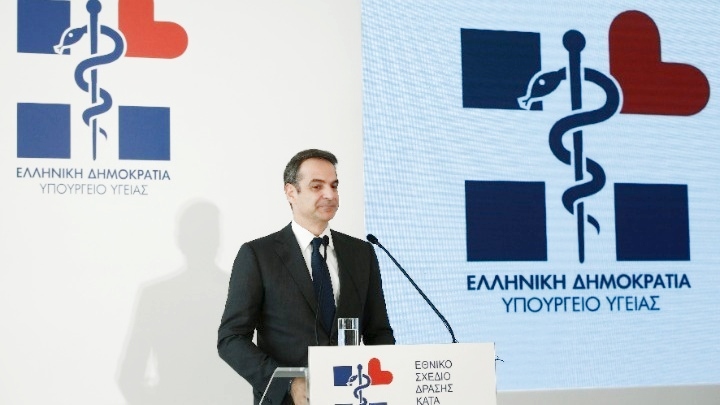 PM Kyriakos Mitsotakis presented a new, National Action Plan against smoking on Tuesday, a cornerstone of one of his main priorities, to completely change Greece’s historically loose approach to smoking in public places.
“The smoking ban is a bold initiative to protect public health. A symbolic move to modernize and refine our daily lives. But it is also an exercise in the mutual respect that ultimately strengthens social cohesion,” the Prime Minister said in an event held at the Ministry of Health in Athens.
Mitsotakis pointed out that other countries have succeeded in banning smoking in public spaces and Greece can do so as well, adding “There is no longer any excuse, of the kind which claims that these things cannot be done in Greece.”
“Eleven acts of legislation, Presidential decrees and ministerial decisions in ten years, with zero results,” Mitsotakis noted sardonically.
”This is the sad account of the indoor smoking ban, supposedly enacted in 2009,” Mitsotakis said, highlighting that “governments did not dare, administrations took no action and society tolerated.”
”As if smoking does not concern our health and culture; as if it is a harmless detail,” the Greek Premier added with frustration.
The government also released a new television advertisement informing the public about the enforcement of the law, showcasing how mutual respect can help change Greece’s mentality on the issue.

The new, tougher penalties announced on Monday for those who ignore the ban are aimed at gradually but steadily altering Greece’s long-lasting tolerance of smoking, a habit which violates the basic, fundamental right of non-smokers and children to be able to breathe clean air.
Greek citizens can now officially report incidents of violations of the ban by a simple telephone call to the number 1142.