The temperature of the Aegean Sea has now risen to 28C (around 82 F) — which is four degrees higher than normal for this time of year — due to the extended heatwave that hit Greece beginning early this week.

The Athens National Observatory, meteo.gr, says that satellite reports indicate that the rise in sea temperatures is also due to unusually mild winds. 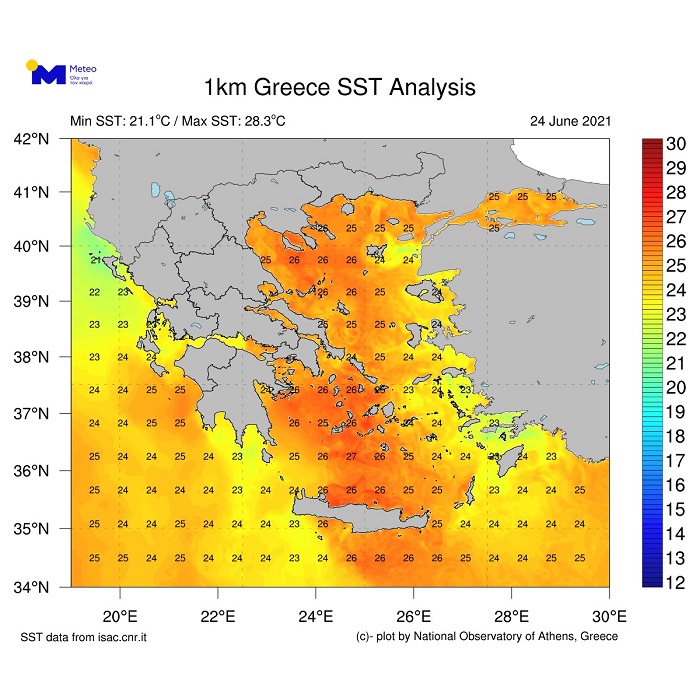 High temperatures will continue to prevail in Greece for a fourth consecutive day on Friday. It is highly probable that temperatures in some parts of the mainland may exceed 42 degrees Celsius (107 degrees Fahrenheit), meteo said.

High temperatures are also expected in the Greek islands, with the mercury soaring as high as 37 to 38C (100.4 degrees F) in the Eastern Aegean and 38 to 39C (102 degrees F) on the Ionian islands.

At the same time, sand and dust concentrations will continue to be high, especially in western Greece and the Peloponnese.

A series of health safety guidelines were issued on Tuesday for vulnerable groups in an emergency bulletin by the National Observatory’s Meteo weather service.

According to a recent study by Meteo, heatwaves — defined as three consecutive days of above 36.5 Celsius (97.7 F) — are becoming more regular in Greece.

A recent study by the World Wide Fund for Nature (WWF) warned that the Mediterranean is turning into a tropical sea due to rising global temperatures.

The Italian branch of the WWF says that due to the climate crisis nearly 1,000 exotic species have adapted to live in its waters — replacing endemic species.

This finding confirms reports by Greek scientists that alien fish species from the Red Sea have “invaded” the Aegean and the Ionian Seas over the last several years.

The study found that with temperatures rising 20 percent faster than the global average and sea levels also rising — they are projected to have risen one meter by 2100 — the Mediterranean is becoming the saltiest and fastest-warming sea on the planet.