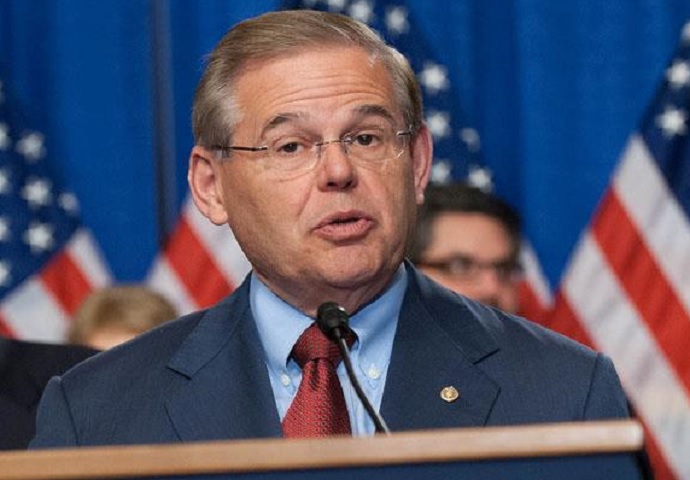 Philhellene Senator Robert Menendez (D-NJ) was named the new chairman of the US Senate’s powerful Foreign Relations Committee after Democrats took control of both houses of Congress in the November elections.

Menendez, a tireless defender of Greece, had chaired the committee once before, during the 113th Congress under President Barack Obama.

Although not Greek himself, Menendez has worked tirelessly to help Greece as it faced repeated incursions on its airspace and territorial waters, and after Turkey purchased its S-400 missile system from Russia against the express wishes of its fellow NATO members.

Letter sent to Pompeo in protest of Turkish incursions

The powerful veteran Senator recently sent a letter to US Secretary of State Mike Pompeo demanding action regarding Turkey’s recent acts of aggression in the Mediterranean.

In the letter, dated June 22, the ranking member of the Foreign Relations Committee, expresses his deep concern about recent actions by Turkey which “mark an escalation in aggression in the eastern Mediterranean in a way that threatens US interests.”

Senator Menendez states that “in recent months President Erdogan has been threatening regional stability by increasing aggression against our Greek and Cypriot partners.”

The letter refers to the Turkish purchase of the Russian S-400 missile system “which calls into question Ankara’s commitment to the (NATO) alliance.”

Turkey has repeatedly violated the sovereignty of countries on its borders and across the Mediterranean, the Senator charges, adding “Since January, Turkey has become the latest country to violate the UN arms embargo on Libya and has leveraged support for Libya’s Government of National Accord to push an ill-conceived maritime border agreement that ignores not only the legitimate claims of Greece and Cyprus, but also basic international law.”

“We must uphold our own laws”

“The European Union has taken welcome steps in sanctioning Turkish individuals involved in violating the Cypriot EEZ. In solidarity with our allies and friends in Europe, the United States should follow suit and immediately impose sanctions on these same individuals.

“Turkey’s repeated violations of Greek and Cypriot sovereignty highlight President Erdogan’s lack of commitment to the rule of law,” Senator Menendez charges, adding that now, “we must uphold our own laws in pursuit of our interests, and stand with our allies in the face of aggression.”

Menendez has said that he wants to rebuild the Committee’s reputation for bipartisanship, with its members placing national security interests above petty party politics.

A majority of committee members want to reassert American leadership globally during this new administration.

Juan Pachon, the communications director for Democrats on the Foreign Relations Committee, said the new chairman will refocus his committee on oversight issues as well as what he termed the fallout from the coronavirus pandemic all over the world.

As Pachon stated to the Congressional publication Roll Call, “Senator Menendez takes the long view to his chairmanship, guided by the belief that projecting American values from the committee dais will make a real difference in the world.

“The issues confronted by the SFRC are not defined by either political party and will require the committee to fully reengage so the United States Congress stands on the side of all people who struggle for democracy, human rights and freedom.”

A much more active committee than in the Trump administration

Back when he was last chairman, during the years 2013-2014, Menendez held 45 more policy hearings than were held during the Trump administration.

Jodi Herman, a former staffer for Menendez, says of the Philhellene “He is a policymaker. He relishes his role. As chairman of that committee, he is interested in legislating. He is interested in conducting oversight and using the tools of the committee to do those things.”

Greek Prime Minister Kyriakos Mitsotakis sent his congratulations to Menendez in a Tweet on Thursday, saying that he loved forward to “pursuing common goals of peace and stability in the Eastern Mediterranean and the wire region.”

Senator Menendez responded by thanking the Greek PM, saying that he looked forward to working with him to “promote peace and prosperity in the region. Here’s to the work ahead.”

Thank you for the warm wishes.

As Chairman of the Senate Foreign Relations Committee, I look forward to working with you to promote peace and prosperity in the region.

Here’s to the work ahead. https://t.co/CfnDljm4QG