Greece has countless ruins to visit and historical sites to explore, all of which are priceless archaeological treasures. However, some discoveries made in the last decade are so spectacular that they have forever changed our understanding of history.
Here’s a look at some of the most important archaeological finds in Greece during the last ten years.


In 2012 Greek archaeologists unearthed a large tomb deep within Kasta Hill, the largest burial mound in Greece, northeast of Amphipolis.
The tomb is dated back to the late 4th century BC, sometime during the period after the death of Alexander the Great in 323 BC.
It is not yet known who is buried in the tomb. Initial public speculation that it could be the tomb of Alexander the Great, due to its size and the estimated cost of construction, was dismissed by experts. All known historical records mention Alexandria, Egypt as the final resting place of Alexander the Great, although he died in Baghdad.
It has been suggested that the occupant of the splendidly-decorated Amphipolis tomb could either be a wealthy Macedonian noble or a member of the Macedonian royal family.
There are two sphinxes just outside the entrance to the tomb. Two of the columns supporting the roof in the first section are in the form of Caryatids, in the style of the 4th century BC.
The excavation revealed a breathtakingly beautiful pebble mosaic showing the abduction of Persephone by Hades. The mosaic is directly behind the Caryatids and in front of the Macedonian-marble door leading to the “third” chamber.
2. Thessaloniki treasures, discovered in 2010 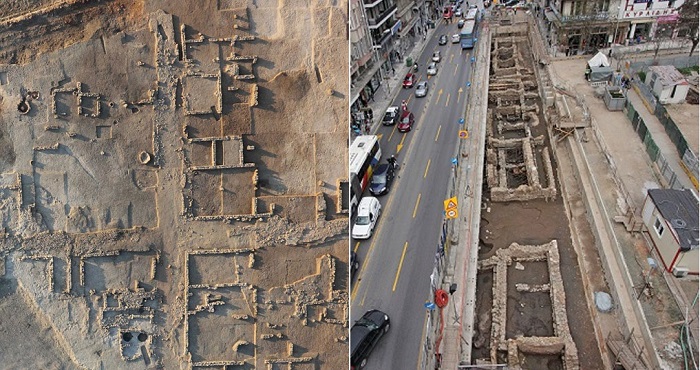 A 15-year subway project in Greece’s northern metropolis has shed light on previously-unknown facets of daily life in the history of the 2,300-year-old city.
The excavation has uncovered Thessaloniki’s central sixth-century highway, as well as a marble plaza, a fountain and a headless statue of Aphrodite.
Thousands of priceless ancient finds such as coins, mosaics and statues have also been uncovered.
Most of the finds are from the Byzantine era. However, archaeologists say as excavations continue, new finds from the Roman era are coming to the surface. They hope to discover artifacts or buildings from the time Thessaloniki was founded, in the era of Cassander, sometime around 300 BC.
3. Long-lost city of ancient Tenea resurfaces – 2018 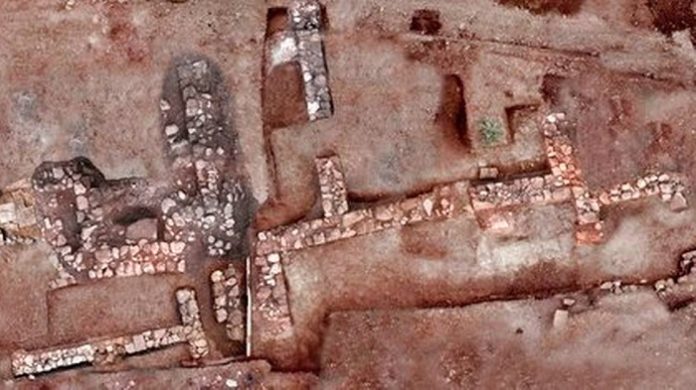 The discovery of the long-lost city of Ancient Tenea is considered among the fifteen largest art historical discoveries of 2018.
Greek archaeologists discovered jewelry, dozens of coins and remnants of a housing settlement, affirming the location of the ancient city thought to have been founded by survivors of the Trojan War in the 12th or 13th century BCE.
Until last year, the location of Tenea had been based mainly on historical references, and the spectacular find finally proved the existence and exact location of the city.
The most recent excavation unearthed seven graves dating to the Roman era and the Hellenistic period, and, for the first time, remnants of a settlement.
4. Oldest extract of Homer’s Odyssey, found in 2018 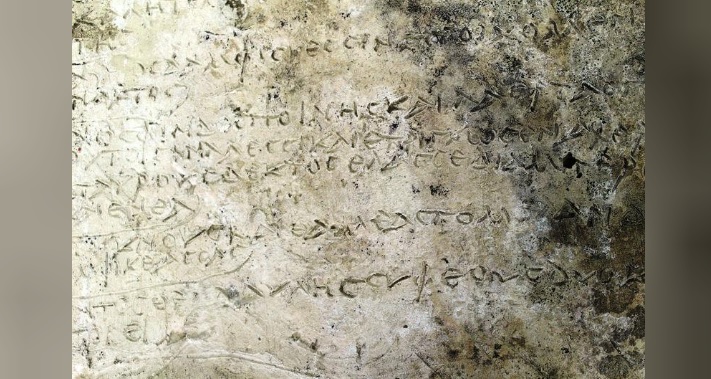 A team of Greek and German researchers found what they believe to be the oldest known extract of Homer’s epic poem “The Odyssey” on an engraved clay plaque in ancient Olympia, the birthplace of the Olympic Games.
The extract comprises thirteen verses from the Odyssey’s “14th Rhapsody”, where the hero Odysseus addresses his lifelong friend Eumaeus. Preliminary estimates date the finding to the Roman era, probably before the third century AD.
The exact date still needs to be confirmed, but the plaque was still “a great archaeological, epigraphic, literary and historical exhibit,” according to the Greek Ministry of Culture.
“The Odyssey”, 12,109 lines of poetry attributed to the ancient Greek poet Homer, tells the epic story of Odysseus, the king of Ithaca, who wanders for 10 years trying to get home after the fall of Troy.
5. Oldest intact shipwreck in the world, discovered in 2018 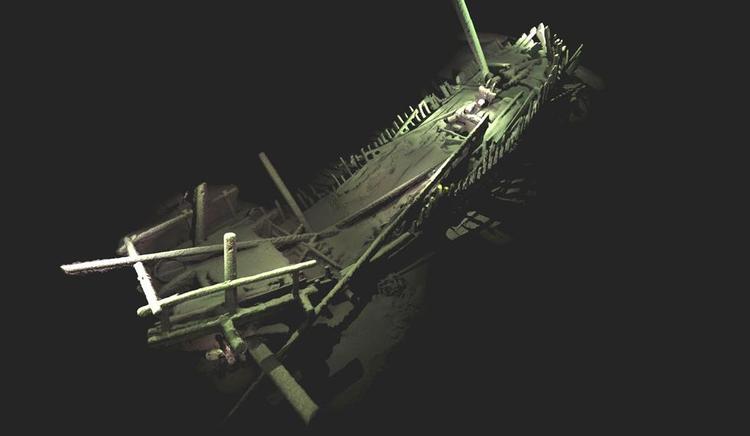 A Greek merchant ship dating back more than 2,400 years was discovered lying upright in the sea off the Bulgarian coast.
The 23m (75 foot) wooden ship, found in the Black Sea by an Anglo-Bulgarian team, was hailed as officially the world’s oldest known intact shipwreck.
Researchers were stunned to find the merchant vessel closely resembled in design a ship which decorated ancient Greek wine vases.
The rudder, rowing benches and even the contents of its hold remain intact. While older shipwrecks have been discovered, what sets this one apart is its incredible state of preservation. This is because the seawater in that area contains almost no oxygen at that depth.
6. Shackled remains, unearthed in 2016 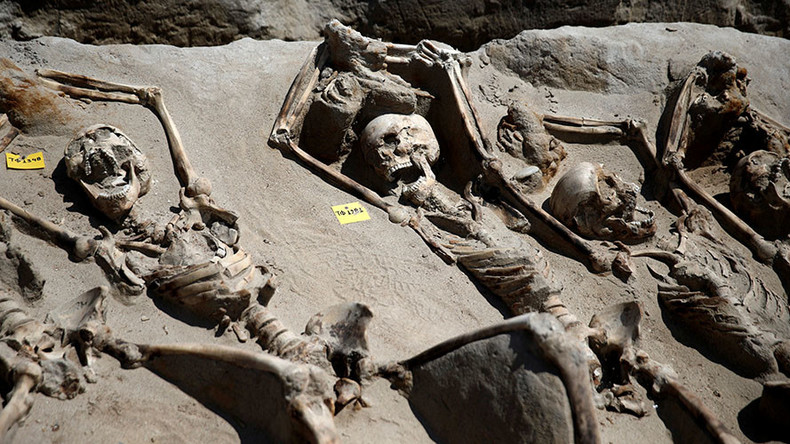 At least 80 skeletons lie in a mass grave in an ancient Greek cemetery, their wrists clamped by iron shackles.They are the victims, say archaeologists, of a mass execution. But who they were, how they got there and why they appear to have been buried with a measure of respect – that all remains a mystery.
They were found in an area of the Falyron Delta necropolis. This is a large ancient cemetery which was unearthed during the construction of a national opera house and library between downtown Athens and the port of Piraeus.
The cemetery dates from between the eighth and fifth centuries BC.
One of the strongest hypotheses is that the executed men had been supporters of Cylon, an Athenian noble and Olympic champion who staged an attempted coup in Athens in 632 BC with the help of his father-in–law, the tyrant of Megara.
The coup failed, and Cylon hid in a temple of the Acropolis. He managed to escape, but the people who backed him were killed.
7. The ancient Marketplace of Argilos, excavated in 2013 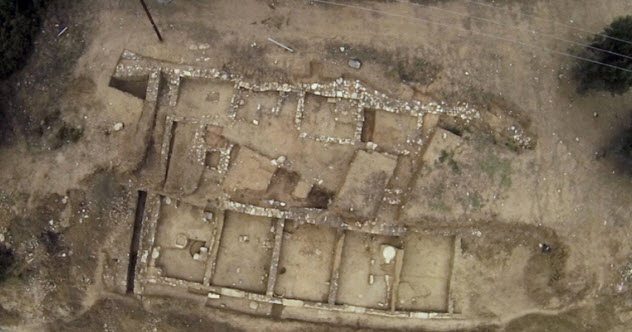 While archaeologists were further excavating the site of the ancient city of Argilos, northern Greece, in 2013, they stumbled upon its “portico”, or a group of shops – something like a modern-day mall.
This ancient marketplace had different qualities than those experts have come across in the past, making it a rare find.
Unlike other porticoes discovered from antiquity, this one was made up of different rooms, suggesting that each shop owner constructed his own place of business.
The ancient marketplace dates back to some 2,500 years ago, making it the oldest portico ever found in northern Greece.
8. Ancient Naval Base at Piraeus Harbor, discovered in 2010 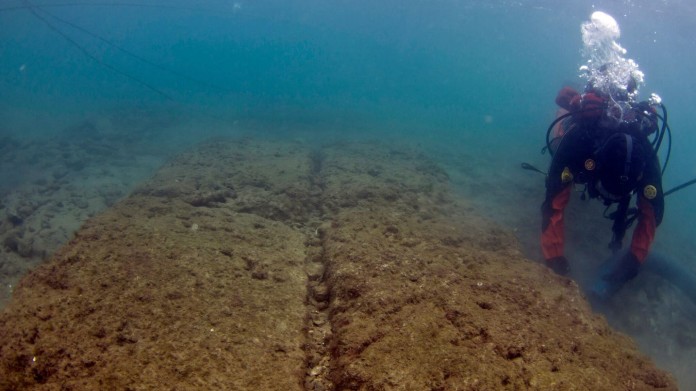 In 2010, a local fisherman guided a group of archaeologists to his favorite fishing spot which he had frequented as a child. He told them he used to sit on ancient columns peeking out from the sea in the northern side of Mounichia in the port of Piraeus.
It turned out that the columns were part of the ruins of an ancient naval base dating back as far as 480 BC.
The ancient Greek naval base played a pivotal role in defeating the Persian Empire in the historical Battle of Salamis, and since its initial discovery in 2010, many new discoveries around the ruins have come to light.
Exploration of the partially-sunken port undertaken by the “Zea Harbor Project” have uncovered ancient boat sheds and other artifacts of ancient Piraeus.
9. 4,000-year-old Pyramid with Plumbing System, 2018 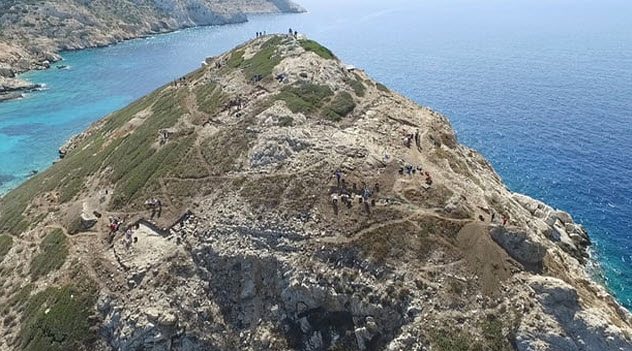 The archaeological site on the Greek island of Keros, consisting of a pyramid-shaped mountain, was already familiar to all; yet no one had any idea what treasures lay inside the pyramid until last year.
High up above the Aegean Sea some 4,000 years ago, the residents of Keros Island carved a cone-shaped mountain along the coast line into terraces resembling a stepped pyramid.
In 2018, researchers looked inside the carved pyramid and were astounded to discover that there was a sophisticated system of drainage tunnels which were one millennium old.
Experts say that the pyramid’s plumbing could have been used to provide fresh water, or may have been used to remove sewage.

10. Underwater treasures of Delos, discovered in 2017 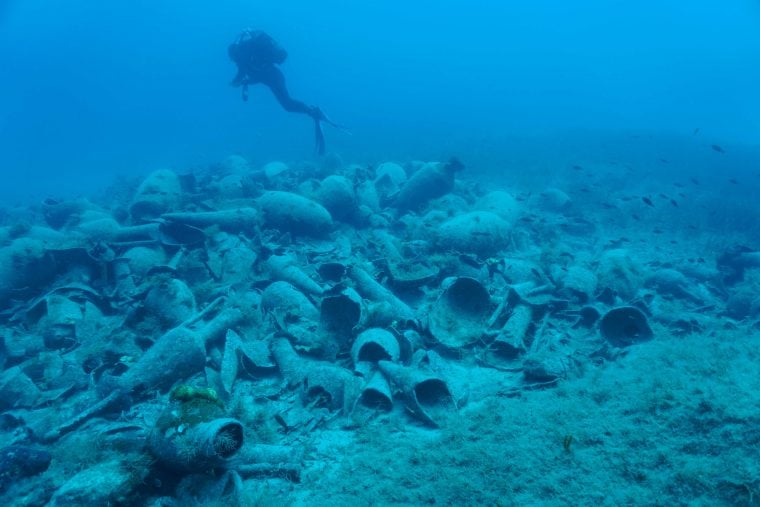 The remains of ancient coastal structures, a port, and a large number of shipwrecks from different eras were found in underwater archaeological excavations conducted by the Ephorate of Underwater Antiquities at the island of Delos. Significant smaller finds were also discovered at the dig two years ago.
The discovery confirmed to experts that the island of Delos was an important trading base along a strategic maritime trade route. The island played a crucial role in linking the eastern and western Mediterranean in ancient times.
Other finds included the remains of walls and a fallen colonnade, as well as the remains of a later Hellenistic-era shipwreck carrying amphorae of oil and wine from Italy and the western Mediterranean.
Two additional shipwrecks from the same era were also discovered off the southern tip of Delos and at Rineia, in Fylladi Bay.