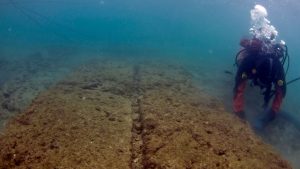 In 2010, a local fisherman guided a group of archaeologists to a favorite fishing spot he frequented as a child. He used to sit on ancient columns peeking out from the sea in the northern side of Mounichia in Piraeus. The columns were part of the ruins of an ancient naval base dating back as far as 480 BC.
The ruins of the ancient Greek naval bases played a pivotal role in defeating the Persian Empire in the historical Battle of Salamis, and since 2010 many new discoveries around the ruins have come to light.
Exploration of the partially sunken port have uncovered sunken ship-sheds from underwater excavations undertaken by Zea Harbor Project. The project takes on both underwater and land archaeology sites of the ancient Zea and Mounichia Harbors in Piraeus, just south of Athens.
According to a recent interview by Haaretz.com, Bjørn Lovén, the director of the Zea Harbor Project, says the discoveries of the naval bases and fortifications of Piraeus are so historically important that they rate with archaeological importance on the level of the Acropolis, Parthenon and the Athenian Agora.
“We have identified, for the first time, the 5th century BC naval bases of Piraeus – the ship-sheds, the slipways and the harbor fortifications,” Lovén enthusiastically told Haaretz.
The project is not without its challenges, as the harbor waters of Piraeus are very active with the traffic from ships coming in and out of the port around the clock, making the waters heavily polluted. Archaeologists have to wear chemical resistant dry suits and full face masks with positive pressure valves to seal themselves off from the water.