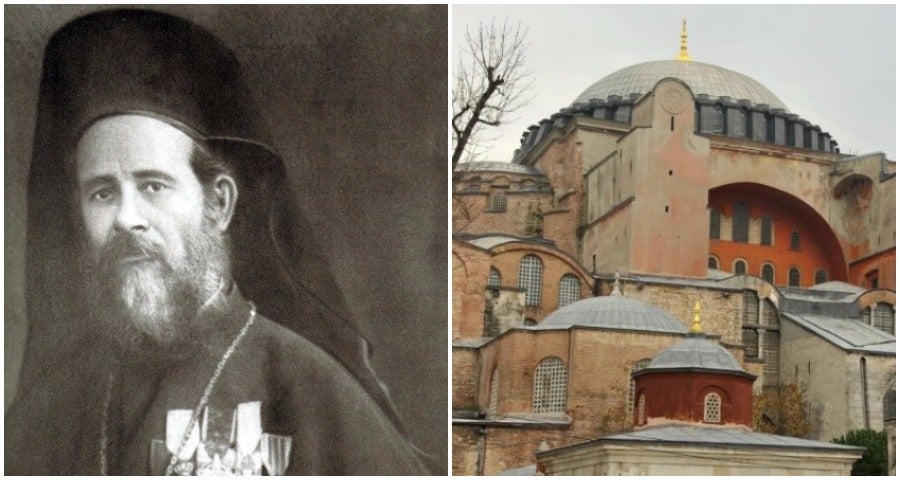 Although it may sound more like wishful thinking than historical fact, there was indeed a brave Greek priest who managed to hold an Orthodox liturgy in Hagia Sophia in 1919, at a time when the iconic cathedral was being used as a mosque.
It is commonly believed that the last Orthodox liturgy in Hagia Sophia in Constantinople took place on May 28, 1453, just one day before the fateful moment that the beacon of Orthodoxy fell into Ottoman hands.
But there was a brave Cretan priest who dared perform the sacred rite once again in the enormous cathedral, and he did so on the 19th of January in 1919. Eleftherios Noufrakis (1872-1941) from Rethymno, Crete was the man who performed this act of heroism out of his love for God and his country.
Inexplicably, Father Noufrakis’ name is not even a footnote in the modern history of Greece.
Thanks to a book by Antonios Stivaktakis called Archimandritis Eleftherios Noufrakis: An Emblematic Figure of Hellenism, the fascinating story of “Papa Lefteris” has now come to light.
Father Eleftherios — or Lefteris — was a chaplain in the military division which participated in the Asia Minor campaign. They had even arrived at the very gates of Ankara, before their later catastrophic defeat at the Sakarya River.
Yet there was a tiny sliver of hope, and of redemption, in those savage years of the military campaign. And it was all thanks to the lion-hearted Cretan from the Alones village of Rethymno.
Father Eleftherios was the chaplain for the Second Greek Division, one of the two divisions which were part of the allied expeditionary force sent to Ukraine in early 1919.
On their way to Ukraine, the Greek unit briefly stopped in Constantinople, which had found itself under the control of the Allies at the end of World War I, after both the Turks and the Germans were defeated.
One day, a group of Greek officers, comprised of Brigadier Frantzis, Major Liaromatis, Captain Stamatios and Lieutenant Nicholas, led by the intrepid Cretan priest, gazed upon the city of Constantinople and Hagia Sophia, from their ship.
They had a secret smile in their hearts, because the previous night they had made a great decision: They were to disembark in the city and celebrate an Orthodox Holy Liturgy in Hagia Sophia.
The impetuous — some might even say foolish — plan was the brainchild of Father Eleftherios.
The men knew their mission was next to impossible. Hagia Sophia was still a mosque, and surely it was guarded. Additionally, Muslims were free to go there to pray whenever they wished, and at any given time the church could be filled with people.
And then there were their own Greek army superiors, who would be against any such act, since it would pose an extraordinarily difficult problem for diplomacy, putting it mildly.
But Papa Lefteris had made his decision, and he was determined and assertive. He asked Constantine Liaromatis to be his chanter for the religious service. The Major agreed, and eventually all the men in the group followed along with them.
The ship carrying the Division anchored out in the harbor, so the men boarded a smaller boat, manned by a Greek boatman, and they were ferried into the city. Kosmas, the native boatman, tied up the vessel and then providentially led the priest and the officers along the shortest path to Hagia Sophia.
The door to the great cathedral, once the largest edifice in Christendom, was open but a guard tried to ask them in Turkish what they were trying to do. Brigadier Frantzis merely shot him a look that made the guard stop in his tracks. 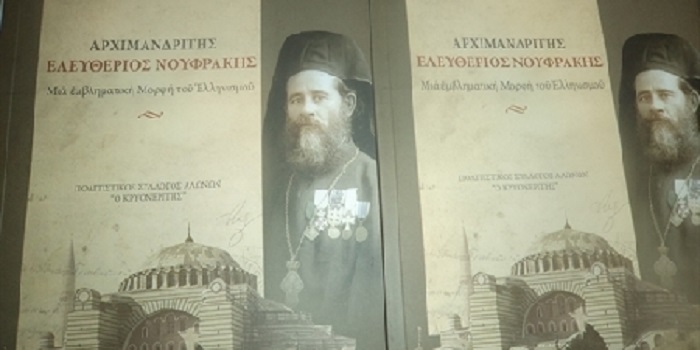 The Greek men entered Hagia Sophia with great reverence and crossed themselves. Papa Lefteris is then said to have whispered with great emotion: “I will enter into Your house, and I will venerate towards Your Holy Temple with fear…” (from Psalm 5, verse 7 in the Old Testament).
Father Eleftherios moved quickly, identifying the location of the Sanctuary and the Holy Altar. Finding a small table, he put it into place, then opened his bag and took out everything needed for the Divine Liturgy. Then he put on his stole and began, saying:
“Blessed is the Kingdom of the Father and of the Son and of the Holy Spirit, now and forever, and unto the ages of ages.”
“Amen,” responded Major Liaromatis, and the Divine Liturgy at Hagia Sophia, the first one to have taken place in nearly 500 years, commenced.
The group of Greeks crossed themselves with devotion, still unable to believe that they were inside Hagia Sophia, centuries after it had fallen into the hands of Muslims. And most importantly, they were even taking part in a Divine Liturgy in the most sacred place of Orthodoxy.
The Liturgy went on as normal. After 466 years, Hagia Sophia was serving again as a temple of Christianity, the sounds of Greek psalms echoing against its sacred walls.
Papa Lefteris read the Gospel for that day, while the Epistle was read by Brigadier Frantzis. The duties of the sacristan were performed by Lieutenant Nicholas.
Meanwhile, Turks had started entering the Church. They apparently simply could not fathom what was happening before their eyes. Father Eleftherios continued the liturgy completely unperturbed.
The Turks watched in silence, still unable to grasp at that point what was actually taking place inside the Church.
Papa Lefteris placed the antimension on the table, to do the Proskomidi. He then took a small Holy Chalice out of his bag, as well as a paten, a knife and a small prosphoron with a small bottle of wine.
With sacred emotion and devotion, the priest performed the Proskomidi. When that was completed, he turned to Lieutenant Nicholas and told him to light a candle so he could follow him during the Great Entrance. The young Lieutenant went ahead and lit the candle, while behind him the priest intoned the prayer: “May the Lord God remember all of us….”
More Turks had entered Hagia Sophia during the Proskomidi, and the atmosphere was beginning to change. At the same time, Greeks from Constantinople had started filing into the Church as well. They followed the remaining of the Liturgy with devotion, but as discreetly as possible, for fear of the Turks.
When the Liturgy reached its most sacred point – the Anaphora – Father Noufrakis said with an emotional voice: “Your own of Your own, we offer to You, for all and through all.” The officers knelt and the voice of Major Liaromatis could be heard chanting: “We sing to You, we bless You, we thank You, Lord, and we pray to You, our God.”
After a short while, the bloodless sacrifice of Christ was completed in Hagia Sophia, after 466 long years.
It was followed by the “Axion Estin,” the “Our Father,” and the words “With the fear of God, faith and love draw near,” when all the officers approached to commune from the Immaculate Mysteries.
Papa Lefteris quickly said the Communion prayers while Liaromatis chanted: “Blessed be the Name of the Lord…,” while all the rest of the officers received Holy Communion. The priest then told Lieutenant Nicholas, “Gather everything quickly and put it in the bag,” before saying the prayers of the Dismissal.
The Divine Liturgy in Hagia Sophia was now completed. It was a tremendous feat of courage that most Greeks couldn’t even begin to dream of.
But by the time the brave Greeks were ready to leave, the Church was full of angry Turks who had finally realized what was going on. The Greeks were in danger. They walked close to each other as one body, and proceeded toward the exit. 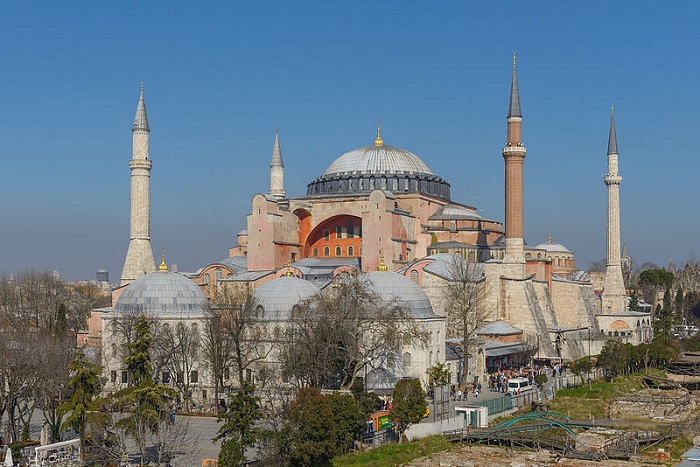 As the Turks were ready to attack the five Greek men, a Turkish official suddenly presented himself, with others following him close behind. His startling words were “Let them pass.”
He actually said the words with hatred, but it was not in his country’s interest at the moment to kill or arrest the Greek men. After all, two Greek Divisions were in Constantinople at the time and the city was essentially in the hands of the victors of World War I.
Papa Noufrakis and the other officers were then able to exit Hagia Sophia, and they then headed for the waterfront, where Kosmas and his boat were waiting for them. Outside the Church a burly Turk ran forward, trying to hit the Greek priest with a stick.
Although Papa-Lefteris tried to avoid the hit, the stick got him on the shoulder. The pain was unbearable and brought him to his knees, but he gathered his strength, got up, and continued walking toward the pier.
Meanwhile, Major Liaromatis and Captain Stamatios were able to disarm the Turk, who was readying to hit the priest again.
The five men finally made it to the waterfront and jumped in Kosmas’ boat, and he began rowing as fast as he could. Soon the were able to board the Greek warship, safe and sound — and victorious.
However, their daring act did end up causing an inevitable diplomatic brouhaha. The Allies came together as a group and severely condemned the action in a protest to Greek Prime Minister Eleftherios Venizelos, who was forced to reprimand Papa Lefteris.
But Venizelos later secretly contacted the brave Greek priest and congratulated him for the immense courage and patriotism that he had shown. Father Eleftherios Noufrakis had fulfilled the secret wish of an entire nation, even if it was for just a brief moment in time.