GRNews
GreekReporter.comGreeceThe Historical Memory of Constantinople, 567 Years After the Fall

The Historical Memory of Constantinople, 567 Years After the Fall 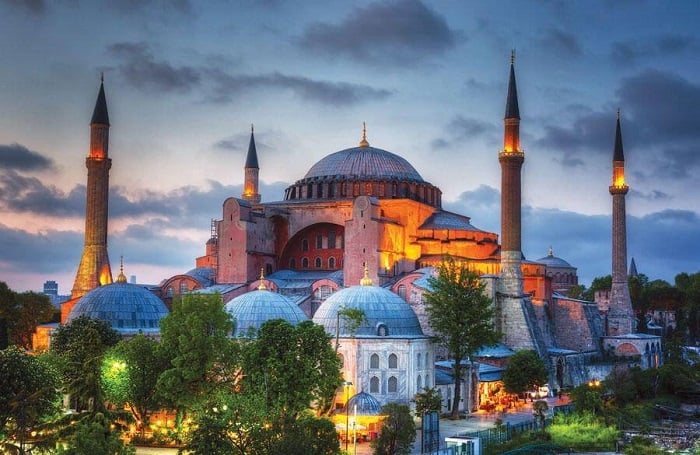 Michael Goodyear*
May 29, 1453: the final Ottoman assault on Constantinople succeeds. Ottoman cannon fire had battered the great Theodosian Walls of the city. The last Byzantine emperor, Constantine XI Palaiologos-Dragases, had torn off his imperial regalia and died fighting as a common soldier.
Ottoman troops plundered as Ottoman sultan Mehmet II marched through the city before coming to that most famous of Christian cathedrals, Hagia Sophia, converting it to a mosque, and thanking God for his victory.
Constantinople was to be the new capital of the growing Ottoman Empire. The Byzantine Empire, this state of the Romans which stretched more than two millennia back into history, was, at last, no more.


Europe received the news of the fall of Constantinople with unmitigated horror. The great city, the bastion of Christendom against the Muslim tide, had fallen. Pope Nicholas V called for yet another Crusade. Holy Roman Emperor Frederick III convened three imperial diets to discuss a counterattack to retake the great city.
Renaissance composer Guillaume Dufay even penned a lament to the city, describing its loss as full of “grievous torment and sorrowful rage.” The future Pope Pius II called 1453 “a second death for Homer and a second destruction of Plato.”
The contemporary Byzantine historian Doukas lamented Constantinople’s fall, writing “O City, City, head of all cities! O City, City, the center of the four corners of the earth! … Shudder, O Sun! And you too, O Earth, heave a heavy sigh at the utter abandonment by God.”
To the triumphant Ottoman Turks, glorious Constantinople, that greatest of prizes, was now theirs. For the descendants of the Byzantines, or the Ρωμαίοι (Romaioi, or Romans) as they called themselves, the long, lingering memory of the lost city, which at times reached a fever pitch of progonoplexia, or an obsession with our ancestors, had just begun.

Remembering Byzantium Under Ottoman Rule
Following the fall of Constantinople, the rest of the Greek-speaking world was swiftly conquered by the Ottomans. Athens fell in 1456, the Morea in 1460, Trebizond in 1461. Cyprus and Crete held out for longer, but by 1669, practically the entire Greek world was under Ottoman rule.
Yet the Romaioi did not become assimilated, but miraculously maintained their distinct culture. Throughout this 400-year period of Ottoman domination, the historical memory of independence which was most prominent for the Romaioi was not that of classical, ancient Greece, but of Christian Byzantium.
While ethnic Greek Romaioi, called “Phanariotes,” would continue to live in Constantinople under Ottoman rule, the memory of the glories of Byzantine Constantinople would dominate the entire mindset of the larger Greek-speaking Romaioi community as well.

Under the Ottomans, religion was the primary identifier of peoples, not ethnicity, and the term “Hellene” had been derided as a word for pagan since the fourth century; all of this contributed to a greater identification of ethnic Greeks with their immediate Byzantine/Roman ancestors than with the ancient Greeks of Athens and Sparta.
Ioannis Pringos, a eighteenth century Greek merchant from Zagora who resided in Amsterdam, asked “Until when will the crescent moon, which controls the city of Constantine, reign?” Following a supposed prophecy from the Byzantine emperor Leo VI, Pringos believed that the time was nigh to recover the “Empire of the Romans.”
The Greek political thinker Rigas Feraios conceived of a Pan-Balkan federation in the late eighteenth century, using the Byzantine Empire as his model. In 1870, Greek chronicler Athanasios Komninos Ypsilantis wrote that “the Greeks were to be liberated from the Ottoman slavery and the Roman Empire was to be resurrected.”
When the island of Lemnos was finally liberated from Ottoman rule by the Greek Army in 1912, the local boys went to look at the soldiers. The soldiers asked “What are you looking at?” to which the children replied, “At Hellenes.” The soldiers responded, “Are you not Hellenes yourselves?” The boys answered, “No, we are Romans.”
The memory of the past for ethnic Greeks — even up to a century ago — was primarily not ancient Greece, but their identity as Romaioi, their collective memory of Byzantium, and the dream of its recovery.
The Megali Idea
After Greece won its independence in 1830, the recovery of Constantinople began to seem that it might not be just a dream, but could possibly become reality. While the newly independent Greek state consisted of little more than the Peloponnese and Attica, modern Greece had dreams of regaining its historical grandeur.
The driving goal for the new Greek state after independence was the Μεγάλη Ιδέα (Megali Idea), first coined by Prime Minister Ioannis Kolettis in 1844 as the dream of recovering “any land associated with Greek history or the Greek race.” The greatest aim of the Megali Idea was to recapture Constantinople, “the great capital, the dream and hope of all Greeks.”

Throughout the nineteenth century and early twentieth century, Greece pushed forward, recovering more and more Greek-settled lands from Ottoman rule. The Megali Idea had as its rallying cry, “Πάλι με χρόνια με καιρούς, πάλι δικά μας θα ‘ναι!” (“Once more, as years and time go by, once more they shall be ours!”).
Thessaly was retaken in 1881; Epiros, the Aegean islands and Macedonia were conquered from the Ottomans in 1913. The new king in 1913 was Constantine I, aptly named just like the first and last emperors of Constantinople; he was even referred to on occasion as Constantine XII, the direct successor of Constantine XI Palaiologos-Dragases.
Finally, in the aftermath of World War I, Greece was granted Ionia, the area around the city of Smyrna, in Anatolia, as well as Thrace, with the boundaries of the new Greek territory now approaching the very gates of Constantinople itself.
Greek forces were initially successfully in occupying these new territories and countering Turkish forces, with the dream of recovering Constantinople seemingly within their grasp. But the resurgent Turkish forces under Mustafa Kemal (later called Atatürk) halted the Greek advance at the Battle of Sakarya in 1921 and destroyed the Greek forces at the Battle of Dumlupınar one year later.
The ruinous aftermath of the campaign was the torching of Smyrna by Turkish soldiers as Greeks desperately attempted to flee the flames and the ensuing bloodshed.
Along with Smyrna, the glorious dreams of the Megali Idea and a restored Byzantium also went up in flames. Greece lost its newly-won Turkish territories and the Greek population in Anatolia was forcibly transported to Greece as part of a population exchange under the resulting Treaty of Lausanne.

Still a Memory?
Although the recovery of Constantinople and the restoration of Byzantium appeared to die on the docks of Smyrna, Constantinople has not fully disappeared from the historical and collective memory of the Greek people.
The Greek population in Constantinople was exempted from the population exchange of 1923, but their gradual exodus from the city was accelerated by the anti-Greek Turkish pogrom of September 6-7, 1955, which resulted in the destruction of Greek property and the injury and even deaths of ethnic Greeks living in Constantinople.
The Greek population in Constantinople today is no more than a remnant of a few thousand, with some estimates as low as 2,000.
Yet Constantinople still holds a precious place in history and in the minds of Greeks around the world. Perhaps most important among the surviving Greek community in Istanbul is the Patriarchate of Constantinople, that most revered of Orthodox Christian religious institutions; indeed, most of its funding today comes from the Greek government.
In addition, Byzantine-era monuments still exist in Constantinople, including the Theodosian Walls, the ruins of two Byzantine palaces, and approximately a dozen Byzantine churches (albeit most having been converted to mosques), including the great Hagia Sophia, still open as a museum today.

The picture in Greece itself and among the diaspora, however, is more complicated. The importance of classical Greece in the Greek mind steadily rose during the nineteenth and twentieth centuries, influenced by the stress on ancient Greece by the first Greek king, Otto, but also because of the placement of the new Greek capital.
Athens was an important city in classical Greece but had dwindled in importance, serving as only a minor provincial town during the Byzantine era, and it has few Byzantine monuments today.
In today’s Athens, Byzantine emperors and heroes hardly hold pride of place like those of ancient Greece, such as Leonidas and Pericles, nor are their scholars household names like Plato and Aristotle. From tourists’ T-shirts in Plaka to memes on Greek Facebook pages, the position of classical Greece over that of Byzantium in Greeks’ historical memory is palpable.
Yet despite this emphasis, Constantinople does still matter for Greeks. A search of Kathimerini newspaper’s archives shows that 11,433 articles have been written about “Κωνσταντινούπολη” — just since the year 2001. Major diaspora publications such as Greek Reporter and Greek City Times also frequently publish articles on Byzantium, and Constantinople in particular.
Even today, we still refer to Constantinople in Greek not as Istanbul, but as Κωνσταντινούπολη. A statute of the last Byzantine emperor, Constantine XI, even graces downtown Athens.
So 567 years after Constantinople’s traumatic fall to the Ottoman army of Mehmet II, the memory of Byzantine Constantinople has still not disappeared. It may no longer elicit the same recognition among Greeks or the global population as does ancient Greek history, but it has continued to make its mark on Greek historical memory from 1453 through today, both as an influence on policy and as a source of pride in the past.
*Michael Goodyear has a J.D. from the University of Michigan Law School and an A.B. in History and Near Eastern Languages and Civilizations from the University of Chicago, where he specialized in Byzantine history. He has been published in a variety of academic and general-interest publications on history and law, including Le Monde Diplomatique, The Medieval Magazine, and the Harvard Journal of Sports and Entertainment Law.