GRNews
GreekReporter.comGreeceArchbishop Ieronymos on Religious Studies: 'The Misunderstanding Has Been Resolved!'

Archbishop Ieronymos on Religious Studies: 'The Misunderstanding Has Been Resolved!' 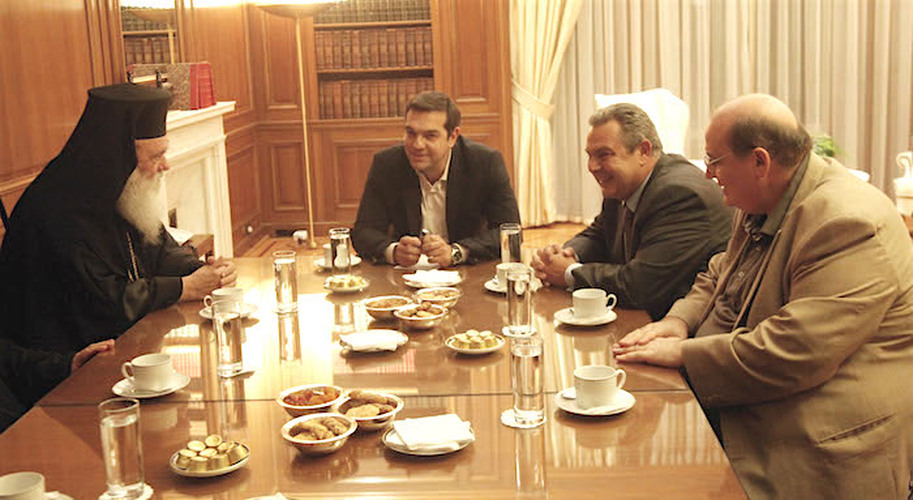 The crucial meeting to discuss religious studies as part of the education curriculum took place at Maximos Mansion, despite an initial statement by a representative of the Athens Archdiocese that Archbishop Ieronymos would not be present at the same table as Education Minister Nikos Filis. Prime Minister Alexis Tsipras and Athens Archbishop Ieronymos met following a request by the latter. Filis and the Independent Greeks (ANEL) leader Panos Kammenos were present at the meeting that took place in a positive climate.
A triumphant Archbishop Ieronymos emerged from the meeting accompanied by the bishops of Sparta, Fthiotida and Mesogaia as well as his legal consultant Theodoros Papageorgiou. “Misunderstandings ended, and dialogue will continue,” said Archbishop Ieronymos, who said that dialogue will continue on the way in which the lesson is taught, however, the old books are to continue being used and the effort to revise these will continue in collaboration with the church. His request that the lesson should be reviewed with the church from scratch was accepted.
Kammenos, the right-wing junior partner of the SYRIZA government, emerged from the meeting with a clear message of unity between the church and state. He said dialogue will continue regarding the matter of religious studies with Orthodoxy in mind.
On his part, Filis, who had recently made controversial statements between the Church’s role during the dictatorship and who wants to see education reform said that the meeting was held in a good climate, agreeing that “misunderstandings are over.” He said that the lesson will be evaluated and the church’s view will be heard, however, he said that new programs are already out and the state is the institution ultimately responsible for the way in which lessons are approached. He said that the approach to religious studies will not be “dogmatic.”