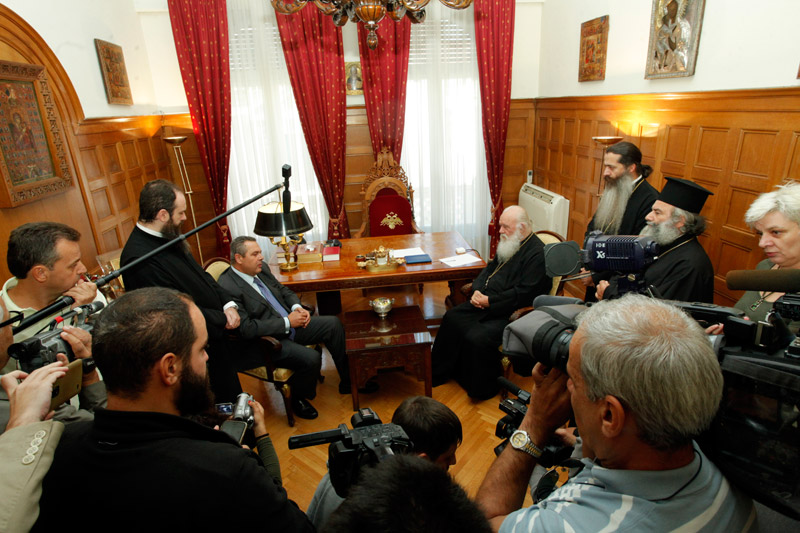 Independent Greeks (ANEL) leader Panos Kammenos, a junior coalition partner with the Radical Left Coalition (SYRIZA) government, met with Archbishop Ieronymos on Wednesday. During their meeting, Kammenos said that any changes to the religious lesson on the syllabus will need to be approved by church authorities, and he suggested that he would block plans by the Greek Ministry of Education to change the character of religious studies being taught in schools. The planned changes are a source of friction between the government and the Greek Orthodox Church.
Kammenos did not name Education Minister Nikos Filis, but distanced himself from statements made by the SYRIZA deputy concerning the role of the Greek Orthodox Church during the 1967-1974 military dictatorship.
“I assure you that the prime minister (Alexis Tsipras) by no means wants to cut ties between the Orthodox faith and our nation,” said Kammenos in reference to Tsipras’ speech in Greek Parliament on Wednesday.
During his speech, Tsipras defended plans to scrap the “indoctrinating” character of religious studies as taught in schools. He said that these lessons should be purely informative and educational rather than dogmatic. “Pupils need to perceive religion as a facet of social reality,” said Tsipras, speaking to deputies.
Archbishop Ieronymos pointed to Germany as a model in solving matters between the church and the state. He also asked: “If the Church doesn’t have a say in religious studies, then who does?”