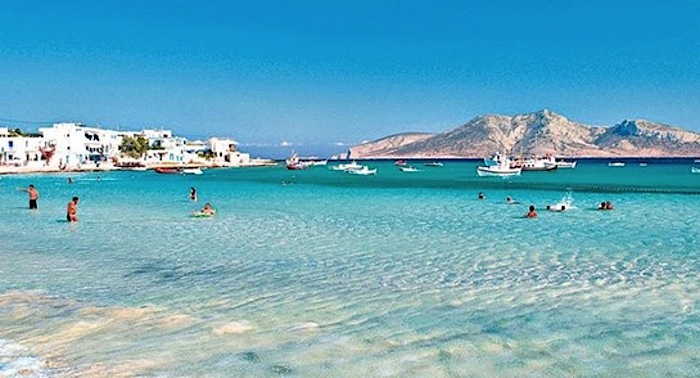 Follow us on a quick trip to the “Small Cyclades” and enjoy enticing spots by the sea, crystal-clear waters, gorgeous sand beaches, picturesque whitewashed houses and the most beautiful sunsets you will ever experience!
Donoussa 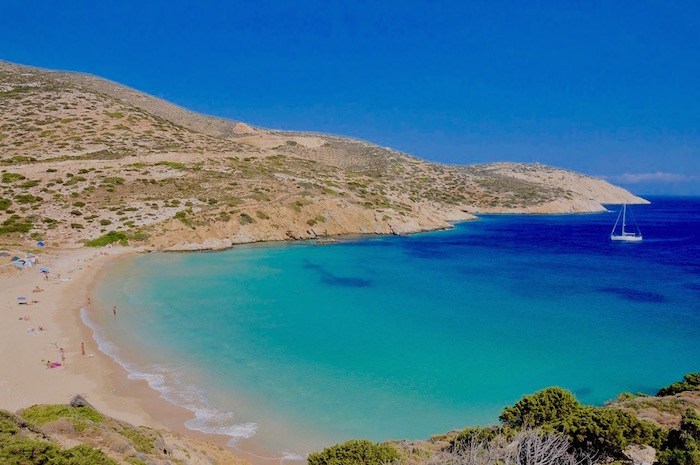 According to Greek mythology, Donoussa is the island to which Dionysos decided to take Ariadne so that Theseus could not locate her. Donoussa is located on the northeastern part of the Small Cyclades archipelago about 14 nautical miles north of Amorgos and 15 east of Naxos.
The island is dotted with small white houses, well-hidden along picturesque trails which are adorned with colorful bougainvilleas. Its hills are covered in cedar trees, while its tiny ports feature expanses of the finest white sand.
Around 163 permanent residents live in the island’s five small, picturesque villages of Stavros, Kaloritissa, Troulos, Mesaria (Charavgi) and Mersini. During Roman times, Donoussa was said to be a place for political exiles; later on it became a hiding place for pirates, while the island was also inhabited during the years of the Turkish occupation.
The island became world-famous at the beginning of World War I, in 1914, when the German cruiser “Goeben” sailed into Donoussa’s harbor, pursued by the British fleet. At the bottom of the sea off Kedros, one can discern the outlines of a German ship that was sunk by the Allies during World War II.
Koufonissia 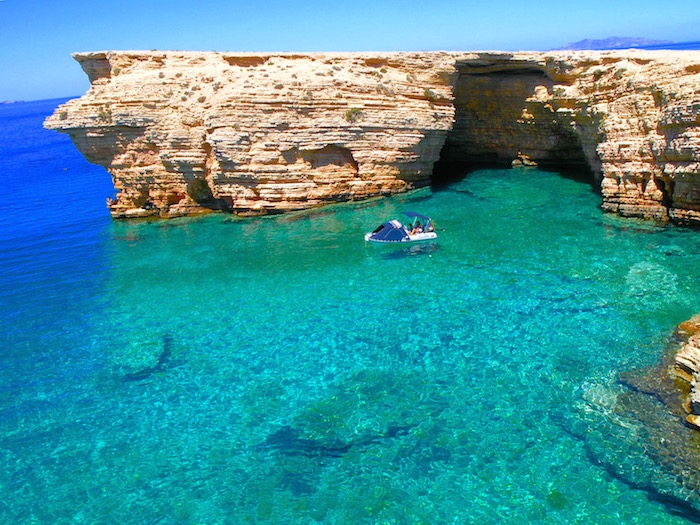 This is a small, simply divine pair of islands with approximately 366 residents, situated on the west side of Amorgos and the southeast side of Naxos. Pano Koufonissi has its port on the southwest coast of the island. It is a vivid example of the stunning, white Cycladic architecture. Kato Koufonissi has just a small number of rural houses, mainly inhabited during the summer months, and Venetsanos’ famous tavern.
With its golden beaches and rocks that are kissed by the salty, crystal-clear Greek waters, Koufonissia is a magical destination for your summer holidays. On Pano Koufonissi’s North Cape, you can discover several sea caves, while Saint George’s, Saint Nicholas’ and Panagia’s churches are  definitely worth a visit. Don’t forget to refresh yourselves with a cool and tasty drink at Mylos, a traditional windmill that has been turned into a bar.
Schinoussa 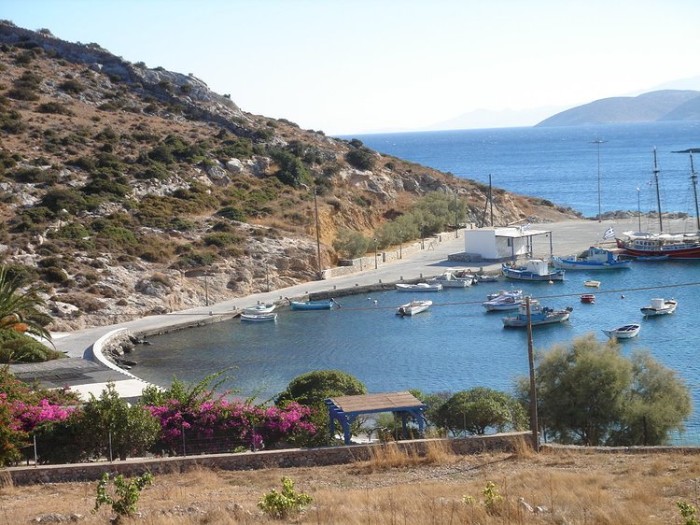 Schinoussa, with its numerous peninsulas and bays, verdant hillsides, low hills and small valleys, is located south of Naxos, between Koufonissia and Heraklia. It has 206 permanent residents.
The island’s port, called Mersini, is one of the best secret, pocket harbors, for vessels travelling in the Aegean Sea. Just 1200 meters from Schinoussa’s port, visitors will have the opportunity to visit Chora or Panagia and enjoy panoramic views, while Messaria is another good option for summer fun and relaxation.
A visit to the Church called the Annunciation of the Virgin Mary in Messaria, as well as and Panagia Akathis Church in Chora will be a feast for the eyes and the spirit. At the Folklore Museum you can admire tools and utensils, as well as traditional costumes from ancient times. The island also has three windmills and two caves, Maniatis’ cave and Fishermen’s cave, which are ready to be explored by brave spelunkers.
Heraklia 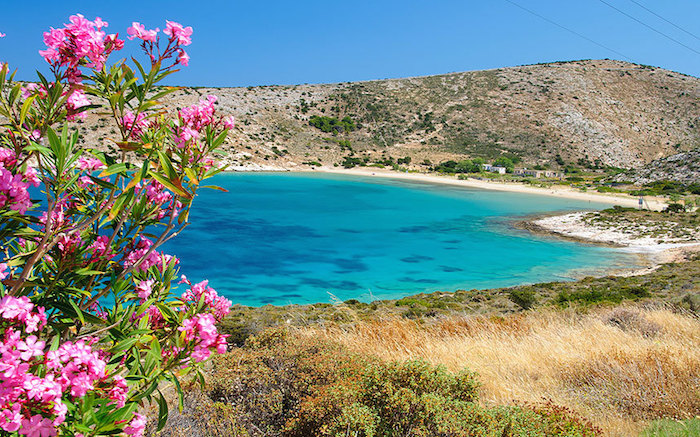 The western island of the Small Cyclades complex, called Heraklia, is situated eighteen nautical miles off the Chora of Naxos, six nautical miles east of Ios and nineteen nautical miles from Katapola of Amorgos.
Although it is a mountainous island, Heraklia has rich vegetation consisting of Indian figs, cedar trees and springs. Agios Giorgios Port, Panagia or Pano Mera and Agios Athanasios are the main settlements of its 151 inhabitants. In the area of Kambos Aghiou Athanasiou and Aghios Mamas you can explore two small settlements from the Protocycladic period, while in the area of Kastro in Livadi you can visit the ruins of a fortified village from the Hellenistic period, which used to host a temple of Zeus and a sanctuary of the goddess Tyche.
In Saint John’s cave visitors can admire a rich array of stalactites and stalagmites, while in the nearby Cyclop’s cave, visitors can even see where the mythological Cyclops used to live!
Keros 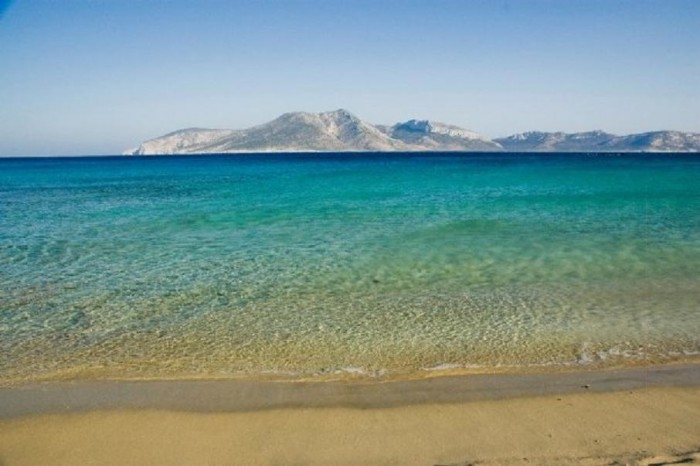 This rocky island, 1,5 nautical miles southeast of Koufonissi, is nowadays uninhabited although it once used to be an important center of the Cycladic civilization during the Prehistoric Era. The island’s silhouette is extremely impressive, as it resembles a woman lying on her back.
The famous “Flautist” and “Harpist” statuettes, as well several marble and ceramic objects, now on display at the National Archaeological Museum of Athens, were discovered on this island. Several discoveries of the “Thesaurus of Keros,” consisting mainly of marble statuettes, marble and ceramic vessels, as well as stone utensils, are on display at the Museum of Cycladic Art in Athens.