GRNews
GreekReporter.comGreeceProkopis Pavlopoulos Sworn In as the Seventh President of the Hellenic Republic 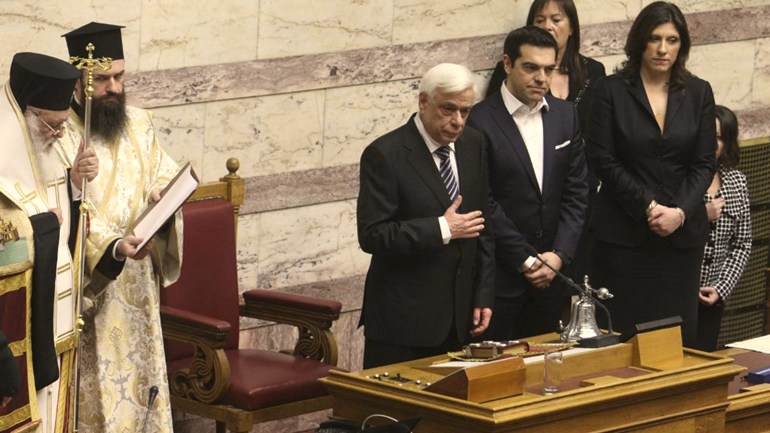 Newly elected President of the Hellenic Republic Prokopis Pavlopoulos was sworn in earlier today at a ceremony in the country’s Parliament, amid heavy rain. The new Greek President took the traditional oath administered by Archbishop Ieronymos. Pavlopoulos, who is Greece ’s former Interior Minister in Costas Karamanlis’ cabinet, is the seventh President of the Hellenic Republic.
The Greek President recited the following religious oath before the Parliament: “I swear in the name of the Holy and consubstantial and Indivisible Trinity to safeguard the Constitution and the laws, to care for the faithful observance thereof, to defend the national independence and territorial integrity of the Country, to protect the rights and liberties of the Greeks and to serve the general interest and the progress of the Greek People.”
After the ceremony, Pavlopoulos laid a wreath at the Tomb of the Unknown Soldier in downtown Athens and then went to the Presidential Mansion to assume his new responsibilities, replacing Karolos Papoulias, who headed Greece for 10 years.
The former New Democracy Minister was nominated for the Greek Presidency by newly elected Prime Minister Alexis Tsipras last month. Pavlopoulos was elected in his new post on February 18 with 233 positive votes, while he needed to secure over 180 out of 300 votes in order to win the election. He was elected for a five-year term. Pavlopoulos’ nomination was also supported by New Democracy and junior coalition partner Independent Greeks (ANEL). The second candidate, nominated by opposition party “To Potami” and supported by PASOK was Nicos Alivizatos.
The Greek Parliament had failed to elect a new President three times in late 2014. The last attempt was made on December 29, 2014, and in line with the Greek Constitution, a general election was held in the country within a month of the failed vote. On January 25, leftist SYRIZA won the snap elections.
Who is Prokopis Pavlopoulos?
Sixty-four-year-old Pavlopoulos was born in Kalamata and attended the Law School of the University of Athens in 1968. In addition, he studied law at Universite de Paris II on a French Government scholarship and was awarded his postgraduate studies Diplome d’ etudes approfondies (DEA) in 1975 and his doctorate in Public Law in 1977 with honorable mention. From 1978 to 1979 he served his military service in Greece. He was elected a Lecturer at the University of Athens in 1980 and was promoted to Reader in 1981. In 1983, he became Assistant Professor and was later promoted to Associate Professor in 1986. In 1989, he was elected Professor of Administrative Law.
In 1974, he was appointed as secretary of Greek President Michail Stasinopoulos. He first served as an Alternate Minister for the Presidency from November 1989 to April 1990 and was also the spokesperson of Xenophon Zolotas’ ecumenical government. From 1990 to 1995 he was the legal adviser of President Konstantinos Karamanlis. He was elected as MP for the New Democracy party in the 1996 parliamentary election. He was appointed as New Democracy’s Press and Information Spokesman by party President Miltiadis Evert on April 1996. In 2000, 2004, 2007, 2009 and 2012, he was nominated and elected as MP representing the Athens First Electoral Constituency. He became New Democracy’s Parliamentary Spokesman in April 2000. Following the March 2004 general elections – won by New Democracy- Pavlopoulos became Interior, Public Administration and Decentralization Minister in the new government of Prime Minister Kostas Karamanlis on March 10, 2004. Following the 2007 general elections, won again by New Democracy, the Interior Ministry merged with the Public Order Ministry, of which Pavlopoulos became Minister.
Pavlopoulos is a member of New Democracy’s Central Committee and in 2004 was designated as a member of the party’s Political Council, as one of seven MP candidates.
He is married to Vlassia Pavlopoulou-Peltsemi and has two daughters and one son.