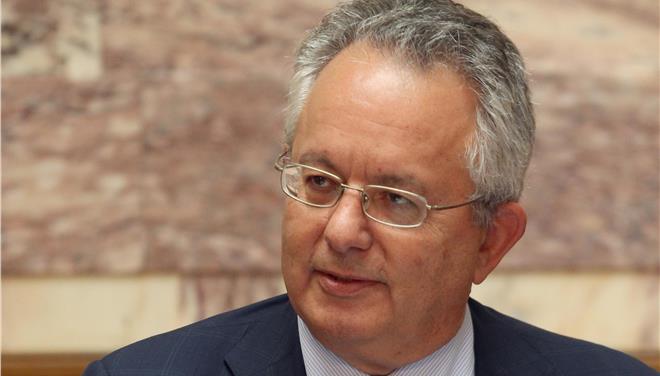 Greek opposition party To Potami in a statement issued by its leader, Stavros Theodorakis, has expressed its disagreement with SYRIZA’s nomination of former New Democracy Minister Prokopis Pavlopoulos for the Presidency of the Republic. Mr. Theodorakis stated, his party will nominate Professor of Constitutional Law, Nicos Alivizatos for the first presidential ballot on February 18.
Announcing the nomination, Mr. Theodorakis described Nicos Alivizatos as “an uncompromising defender of human rights, a university teacher, enjoying universal acceptance, who has fostered the new generation of Greek lawyers and a scientist with European refulgence even from the very first steps of his career.” Furthermore, Mr. Theodorakis justified his party’s choice by explaining that his nominee is “an active citizen, who was never trapped in the narrow confines of party formations, but with courage and knowledge, has always left his distinct imprint in public life.”
In response to the nomination, Mr. Alivizatos stated that “under the present circumstances and in the aftermath of the elections, it is everyone’s duty to help address the unprecedented problems the country is facing.” In this manner, he added, “I believe that positive results can only be achieved with wider consensus, thus I accept the honorary proposal by the head of To Potami, Mr. Stavros Theodorakis, and I want to thank him.”
It should be noted that Mr. Theodorakis stated while addressing his party’s Parliamentary Group, that “if we like the government’s nominee for the Presidency of the Hellenic Republic we will vote for it, otherwise we will table our own proposal.” At the same time, other party members have underlined that the nominee should not necessarily be a politician as Greece has an adequate number of acclaimed scientists and people of that have contributed to the country.
Mr. Alivizatos’ nomination will also be supported by PASOK MPs who have already expressed their disagreement with the nomination of Prokopis Pavlopoulos, by the Prime Minister, Alexis Tsipras.
Who is Nicos Alivizatos?
Nicos Alivizatos was born in Athens in 1949 but his family originates from the islands of Cefalonia and Chios. He studied law in Athens, where he obtained his LL.B. in 1972, and in Paris, where he obtained his doctorate degree (doctorat d’ Etat) in 1977.
He has been practicing law in Athens since 1978 and specializes in public law litigation, in particular property law, media law, law of education, environmental law and minority rights. He pleads regularly before the Council of State (Greece’s Supreme Administrative Law) and the European Court of Human Rights in Strasbourg. He has been among others involved in the following litigations: the tracing of the Hymettus Circular Road, the indemnization of good faith owners of properties that have been seized for the protection of the environment, the diversion of the Acheloos river, the fate of the Greek royal family’s properties and, finally, the application of the Ecumenical Patriarchate against Turkey, concerning the orphanage of the island of Pringipos.
He is a Professor at the Faculty of Law of the University of Athens, where has been teaching Constitutional Law since 1980. In addition, he has been a Visiting Scholar at the Universities of Stanford (1989), Princeton (1997) and Oxford (2005). Furthermore, Mr. Alivizatos has a member of the National Broadcasting Authority (1989-90), of the Data Protection Authority (1997-2002), of the European Group of Ethics (2002-2005) and of the Legal Council of the Bank of Greece (since 2006) and a founding member and first General Secretary (1984-1988) of the Union of Greek Constitutional Law Scholars, a member of the Board since 1979 and the President (1999-2002) of the Hellenic League of Human Rights.
In addition, Mr. Alivizatos’ articles have been published in the Athens daily newspapers To Vima, Ta Nea, and Kathimerini.
Alivizatos is married to Gianna Diakou-Alivizatou, who is also a lawyer, and together they have a daughter and a son.