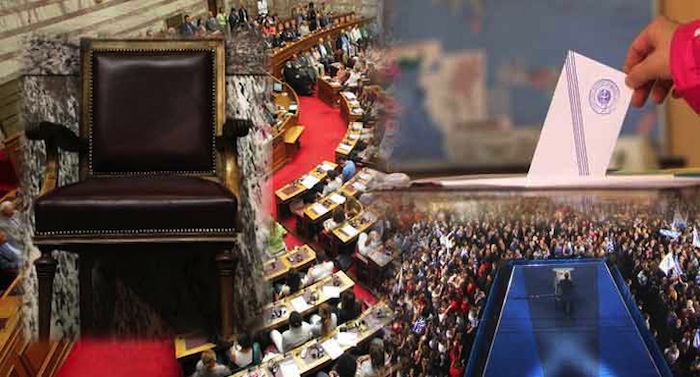 Greece will have to call general elections within a period of at least 21 days from today as the Greek Parliament failed to elect Stavros Dimas as President of the Republic of Greece. Greek constitution dictates that in an unsuccessful vote for President, in which only Greek MPs participate, the country has to call general elections.
The third and final round of voting concluded with a negative result on the election of a new President by the Greek Parliament a few minutes earlier. The only candidate nominated by coalition government partners New Democracy and PASOK, and Greek Prime Minister Antonis Samaras’ favorite, was Former Foreign Minister of the Papademos administration and Former EU Commissioner Stavros Dimas.
“Yes” to Dimas’ election voted a total of 168 MPs, while 132 blank votes opposed the election. In this third ballot, a total of 180 votes were required to elect a new President.
This result brings the country before snap general elections, according to the Greek Constitution, within a period of at least 21 days from today. The first unofficial information estimate the elections on Sunday, January 25, 2015. Tomorrow, the President of the Hellenic Republic, Karolos Papoulias, will order the current Greek Parliament’s disband.
The main opposition party leading the latest polls, SYRIZA, has not nominated any candidate for the Greek Presidency as it had been actively asking for general elections.