Amphipolis: The Eldorado of Ancient Greece 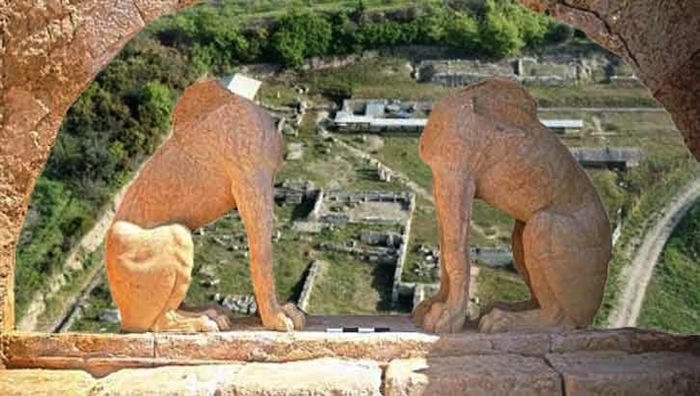 The tomb of Amphipolis has made an impression across the world for its large size. However, ancient Amphipolis was a powerful city with big, tall walls, which still exist today. When the town was under Macedonian control, it used to operate as the “mint” for King Philip II and Alexander the Great. In other words, Amphipolis was the Eldorado of ancient Greece.
The old ruins of Amphipolis are located 100km from Thessaloniki, on the road to Kavala, near Strymon river. It was an ancient city built in eastern Macedonia and was founded by the Athenians in 437 BC to control the resource-rich region. The town was finally abandoned during the 8th century AD.
The Greek island of Thassos, located southeast of Amphipolis, provided the city with 2,500 cubic meters of elaborate white marble to build a perfect circle made with incredible geometric accuracy, consisting of marble bases, spars, superstructure and finials, noted the excavation architect Michalis Lefantzis.
Pangaion mountain is located on the northeast of ancient Amphipolis and was the main economic source for the area because of its mines. Using the mountain’s gold, the Macedonians made more than 1,000 gold coins per day in order to finance their military activity.
For this reason, Philip II of Macedon, father of Alexander the Great, built the town of Ancient Philippi at the eastern foothills of Pangaion. The rise of the Macedonian dynasty was based entirely on the exploitation of gold mines on Pangaion mountain.
So due to its wealth, Amphipolis was one of the most important conquests of Athens. This explains the terror that prevailed in Athens during the Peloponnesian war, when news arrived, in 424 BC, that the Spartans, led by Vrasidas, had surrounded and besieged Amphipolis.
Historian and military general Thucydides was able to rescue his fleet at the mouth of Strymon river, but his failure to save Amphipolis led to him being ostracized for 20 years. In 421 BC the Athenians made another unsuccessful attempt to regain the city.