GRNews
GreekReporter.comGreek NewsCultureWhat Did India Learn from the Ancient Greeks?

The interaction of the two great ancient civilizations of Greece and India, which began with the invasion of Alexander the Great in 327 BC and lasted for more than two centuries, has been the subject of numerous books by Indian and western scholars over the years.

“The most famous Greek to come to India was of course Alexander the Great. He arrived at the head of an invading army in 326 BC—but he left as a friend,” Kovind wrote on Twitter.

The historical presence of Greeks in India and the way the two civilizations interacted has always been controversial, says Dr. Richard Stoneman, a scholar and the author of a recently published book on the subject in an interview with Greek Reporter.

“The British scholars who were the first to really look at the art of ancient India in the middle of the nineteenth century assumed that there was wholesale influence from the Greeks on India. Then there was a big reaction among Indian scholars, who said that actually India invented everything without any outside influence whatsoever,” he explains. 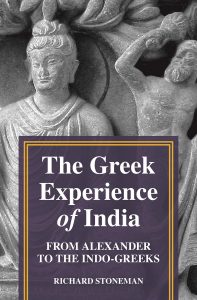 His new book, titled “The Greek Experience of India—Two Centuries of Greek Presence,” attempts to do just that. “I hope that my book provides a medium position which would help someone understand the two-way interaction between the Greeks and the Indians, those last centuries BC.”

His new work delves not only into Alexander’s invasion of the Indus Valley in 327 BC—the first large-scale encounter between Greek and Indian civilizations—but also into the era which followed, when Hellenic-style successor kingdoms ruled by strongmen rose and fell in northwest India and Bactria, its neighbor to the west.

The presence of these Hellenic states in that region of the world and their occasional forays even further east created a zone of Greco-Indian contact, influence, and exchange, as well as occasional conflict, stretching from Central Asia to the Ganges.

Stoneman argues that the two civilizations influenced each other in the arts and philosophy, but as he points out “in many ways the influence primarily went the other way, from India to the Greeks, although of course, there are many instances where Greek influences are very perceptible.”

“The chief ways are in painting and sculpture,” the researcher says. He relates that large-scale sculpture began to be created in the city of Mathura in the third century BC, and about two centuries later, another school of sculptural art, heavily influenced by Hellenistic models, developed in Gandhara in today’s northern Pakistan.

Art is “most important, evident” Ancient Greek influence on India

“I think you can see the same in the earlier art of Mathura,” says Stoneman, “which is particularly interesting because until the third century BC there is no large scale sculpture in India. All there was were small scale, mainly clay, figurines, and bronze workings the size of one’s hand.”

The British scholar notes that there are also small details, such as how the subjects’ drapery is depicted with the naturalistic folds, as well as the knots in their tied sashes, which also proves the extent of the influence of Hellenistic art in India.

But what is really interesting is the way these philosophical ideas interacted, he notes. The Greek philosopher, Pyrrho of Elis, who traveled with Alexander, was himself influenced by Indian philosophy. Soon after that, he says, we find a great deal of interaction of ideas and theories between the two cultures.

During the two centuries of the Indo-Greek era, the philosophical interaction between Greece and India was very productive for later civilizations, states the author, who points to its influence on the development of the philosophy of skepticism.

The author refers, as an example of this, to “The way that skepticism seems to be rooted in a Buddhist perceptive, which denies permanence to anything at all. We see very interesting echoes of that in the philosophy of Epicurus. We also know that later Greek philosophers were interested in Indian thought. This kind of mystical perspective on the universe is very much shared…”