Exarcheia’s reputation precedes it. If you ask any Athenian about the neighborhood, located near the University of Athens, you are bound to get a strong reaction.

Often referred to as the anarchist neighborhood of Athens, there is much more to Exarcheia than immediately meets the eye. Exarcheia is an area with much to offer for misfits of all kinds; migrants, students, artists, and intellectuals call this colorful neighborhood home.

The history of Exarcheia

Exarcheia has a reputation as a leftist and anarchist stronghold. The Polytechnio uprising of 1973, when students barricaded themselves inside the university to protest the military junta dictatorship, occurred in the area.

Over the years, Exarcheia has become home to all sorts of misfits in Athens. The area is home to many socialist, anti-fascist, and anarchist groups. It is also an area extremely popular with students, artists, and intellectuals of all kinds.

Exarcheia has also opened its arms to migrants displaced during the migrant crisis of the mid 2010s, providing housing for migrants of all kinds through squatting in abandoned buildings.

An event that deeply shaped and defined the area was the tragic police killing of 15-year-old Alexis Grigoropoulos in 2008. The shooting of Grigoropoulos was a call to arms for the entirety of the neighborhood and the rest of Athens in December of 2008.

Since then, the street where the teenager was killed has been unofficially renamed “Alexander Grigoropoulou Street” and the community regularly contributes to a shrine which honors the boy’s short life. 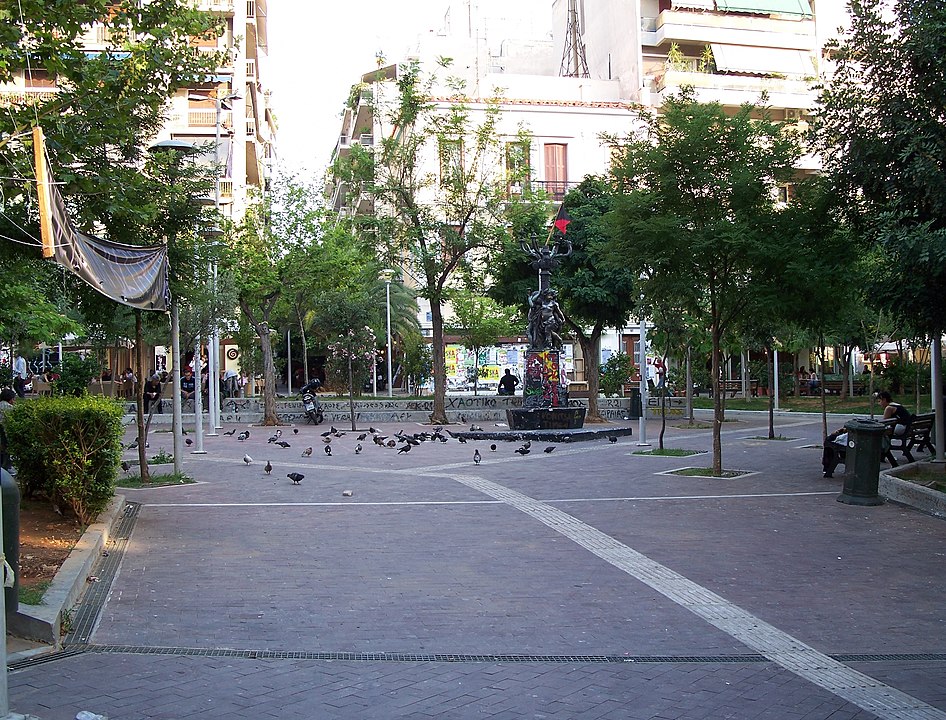 Things to do in Exarcheia

The main square of Exarcheia is surrounded by little side streets which are bustling with life.

For those who don’t mind a bit of adventure (and a little bit of an edgier vibe), Exarcheia is the perfect place to go for a casual drink, coffee, or even to take in some of Athens’ most historic architecture!

The Exarcheia apartment building depicted above is defined by a long history. Known as the “Blue Condominium” of Exarcheia, it is one of the oldest apartment buildings in Athens and an important example of architecture of the period.

It was built over a single year, in 1932, and completed in 1933 and still stands over Exarcheia Square on the corner of Arachovis and Themistokelous Streets.

Designed by architect Kyriakoulis Panagiotakos, it is widely regarded as a “must-see” architectural site in Athens.

Although originally painted a dark blue, the color has since greatly faded in the Greek sun. Because of its name, the “Blue Condominium” is easy to miss if you don’t know what you’re looking for!

One of the unique things Exarcheia has to offer are its stores.

Chock-full of music, art, and general creative specialist stores, the area is perfect for artists of all kinds. Stores in the area tend to be small, independent businesses, and are generally fascinating for window-shopping regardless of whether you make purchases!

Another common type of establishment in the area is vintage stores.

Although second-hand clothing can be found in many “outlet” style stores around Athens, Exarcheia is unique in housing multiple vintage stores with a curated collection. These stores are perfect for those interested in sustainable and budget-friendly fashion in Athens!

There is also a huge variety of bars and cafes in the area. Hence, there is certainly something for just about everyone!

Certain bars have a very traditional feel, falling into the category of a Greek “kafeneio.” These establishments typically serve coffee, beer, ouzo, and little else but are perfect gathering spots for friends or for playing card games.

Other bars in Exarcheia are more artsy, attracting a younger crowd. These bars typically have brightly colored furnishings and surroundings and are exceptional because part of the experience is simply taking in the unique ambience of Exarcheia.

Bars in Exarcheia are, as a rule, some of the most affordable in downtown Athens with some hidden gems serving cold, frothy glasses of draft beer for as little as €3 ($3.60)!

Another great feature of Exarcheia is its captivating atmosphere. Even if one does not desire to make purchases in the area, there are plenty of things of interest to just about anyone!

Firstly, Exarcheia is a great area for people watching. Since a lot of the residents and visitors of the area are part of a counterculture, many express themselves through their dress. Sitting in a quiet corner of the neighborhood and simply people watching can be quite stimulating!

Furthermore, the graffiti—also deemed as artwork by some—which adorns the area’s walls is extraordinary. As in the rest of Athens, it can range from the simple spray painting of one’s name to highly elaborate murals.

Much of the graffiti in Exarcheia is political and anti-authoritarian in nature, allowing curious observers to gain an understanding of local concerns. The graffiti certainly contributes to the feel of the city, bringing Exarcheia to life.

Those interested in additional activities free of charge, should not miss Strefi Hill, which sits at the edge of the Exarcheia neighborhood. Strefi Hill is a fairly easy climb and often attracts groups of young people who use the location as a hang-out spot. Strefi Hill is the perfect place for breathtaking views of Athens in all its glory!

Although Exarcheia isn’t for all tastes, it is undeniably one of the most unique and vibrant areas of central Athens, and it is well worth spending an afternoon exploring the area!