International Greek Language Day, which is celebrated on Wednesday (February 9) will have the wider support of the Greeks of Italy.

On the 9th of February each year Greece celebrates the universality of the Greek language. The date is also the commemoration of the death of Dionysios Solomos, the poet who wrote the country’s national anthem.

For more than two millennia the Greek language has been a means of communication between different peoples, greatly influencing modern languages and Western culture to extent matched by no other language.

The proposal for the celebration of an International Greek Language Day was made in 2014 by professor Jannis Korinthios, a Diaspora Greek in Italy who is the author of a dictionary of the Ancient Greek language.

The proposal was also supported by most municipalities in Greece, on the initiative of then president of the Central Union of Greek Municipalities (KEDE), Giorgos Patoulis.

The International Greek Language Day was established in 2017 after a joint ministerial decision of the Greek Government, with the unanimous approval of the Greek Parliament. 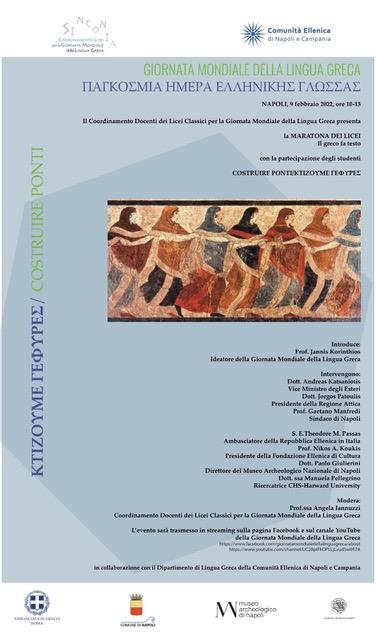 The Hellenic Community of Napoli and Campania headed by Korinthios and Angela Iannuzzi have organized this year’s celebration with the theme “Building Bridges,” based on a poem of Giannis Ritsos.

The online event is a collaboration of the Coordination of High School Teachers with the support of the Hellenic Community, the Municipality of Naples, the National Archaeological Museum of Naples and other contributors.

Jannis Korinthios and the Greek language

Jannis Korinthios, the man who is behind the establishment of International Greek Language Day, is certain that the Greek tongue will continue to be dominant in the sciences, even in the computer age.

When he spoke to Greek Reporter last April, the professor expressed his certainty that the Greek language is not under threat by the internet or the existence of multiple social media platforms.

Rather, he stated that “The Greek language is threatened by the indifference of those who must protect it: the schools, universities, homes, media, and our public services.

“The Greek language is ancient and yet alive… it is a valuable legacy and the cornerstone of the identity both of Hellenism and of European education.”

To support his argument, the professor repeated the words of George Seferis, a Nobel laureate who was one of the most important Greek poets of the 20th century:

The event will stream online on Wednesday on YouTube and on the Facebook page for the Giornata Mondiale Della Lingua Greca.