Greek Language Day: The Mother of All Western Languages 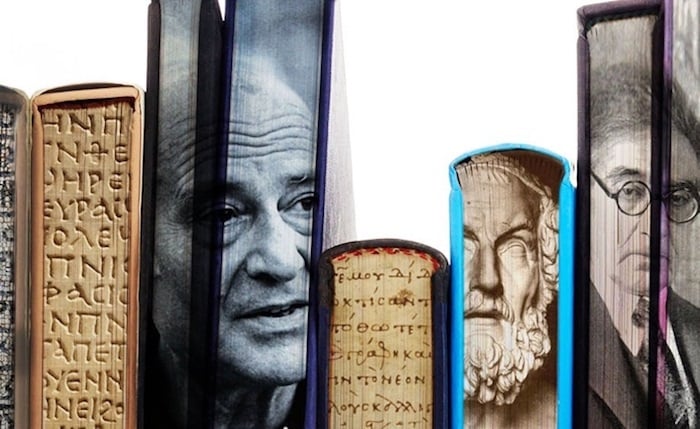 The Greek language now has its own World Day, which is celebrated annually every February 9, the day which also honors the memory of Greece’s national poet Dionysios Solomos, who wrote Greece’s national anthem ”Hymn to Liberty.”
This celebration seeks to highlight the Greek language’s fundamental role and defining contribution in the development and establishment of European and world literacy and culture.
Greek remains a language which greatly enriches international scientific discourse; more than any other, it is the language which developed, shaped and expressed the beginning of most scientific theories, philosophical thoughts, and literature in most of the modern-day languages of the Western world.
“It is a language that has been spoken for forty centuries without interruption. It has also been written in the same way, using the same alphabet, for 28 centuries, and it has held on to the same spelling rules for 24 centuries,” noted prominent Linguistics professor and former Education Minister Georgios Babiniotis.
While Greek remains a language which is native to a mere 13 million people worldwide, its influence and contributions to the entire world are unparalleled.
Native speakers of the Greek language often find themselves initially perplexed when they visit countries and peoples well beyond Europe, only to realize that the languages they hear there use words and phrases, as well as grammatical and syntax rules, which derive directly from the Greek language itself.
It is no surprise that the phrase ”The Greeks have a word for it,” is used by English speakers each time they encounter difficulty in describing an object or an idea.
Greek Language World Day
Officially starting in 2018, this day celebrating the unique achievements of the Greek language has sparked initiatives to help spread this great language and culture worldwide.
The initiative was originally taken in 2014 by communities of Greeks and Italians in Italy who were the very first to propose an international day for the Greek language. The Greek government eventually adopted the proposal in 2016 and a plenary session of the Greek parliament unanimously accepted it.
Among this year’s events will be a great celebration in an Italian city with Greek origins, Naples, or Napoli, in southern Italy.
There, more than one thousand high school students are expected to gather this February to celebrate the Greek language and culture with theatrical events, dance, music, concerts, and guided tours to the ancient Greek monuments of Italy. There will also be formal seminars and many other activities devoted to Greek culture.
Greek Reporter‘s Initiatives to Promote the Culture and Language of Greece


Throughout the years, Greek Reporter has tried to discover and present to the wider world all those unknown heroes who, often with little or no help at all, try not only to preserve but also to expand and promote the Greek language, history and culture — even to the most remote places on Earth.
Our report on The Archimedean Academy in Miami, Florida showed how a new high school in the heart of Florida uses Greek culture as its core value, which goes on to shape the entire curriculum of this educational institution.
Serving more than 1,140 multicultural, multilingual students, the Archimedean Schools have consistently ranked among the top-performing public and private schools, not only in the county and the state of Florida, but in the entire United States.
The mission of these uniquely Greek schools in America is “to initiate the young mind into the art of thinking” through the teaching of mathematics and the Greek language.


Similarly, on the other side of the Atlantic Ocean, in the heart of the African continent, a few Greek Orthodox priests have been steadfastly promoting the core elements not only of the Orthodox Christian faith but also Greece itself: its language, its history and the contribution of Greeks to humanity in general.
”We are Greeks because we got educated in Greece,” says Jonah (Lwanga), the Metropolitan of Kampala and All Uganda, the spiritual leader of the more than one hundred thousand Ugandans who are Greek Orthodox Christians.
The Orthodox Church has grown exponentially over the last century in this verdant sub-Saharan country.
Currently in Uganda, one can find approximately 80 Greek Orthodox priests, along with 105 Orthodox communities, schools and even a hospital.

However, Africa is not the only continent where the Greek language and culture are progressing in spreading their influence.
The ”Atenea Institute,” an educational institution in the Central American nation of Panama, is the only Greek school in all of Latin America. Within a few short years it has become the focal point for academic excellence in the entire country.
The Greek language there is taught from the primary school up to the high school level, to each and every student, whose varied backgrounds constitute the school’s fascinating multinational mosaic.
At Atenea, which was founded in 2002, pupils learn the Greek language, the ancient and modern history of the nation, and its philosophy and science.

Epilogue
The history of the Greek language is a tale which is synonymous with the seemingly contradictory notions of both modesty and glory.
Modern Greeks are often proud that their country never colonized other nations in the recent past — yet Greece was the very first Western civilization to colonize almost every other nation by its massive cultural influence throughout the centuries.
A native of England, France, Italy, or even a native of a language spoken far away from the Mediterranean Sea, has at some point used a word, a phrase or an idea which has its roots in the Greek language, or in the writings of a Greek philosopher or poet.
Today, almost four thousand years after the first Hellenic tribes began their turbulent yet always fascinating journey to prominence in the world, their cultural and linguistic heritage is still alive.
It is alive through our very selves, whether we are Greek nationals or not.
Because, ultimately, being Greek entails much more than just one’s nationality, written on the flimsy paper of a passport.
Happy International Greek Language Day!

It was on this day, February 26, one year ago that the first case of coronavirus was confirmed and officially announced in Greece.
Greek News

Greece confirmed 884 new coronavirus infections in the last 24 hours, with 7 of these identified at entry points to the country.
Greek News