TechNews
GreekReporter.com Greece The Greek OXI Was a Message of Freedom to the World

The Greek OXI Was a Message of Freedom to the World 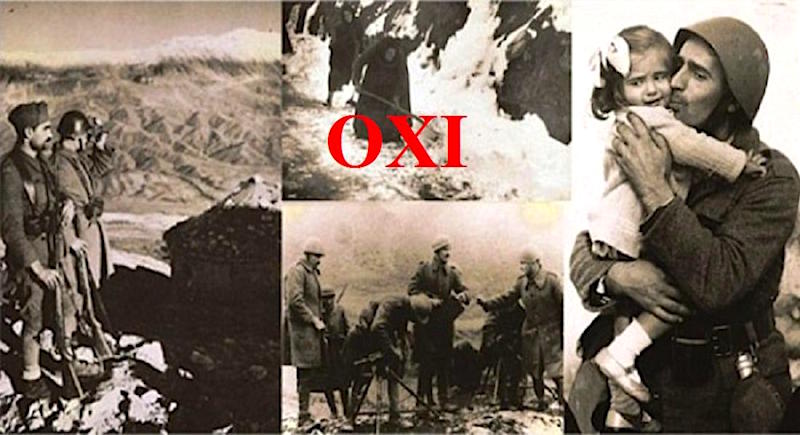 Throughout the history of Greece, the word “OXI” (“No”) was spoken to the enemy several times in several different ways. It was on the lips of Leonidas when he faced the mighty Persian army in Thermopylae many centuries ago. It was also the proud response of Themistocles when he sank the entire Persian Navy at Salamis.
For the most part these were times when the enemy was the mighty Goliath and Greece was David. That was certainly the case on October 28, 1940, when the armies of Adolf Hitler were fighting on maultiple fronts and he allowed his Italian ally Benito Mussolini to take over Greece. The Italian leader saw Greece as the neutral Lilliputian neighbor that would surrender in cowering fear of his mighty army.
But little did he know. Greek Prime Minister Ioannis Metaxas had been well prepared for the inevitable. He had fortified Greece’s borders in the North and knew that the Italians would have a hard time fighting in the natural border of the high mountains of Epirus.
Metaxas also knew that the Greek people were already enraged against their fascist neighbors after an Italian submarine had sunk the Greek Navy cruiser “Elli” in the port of Tinos island on one of the most sacred days for Greek Orthodoxy, the Dormition of the Virgin Mary, on August 15, 1940.
While life in neutral Greece was quite normal during the first year of World War II, the clouds of war were looming over the country, with war updates prominent in the newspaper headlines and radio reports. The sinking of the “Elli” was a stark reminder to Greeks that the war was approaching.
Greek people — who had fought for freedom and independence in the past, just 120 years previously — were mentally prepared to fight. They knew it was just a matter of time. More importantly, they were eager to go to battle for freedom and independence once again.
So when Italian ambassador Emanuele Grazzi knocked on Metaxas’ door at three o’clock in the morning — after a party at the Embassy — to deliver the ultimatum from Mussolini, the Greek Prime Minister was prepared.

The ultimatum demanded that Metaxas allow the Italian Army free passage to enter and occupy strategic sites in Greece, unopposed. The Greek Prime Minister delivered an unequivocal response in French, the diplomatic language of the day: “Alors, c’est la guerre.”  (“Then, it is war”), which was quickly transmuted into the laconic “OXI” by the citizens of Athens the next morning.
It should be noted that the confidence of the Italians that Greece would surrender immediately was so great that Grazzi had the unmitigated gall to visit the Greek Prime Minister at three in the morning after the party in the embassy.
Metaxas addressed the Greek people over the radio in the morning of October 28. His words are timeless:
“The moment has come that we will fight for the independence of Greece, its integrity and its honor.
Even though we kept the strictest neutrality and equal distance to all, Italy does not recognize that we should live as free Greeks, and asked us today at three in the morning to surrender part of our national territory of their choice; otherwise they would start military moves against us at six in the morning. I replied to the Italian ambassador that I consider the request and the manner in which the request was made as Italy’s declaration of war against Greece.
Greeks, now it is time for us to prove if indeed we are worthy of our ancestors and the freedom that our forefathers secured for us. Our nation as a whole will rise united as one body. Fight for our Homeland, our women, our children and our sacred traditions. Now we fight for everything.”
The Italian offensive began at 5:30 in the morning of October 28 in the mountains of Epirus, Pindos and Kalpaki, which form the natural border between Greece and Albania.

The bravery and dedication of the outnumbered Greek Army was such that within three weeks, Greece had pushed back the invading forces, much to the surprise of Mussolini and the Italian generals. Then the Greek Army began a counterattack, driving the Italians deep into Italian-held Albania.
Mussolini was humiliated and enraged. Hitler was also furious at the failure of the Italian troops, blaming Mussolini not only for his incapability to take over Greece, but also for his promise that he would deliver the country to him.
The popular Greek singer of the time Sofia Vembo ridiculed Mussolini with the song “Βάζει ο Ντούτσε τη στολή του῾᾽ (“Duce puts his uniform on”). In the lyrics, the Italian dictator appears as a buffoon who puts his ridiculous uniform on with the feathers on the cap and makes the grave mistake to try to take over Greece.
It was a song that, along with Vembo’s “Παιδιά της Ελλαδος῾᾽ (Βoys of Greece), boosted the morale of both the Greek troops and civilians alike. Vembo became known as “the singer of victory.”

After Italy’s humiliating defeat, the Nazis were forced to allocate substantial forces to take over Greece in April of 1941 and then remain there as an occupying force. These were the same troops and machinery that would have been valuable in his effort to invade Russia.
Many historians argue that the Greek victory on the Albanian front radically changed  Hitler’s plans for Russia. His offensive during the harsh winter in Russia — instead of the previous Spring —  led to his eventual defeat on the Eastern Front.
In more ways than one, the OXI of October 28, 1940 meant a great deal to the Greeks of the time and future generations. The Greek OXI — which was followed by stiff resistance to the occupying Nazi forces — was equally important to Europe and the United States in the fight against Hitler, proving that his armies were not invincible.
There have been critics of Greece’s celebrating the entry of a country to war and not the end of hostilities, as other nations usually do. After all, the end of a war is certainly a cause for celebration.
Yet the Greeks celebrate because they fought an uneven war in which they were eager to take part because they knew in their hearts that it was the right thing to do –d espite the insurmountable odds that were against them.

The U.S. is reaching the level of public debt recorded in Greece during the black days of the financial crisis that led to bailout programs.
Greece

The murder of a journalist in Greece is always a shocking event that shakes the foundations of a nation's core freedoms.