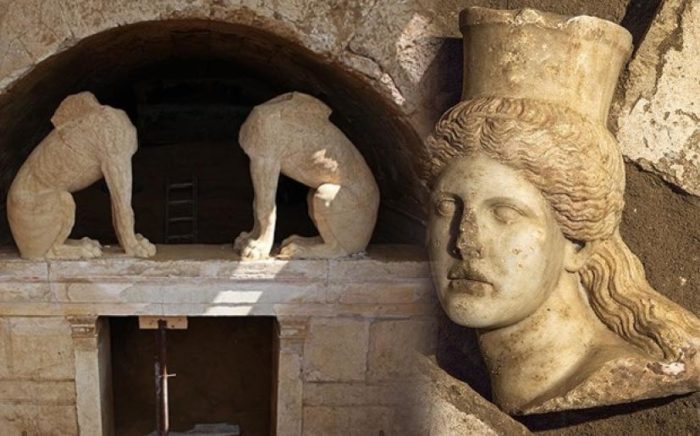 Greece’s Minister of Culture and Sports Lina Mendoni visited on Friday the monument of Casta in ancient Amphipolis, near the city of Serres in Central Macedonia, Greece.
After her visit, Mendoni described it as “a very rare monument of exceptional historical and archaeological significance, but also a tremendous developmental resource for the region.”
Mendoni was carrying out her first official visit to the site in her ministerial capacity, though she had been actively involved in the excavation as the ministry’s general secretary during the government of Antonis Samaras between 2012 and 2015.
She was briefed by ministry officials and officials at the Ephorate of Antiquities in Serres about the progress of the excavation work before her visit.
In statements, Mendoni thanked the Central Macedonia Regional Governor Apostolos Tzitzikostas for the region’s support.
“The aim is to meet the deadlines set by the Regional Operational Program of the Region of Central Macedonia, which is financing the project,” she said.
Mendoni noted that this would allow more resources to be requested from the region, which could then be supplemented with the funds from the Culture Ministry to produce a comprehensive, scientific study on how to showcase the monument.
Mendoni also announced that all studies concerning urgent restoration work that is due to begin immediately will be examined by the Central Archaeological Council of Greece on December 17.
The minister declined to give a clear timetable for when the monument will be open to the public but indicated that, provided all deadlines are met, it might be possible for special groups to visit it by the end of 2021.


Casta Tomb, also known as the Amphipolis Tomb, is a Macedonian tomb that was discovered inside the Casta hill near the ancient Greek city of Amphipolis in northern Greece in 2012.
Since then, scientific work and excavations are underway to carefully unearth the massive monument and showcase its valuable artifacts.