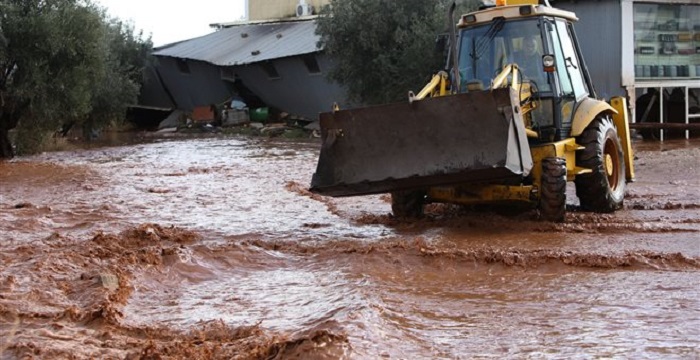 At least 15 people died, six are missing and 23 are injured following the disaster caused by extensive flooding in western Attica on Wednesday.
Firemen and other emergency services worked non-stop throughout the night to clear the water and the mud that covered streets, houses and businesses mainly in the towns of Mandra, Nea Peramos and Magoula.
The Attica prefecture, the administrative district for the towns, said it would seek assistance from the EU Solidarity Fund, set up to respond to natural disasters.
A state of emergency was declared in the region and PM Alexis Tsipras declared three-day national mourning.
Among the injured is an 85-year-old woman who remains in intensive care at Thriasio Hospital.
Six people are missing. Among them, a man who was hunting on a mountain near Mandra, a man in Nea Peramos and four truck drivers who were last spotted on the old Elefsina – Thiva highway.
Several areas remained without electricity and water all night.
The fire service received a total of more than 600 calls for water pumping from residences and businesses.
It rescued 86 people from the flooded homes and cars that were swept away from the water.
Many Greek housing settlements are built without taking into account town planning regulations.
A Greek prosecutor ordered an urgent investigation into the lethal flooding  to determine the causes of the disaster.
Meanwhile, the National Meteorological Services (EMY) have issued an emergency bulletin warning of more extreme weather conditions over the next days.
According to the report, heavy rainfall and storms will continue, while strong winds and hail storms are also forecast.