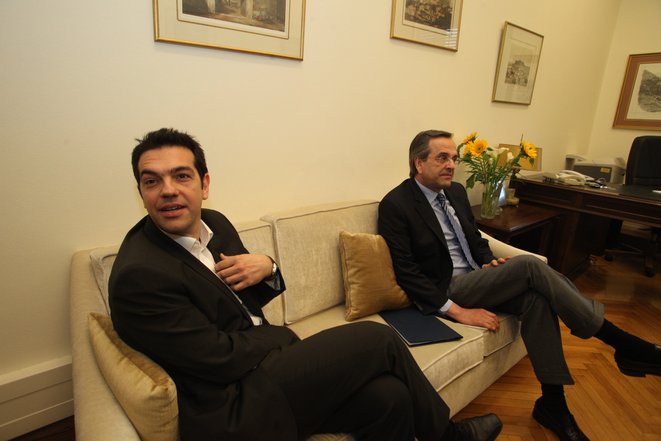 A steady lead of 3.1% ahead of ruling New Democracy holds the Greek main opposition party, SYRIZA, according to a latest poll on behalf of Greek newspaper “Eleftheros Typos.”

As shown by the survey, conducted immediately after the third unsuccessful ballot for the election of the new President of the Hellenic Republic, when snap general elections were announced, six parties will enter the parliament, with the Independent Greeks (ANEL) being located away from the target of 3% that grands parliamentary representation, while the Greek Communist Party (KKE) and newly-launched “To Potami” are both claiming the third position behind SYRIZA and New Democracy.

At the same time, the possible premiership of Tsipras is anticipated with fear by 41% of those questioned, compared to 38.1% who see it as promising.

It should be noted that the poll was undertaken before the announcement of Former Prime Minister Georges Papandreou’s new party (Democratic Socialists’ Movement) yesterday, although only 6.1% of those questioned said they would trust their vote to a possible new party launched by him.

Furthermore, 74.2% of Greeks answered “yes” or “probably yes” on whether Greece should stay in the Eurozone “at all costs.” This figure has increased significantly compared to the previous survey (May 2013) when it was moving at around 63.5%.