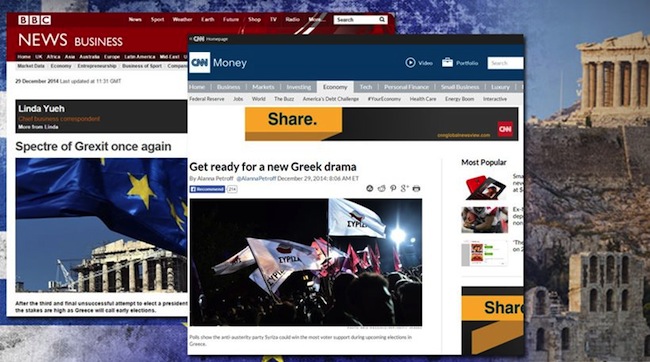 After the third successive unsuccessful ballot for the election of the new President of the Hellenic Republic, international media once again has their eyes on the Greek Parliament, with reports mainly focused on the uncertainty emerging from the early elections.

American TV network, CNN, in an article entitled “Get ready for a new Greek drama,” highlights that the country’s Parliament will be dissolved, as snap elections will be held within a month, risking a “nasty” fallout for its “fragile economy.” In addition CNN refers to the main opposition SYRIZA and its high chances of governing the country after the elections, saying it wants to renegotiate the terms of Greece’s 240 billion euro bailout package.

In the same manner, British BBC underlines that Greece’s economy has begun to recover after a long period of recession, although the Greeks have endured years of austerity and the left-wing opposition SYRIZA — which is currently leading the polls — wants the terms of a huge bailout renegotiated, even though some light is seen at the end of the tunnel with unemployment rates falling from a record 28% early this year to the still extremely high level, of 25.5%.

The New York Times in its article following the third presidential ballot and the failure to elect Stavros Dimas as the new Greek President, also refers to the possibility of SYRIZA emerging to power and the political uncertainty spread in Eurozone from the snap general elections. “The new political upheaval in Greece has not caused panic like that felt across the Eurozone in 2012, when it seemed possible that the country could be forced to abandon the euro, which shook the bloc that shares that currency. The prospect of elections has unsettled international markets and Greece’s creditors, however, because the leftist party SYRIZA, which has pledged to renegotiate the country’s international bailouts and to seek a write-down of Greece’s huge debt, is expected to win,” it estimates.

Furthermore, German Detsche Welle, also highlights that the snap elections in Greece are raising fears that its bailout could be “placed in jeopardy.” Referring to Berlin’s reaction after this development it is noted that spokesman of the German Chancellor Angela Merkel, Christiane Wirtz, has declined to comment on the matter, as it is a domestic one: “Of course we are looking very closely to what is happening in Greece. But you have to understand that I cannot comment on Greek domestic events, especially those which are only a half hour old. Fundamentally we are talking about a Greek domestic matter.”

Finally, international news agency Reuters also highlights that the country is facing snap elections that could damage its bailout program, adding that SYRIZA is — according to the polls — the clear favorite for the upcoming elections, even though its lead has narrowed lately.