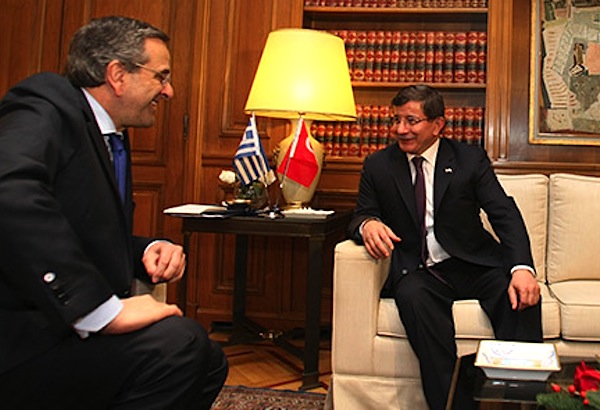 Turkish Prime Minister Ahmet Davutoglu arrived in Athens a few minutes after 3:30 pm accompanied by nine of his cabinet’s Ministers, in order to participate in the 3rd Greek-Turkish High Level Cooperation Council, to be held over two days in the Greek capital. According to his schedule, the Turkish PM will attend meetings with his Greek counterpart, Antonis Samaras, and the President of the Hellenic Republic, Karolos Papoulias, today. The two countries’ Foreign Ministers are also attending the two meetings.

According to the latest information emerging from the Greek Presidency of the Republic, Papoulias welcomed the 3rd Greek-Turkish High Level Cooperation Council, while also requested the Turkish side to respect international law. “We are neighbors and we will remain so, therefore we should be good neighbors,” Papoulias underlined. On his behalf, the Turkish Premier invited the Greek President to Cyprus, noting that “everything but the geographic location can change.” 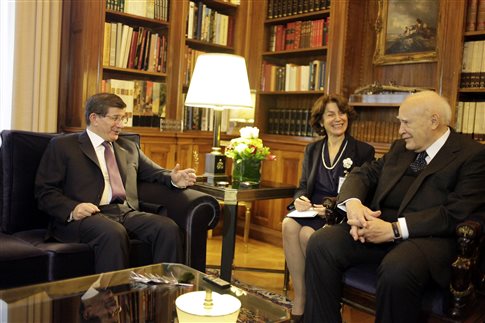 At 8:30 pm, both countries’ Premiers and Foreign Ministers addressed the Greek-Turkish Business Forum to be held at Hilton Hotel in downtown Athens, where some 200 Greek and Turkish businessmen will also participate. Reportedly, the interest of the Turkish businessmen is centered on the tourism sector. In 2014, over a million Turks visited Greece, with the prospect of a larger number of tourists in 2015, as the possibility to grand easier access to visas for Turkish citizens is under consideration. The commercial transactions between Greece and Turkey currently stand at 5.5 billion dollars. The biggest trade partner for Greek exports is Turkey with 4.2 billion dollars in 2013, with imports from Turkey stand at 1.3 billion dollars. At the same time, Greece remains a major investor in Turkey with 7 billion dollars, while the biggest investment is that of National Bank of Greece (NGB) in Turkish Finansbank.

The two countries’ Prime Ministers will chair the 3rd Greek-Turkish Cooperation Council on Saturday at 10:00 am at the Hilton. The Cyprus problem is also expected to be examined during the council’s two days, while the Turkish side is expected to table a proposal regarding the distribution of hydrocarbons found in Cyprus’ Exclusive Economic Zone (EEZ), something that Greece is expected to reject, as it firmly stands by Cyprus on the matter and has repeatedly requested the departure of the Turkish seismic vessel “Barbaros” from Block 3 of Cyprus’ EEZ.

Furthermore, the Turkish Prime Minister also awaits a development on the issue of the mosque construction in Athens, which is thought to be delayed, and in return, according to Greek reports, there could be a step towards the reopening of the historic Halki Seminary in Istanbul.

It should be noted that Athens has rejected Davutoglu’s request to visit Thrace, as such a visit would torpedo the attempt of establishing good relations between the two countries and would further escalate the tension caused by “Barbaros'” presence in Cyprus’ EEZ.

The Greek and the Turkish Prime Ministers are expected to proceed to joint statements on Saturday, after the completion the Greek-Turkish High Level Cooperation Council. Greek main opposition SYRIZA leader Alexis Tsipras is also expected to meet with the Turkish Prime Minister on Saturday. According to press leaks, the meeting will take place at Athens International Airport “Eleftherios Venizelos” at around 3:00 pm.

For the duration of the 3rd Greek-Turkish Cooperation Council, Greek Police have taken increased security measures, especially around Hilton Hotel, where the Turkish delegation is expected to reside, but also in the entire downtown Athens. The police have announced emergency traffic restrictions on Friday and Saturday. They warned that several major roads in downtown Athens will be closed at different times, depending on traffic, and urged motorists to seek out alternative routes, while various Athens Metro stations will also be shut down.