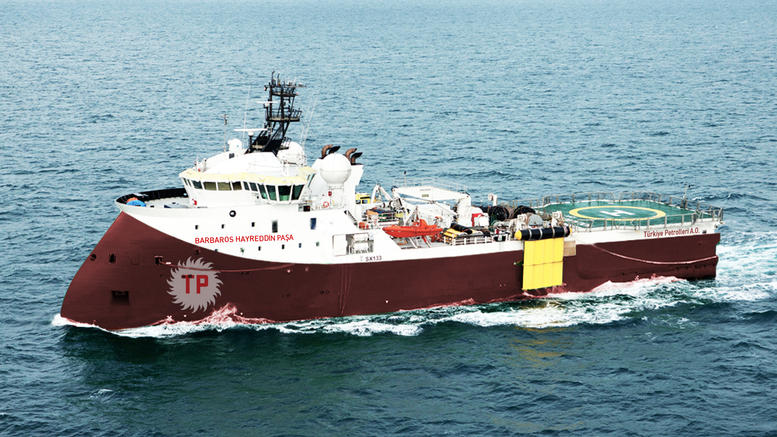 Cypriot National Defense Minister Christoforos Fokaides said that a seismic Turkish frigate, the “Barbaros,” and two additional vessels entered the Exclusive Economic Zone (EEZ) of Cyprus at 6.30 a.m. on Monday.
The Cypriot Government is closely monitoring developments, stated Fokaides, who condemned the entry in strong terms. The action, provocative and illegal, violates all international and European maritime laws and undermines security and stability in the greater region, he added.
Turkey recently issued a marine advisory for seismic surveys in international waters, including Cyprus’s Flight Information Region (FIR), as well as its EEZ. It did so without asking Cypriot authorities for permission. Ankara does not officially recognize the sovereignty of the Republic of Cyprus.
A ship belonging to the Turkish navy is also in the region observing the exploratory deep-sea drilling for Cypriot gas deposits by ENI-Kogas, an Italian-Korean energy consortium. The vessel sits five miles away from a rig that will drill 5,500 meters – in water 2,500 meters deep – over the coming weeks. Additional exploratory drilling is expected to take place over the next 19 months.
Furthermore, Russian navy exercises are taking place in the area this week, with Russian warships conducting drills east of Cyprus between October 20 and 23. The drills will take place inside the Nicosia FIR in a reserved area of over 800 square miles stretching from Cape Apostolos Andreas to the coast of Syria.
President Nicos Anastasiades said on Sunday the Turkish actions proved wrong all those who believed in Turkey’s assurances about a substantial contribution to the solution of the Cyprus problem.
Athens calls on Ankara to ‘reverse course’ over Cyprus EEZ
The Greek Foreign Ministry on Monday called on Turkey to “reverse course” after a Turkish seismic exploration vessel reportedly entered Cyprus’s Exclusive Economic Zone (EEZ) earlier in the day.
In a terse statement, Greece’s Foreign Ministry urged Ankara “to reverse course, not just with the vessel, but also in its foreign policy, and to manoeuver within the framework of international legality, to assist and support the negotiations in Cyprus, and to move within the framework of legality, which is the secure framework both for our bilateral relations and for Turkey’s European course.”