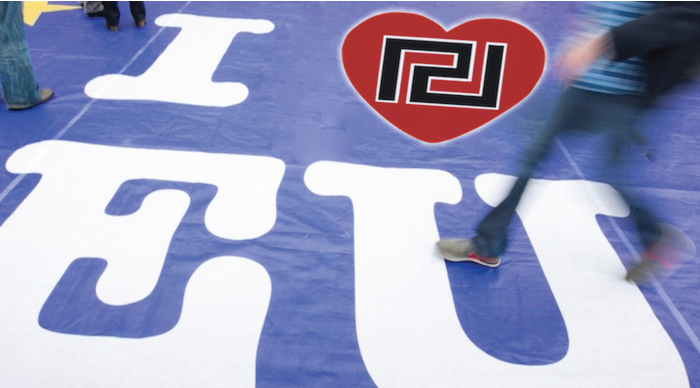 In what was called a “political earthquake,” far-right extremists parties – from Greece’s neo-Nazi Golden Dawn to the National Front in France and even up to Denmark – rose to take seats in the European Parliament elections.

Analysts said the surge was a sign of anger at mainstream political parties, a Brussels establishment out of touch with the populace of the 28-country European Union, fury over austerity and a feeling of being disenfranchised as politicians and the rich prospered.

Far right-wing parties saw their percentages to climb, with the ferociously euroskeptic UKIP shaking up the establishment in Britain, where only 36 percent of voters turned out, winning almost 27.5 percent of the votes cast and eleven extra seats in Brussels, mainly at the expense of the ruling coalition of Conservatives and Liberal Democrats.

The race was to see how many seats competing parties would get in Europe’s legislative body, which has relatively little power compared to the European Council, national leaders, or the European Commission.

There are 750 MEPs, and the European Parliament President gets a separate vote in an unwieldy grouping that tries to deal with legislation that is far-ranging and divisive. The conservative European People’s Party lost 63 seats but still has the biggest number with 211.

France’s far-right National Front party came first with 26 percent support— or 4.1 million votes – humiliating the socialists of floundering French President Francois Hollande, who has been busy trading girlfriends while his government crumbles around him. He said he would hold urgent talks with top government ministers in what French media called a crisis meeting

“The sovereign people have spoken … acclaiming they want to take back the reins of their destiny,” party leader Marine Le Pen said in a statement. She called the results “the first step in a long march to liberty.”

The National Front, like other far-right parties across Europe, promote anti-immigrant and often anti-Semitic policies.

French Prime Minister Manuel Valls, in an impassioned televised speech, called the National Front win “more than a news alert … it is a shock, an earthquake.”

All of Europe will have to deal with the fallout, analysts and politicians said. Pro-European parties “have to take very seriously what is behind the vote,” Martin Schulz of the socialist group in the European Parliament said, the Associated Press reported.

Guy Verhofstadt, leader of the liberal caucus in the European Parliament, admitted the results had shaken up politics but said it is two-thirds of the European lawmakers would be “people who are in favor of the European Union.”

In Denmark, with 95 percent of votes counted, the main government party, the Social Democrats, retained their five seats to remain the biggest party.

But the big winner in the elections was the populist, opposition Danish People’s Party, which won three more seats for a total of four.

In the Netherlands, however, the right-wing Euroskeptic Party for Freedom surprisingly dropped a seat from five to four. Its outspoken leader, Geert Wilders, said his party looked forward to working with Le Pen in Europe, calling the National Front leader “the next French President.”

“Golden Dawn is the third political power in Greece, it’s the only party that shows such a steep rise,” said Ilias Kasidiaris, the Golden Dawn spokesman, who, along with the rest of its hierarchy is facing charges of running a criminal gang.

The party denies it has neo-Nazi leanings, although Kasidiaris has a swastiko tatoo, Hitler’s Mein Kampf has been in its playbook, and prosecutors said they’ve uncovered evidence its leaders were following Nazi metholodogy in organizing the party.

Speaking next to the party flag – the ancient Greek meander which resembles the symbol of the Third Reich – he delivered a message from Nikos Michaloliakos, the party leader and a member of Greek Parliament who is in jail pending trial.

“I congratulate you for managing to resist the government’s terrorism and for not believing their lies,” the message read, according to British newspaper The Guardian.

“We are the only political power that actually stands up against our state being run by foreign powers. New Democracy paid the price for their policies against our people and their lies and SYRIZA has failed to express the public anger,” it said in reference to the ruling conservatives and the major opposition leftists who won the battle for Brussels.

“Golden Dawn is now the third pole in the political life of the country. Our slogan was the thieves should be in prison and the money they embezzled returned to the people but the thieves managed to put us in jail. They tried to dig a grave for us but they fell in it themselves,” the message added.