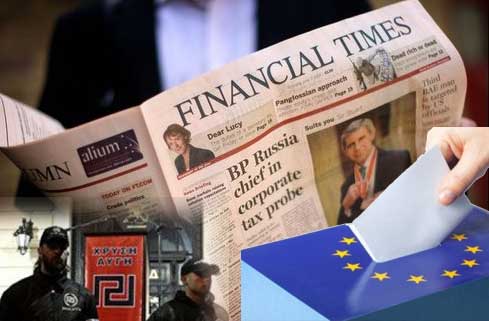 International analysts of the British newspaper “Financial Times” see a head-to-head battle between the conservative New Democracy and the ultranationalist Golden Dawn for securing the second place in the upcoming EU elections, following the sure victory of the leftists SYRIZA.
“Some analysts foresee now that Golden Dawn could get 15% to 20% in the May EU elections and threaten the second place of Prime Minister Antonis Samaras’ party,” reveals the FT article.
Ilias Kasidiaris: We aren’t neo-Nazis
The article makes extensive reference to the possibility of outlawing the neo-Nazi party because of illegal activities and goes into the creation of the new “National Dawn” party, while also hosting statements by Ilias Kasidiaris, Golden Dawn MP and candidate mayor for the city of Athens.
“The government wants to outlaw Golden Dawn, which would equal a destructive coup to the political system of Greece. National Dawn was created to represent the thousands of Greek patriots and to run in the elections if we get outlawed,” said Kasidiaris in the interview with FT.
“National Dawn’s list will include well-respected candidates, like retired armed forces generals, academics and doctors. They will receive strong support by the growing numbers of Greek nationalists,” he added.
“The government’s goal was to put me in jail before the elections, so that I wouldn’t be able to speak publicly,” said Kasidiaris, who took up the leadership of the party after the arrest of Nikos Michaloliakos a couple of months ago. He added, “I will continue to be a candidate, unless they pass a law depriving me of my civil rights.”
The Financial Times also discussed the popularity of Golden Dawn, which declined after Greek rapper Pavlos Fyssas was killed by a member of the party, but has since then risen again to about 10%, after the murder of two Golden Dawn members on November 1 last year triggered a wave of sympathy towards the party.
“We are not extremists, fascists or neo-Nazis as they support. They just want to prevent a popular nationalistic organization. Unfortunately, there are judges in Greece who adhere to specific party interests,” mentioned Ilias Kasidiaris.
New Poll shows battle between New Democracy and SYRIZA
Meanwhile, a new Greek poll published on Saturday indicated that the parties New Democracy and SYRIZA are very close to securing first place, with SYRIZA taking the lead in local and EU elections with just 0.3% and 0.8% respectively. The polled sample believes that SYRIZA would win the elections if they were to be held tomorrow, but thinks though that the most capable prime minister would be Antonis Samaras (with 45.4%).
According to the poll, the battle between SYRIZA and New Democracy for the top two spots in both elections is followed by Golden Dawn, KKE and ANEL. PASOK and DIMAR that ranks last in the poll.