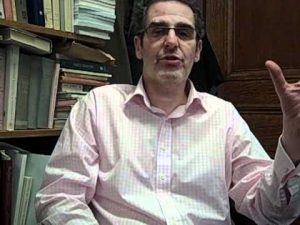 One of the premier writers of Greek history, Britain’s Mark Mazower, told an audience at the American College of Greece that the government is seriously underestimating the threat of the neo-Nazi Golden party becoming a mainstream political force.
Golden Dawn, which got just 0.29 percent of the vote in 2009, won 6.7 percent and 18 seats in Parliament in last year’s elections and has risen as high as 14 percent in some polls, and now ranks third among Greece’s political parties in voter support.
The party’s platform is vehemently anti-immigrant and its members have been accused of beating immigrants, and it also espouses anti-Semitic, jingoistic and ultra-religious ideas, including prosecution of people accused of blasphemy against God or the Greek Orthodox Church.
Speaking during a lecture on Greece’s political extremes, Mazower drew parallels between the Greek far right party and the Nationalist Socialist (Nazi) party of the 1930’s, the newspaper Kathimerini reported. “There is commonality of approach,” he said of the two parties stressing their emphasis on biological racism and violent street tactics that sets them apart from other European nationalist movements.
Golden Dawn officials vehemently deny any Nazi affiliation saying they are Greek nationalists and that they have nothing to do with Hitler or Mussolini although the have displayed Mein Kampf in their headquarters, use an ancient Greek Swastika-like meander as a symbol and give the Heil Hitler salute.
“Any right-wing party worth its salt is keen to stress its nationalist credentials,” said the 55-year-old Mazower, an expert on Greece and the Balkans who teaches history at Columbia University in New York. Among his acclaimed works is Inside Hiter’s Greece, a harrowing story of the brutal Nazi occupation so fiercely resisted by many Greeks, but whose ideas have now been latched onto by Golden Dawn.
Greece’s brutal financial crisis has catapulted Golden Dawn, for years at the fringes of domestic politics, into the spotlight. A recent opinion poll put the party’s support at 11.5 percent, compared to the 7 percent that it garnered in June’s election. This puts the party, which currently holds 18 seats in the 300-member House, in third place behind conservative coalition leader New Democracy and leftist opposition SYRIZA.
Reports of deadly attacks against immigrants by alleged supporters of Golden Dawn and its open endorsement of the country’s 1967-1974 oppressive military dictatorship have not dented its appeal among voters in a country where national self-understanding has to a significant degree been shaped by the fight against the Nazis and opposition to the junta, Kathimerini noted.
Mazower, who has written a number of books on 20th century Greek and European history, said Greece’s political class has failed to assume culpability or accept even a symbolic share of the burden that the population has had to shoulder as a result of the painful bailout agreements. Nevertheless, he said, Greeks must not turn their back on the democratic legacy of the post-1974 era.
“People need to defend the achievement of the metapolitefsi,” he said of what is widely regarded as the longest period of democratic stability in the country’s modern history. However, he said, they should try to remedy the system’s failings starting with “the credibility of the political class.”
Mazower was critical of the Greek left that he said “never made a mental break from the image of revolution,” but didn’t equate  far right violence with that of the far left and anarchists, who have taken to planting bombs and robbing banks.  “Some say all forms of lawlessness are equally dangerous. I disagree,” said Mazower. He said leftists movements haven’t threatened Greek democracy in the way Golden Dawn has.
He said historical attempts to underline the “fundamental kinship” between fascism and communism – bringing them both under the label of “totalitatarianism” – are flawed. “The totalitarianism thesis has been abandoned for very good reason,” he said criticizing recent attempts by conservative politicians in Greece to revive the debate in a bid to score political points against SYRIZA. He didn’t fault SYRIZA despite its implicit support of violence.
Instead of going after anarchist-run squats in Athens he said are of little political importance, he said the ruling New Democracy Conservatives of Prime Minister Antonis Samaras should go after Golden Dawn, Mazower said referring to recent police raids on several abandoned buildings in Athens. “Unfortunately the Greek state does not seem to realize the urgency of the situation,” he said. Samaras has not denounced Golden Dawn’s actions and has taken to copying their anti-immigrant stance in what critics said was a transparent attempt to gain their voters.