TechNews
GreekReporter.com Sports Meet All the Athletes Representing Greece at the Tokyo Olympics

It is no surprise that Greece, the originator of the ancient Olympic Games, will have a strong presence at the upcoming Olympics in Tokyo.

In total, the country is sending over 80 athletes to Japan to compete on the highest level of athletics.

Stefanos Tsitsipas and Maria Sakkari have been officially chosen by the International Tennis Federation (ITF) to compete for Greece in the Tokyo Olympic Games, starting today, July 23.

The decision means that the two Greek champions, after a tremendous showing at Paris’ Roland Garros, could earn medals for Greece at the top sporting event in the world.

The two players will not only play in their respective singles categories, but they will also pair together for the mixed doubles tournament.

Dentist and professional table tennis player Panagiotis Gionis will represent Greece in the sport in Tokyo. Gionis has been playing table tennis professionally since 2001, and he has competed in four Olympic Games.

Korakaki, along with gymnast Eleftherios Petrounias, will be the flag bearers for Greece during the Opening Ceremony of the Olympic Games in Tokyo.

Greek sport shooter Nikolaos Mavrommatis will represent Greece in Tokyo in the skeet shooting event. Mavrommatis ranked 9th in the same event in the 2012 Olympic Games held in London.

Evangelia Psarra, 47, who was born in Thessaloniki, has competed for Greece six times at the Summer Olympics in Archery.

The veteran Olympian qualified for the Summer 2021 games in Tokyo during the pre-Olympic archery tournament that was held in Paris in late June.

Greece’s artistic swimming team qualified for the Tokyo Olympic Games after a breathtaking performance in in Barcelona, Spain in mid-June.

After a thrilling competition, a nail-biter till the very last competitor, Italy, Spain, and Greece earned their ticket to this year’s Olympic Games in Tokyo.

Greece, in third place after the Technical Team event, used their Free routine to pay homage to Greek Mythology, portraying the Wings of Icarus.

Greece received 88.6000 points for their performance and ranking second overall with 175.9990 points.

Athletes representing Greece at the Olympics in track and field

A total of 19 Greek athletes will be participating in the track and field event at the Olympic Games in Tokyo, which is called “Athletics.”

Katerina Stefanidi, Nikoleta Kyriakopoulou, and Helen Claudia Polak will participate in the women’s pole vault event, while Konstantinos Filippidis and Emmanouil Karalis will represent the country in the same event for male athletes.

Katerina Stefanidi, a 31-year old Athens native, is widely regarded as one of the top female Greek athletes of our time. She won Gold at the 2016 Olympics in Brazil with an outstanding jump of 4.85 meters.

Nikoleta Kyriakopoulou is another Greek pole vault powerhouse. The 35-year-old athlete won a bronze medal at the Beijing World Championships in 2015, but was unable to compete in the 2016 Olympics due to injury.

Young athlete Helen Claudia Polak will be making her Olympic debut in Tokyo. She is of Sri-Lankan and Polish descent and has earned success at competitions both in Greece and throughout Europe.

Konstantinos Filippidis has represented Greece internationally throughout his career, and took sixth place at the 2012 Olympic Games in London.

The upcoming Olympic Games will be the first for Emmanouil Karalis, a 21-year-old pole vault superstar for the Greek team. Son of a Greek father and Ugandan mother, Karalis has consistently ranked highly in youth competitions across Europe.

Paraskevi “Voula” Papachristou will join the Greek National Team at the 2021 Olympic Games in Tokyo at the triple jump event. She has represented Greece internationally with great success.

Alexandros Papamichail will compete in the 50 km race walking event for men.

Antigoni Drisbioti is a 37-year-old athlete from Karditsa, Greece. She represented the country at the 2016 Olympic Games and placed 15th.

Athlete Kyriaki Filtisakou, 20, will be making her first appearance at the Olympic Games in Tokyo in the race walking event.

Alexandros Papamichail has set multiple multiple national records for the 50 km race walk. He was born in Karditsa, and has represented Greece is many competitions across Europe and the world.

Rhodes-native Rafaela Spanoudaki-Hatziriga, 27, will travel to Tokyo to compete in both the 100 m and 200 m sprint events.

Elisavet Pesiridou, born in Katerini, will participate in the 100 meter hurdles event for Greece at the Olympic Games. She is widely considered to be one of the best female Greek hurdlers of all time.

Three-time Olympic athlete Konstantinos Douvalidis-Ricks will travel to Japan to compete in the 110 m hurdling event. Douvalidis-Ricks has taken part in many European and international competitions.

Greek sprinter Irini Vasiliou, who hails from Heraklion, Crete, will join the Greek National Team in the 400 m sprint event at the Olympics.

In terms of the discus throw event, Chrysoula Anagnostopoulou will represent Greece at the Olympics.

Chrysoula Anagnostopoulou is a discus thrower from the Greek city of Larisa. This will be her second time competing at the Olympic Games.

This will be the second Olympic run for Greek athlete Michail Anastasakis, 26, who participated in the Games in Rio in 2016.

Hammer thrower Christos Frantzeskakis, aged just 21, will compete at the Olympic Games for the first time in his athletic career in Tokyo.

Track and field athlete Miltos Tentoglou will participate in the long jump event for Greece at the Tokyo Olympics. In 2018, Tentoglou won gold at the European Championships.

Chania-born cyclist Polychronos Tzortzakis will compete in the road cycling race in the Tokyo Olympics. He currently works as a professional cyclist for the Kuwait Pro Cycling Team, but will represent his native Greece at the Games.

Christos Volikakis, a 33-year old cyclist from the Greek city of Volos, will race in the track cycling event. Volikakis is one of the most successful Greek track cyclists of recent memory.

Mountain biker Perikilis Ilias, an Athens native, will represent Greece in the mountain biking event in Tokyo. He competed in the cross country event at the 2012 Olympics.

Greek sabre fencer Theodora Goudoura, 24, will be competing in her first Olympic Games in Tokyo. In 2019, she won a bronze medal at the World Fencing Championships.

Alexios Ntanatsidis and Elisavet Teltsidou will represent Greece in Judo, a modern Japanese martial art, at the Olympics.

Judoka Alexios Ntanatsidis, who won gold at the U21 World Championships in 2013, will compete for Greece at the upcoming Olympic Games.

Elisavet Teltsidou, winner of the gold medal at the Judo Grand Prix Antalya in 2019, is headed to the Olympic Games in Tokyo.

Fani Tzeli, 19, will compete in the Taekwondo event for Greece at the Olympics. She took bronze at the 2018 Summer Youth Olympics for the sport.

Eleftherios Petrounias, the Greek “Lord of the Rings,” qualified for the Tokyo Olympic Games in late June after a majestic performance in winning the World Cup in Doha.

Petrounias was untouchable on the rings from 2015-2018, winning titles at one Olympic Games, three World Championships, four European Championships and one European Games. But then his body gave up in the worst place for a rings specialist.

His left shoulder could no longer take the weight, and he went under the knife to fix his supraspinatus muscle.

Petrounias proved that he was fully recovered from that reconstruction and he is now fully focused on defending his title in Tokyo this year.

Marathon swimmer Alkis Kynigakis will make his Olympic debut in the 10km swimming event at the Games this summer.

Greek swimmer Apostolos Christou will represent his country at the Olympic Games at the 100 m backstroke event. The 24-year-old swimmer also competed for Greece at the 2016 Olympics in Rio.

Kristian Gkolomeev is a Greek-Bulgarian swimmer who specializes in freestyle. He will compete in the 50 m freestyle, 4×100 freestyle, and 4×100 events at his second foray at the Olympic Games in Tokyo.

Young Greek swimmer Andreas Vazaios will compete in the 200 m mixed singles event. Vazaios was an accomplished student athlete at North Carolina State University, where he won the NCAA Championship Twice in the 200 Yard Butterfly.

Odysseas Meladinis will take part in the 4×100 freestyle in Tokyo, in what will be his second time at the Olympic Games representing Greece. Meladinis also competed in the 2016 Games in Rio.

Both Konstantinos Englezakis and Dimitrios Markos will compete in the 800 m freestyle for Greece. Englezakis, 20, and Markos, 20, will be participating in their first Olympic Games.

Anna Ntountounaki is a 25-year-old swimmer from Chania, Crete. Ntountounaki will take part in the 100 m butterfly competition, in which she also took part in the 2016 Olympics, as well as the 4×100 mixed.

Konstantinos Meretsolias, Theodora Drakou, and Evangelos Makrigiannis will all represent Greece in the 4×100 mixed category.

Swimmer Evangelos Makrigiannis will be making his first appearance at the Olympics.

Maria Kyridou and Christina Bourmpou will compete together for the Greek sailing team at the Women’s pair event.

Kyridou and Bourmpou, both just 20 years old, competed together in the 2018 Summer Youth Olympics, winning gold.

Rowers Stefanos Douskos, who competed at the Olympic Games in Rio, and Anneta Kyridou, who has participated in international and European competitions, will take part in the single scull rowing event.

Emilia Tsoulfa, 47, and Ariadni Spanaki, 20, will compete together in the 470 sailing event.

Greek sailing champion Emilia Tsoulfa qualified for the Tokyo Olympics with her partner Ariadni Spanaki seventeen years after winning gold at the Athens Olympics in 2004 with Sofia Bekatorou.

Panagiotis Mantis and Pavlos Kagialis will compete in the 470 men’s sailing event, after qualifying for the Olympics for Greece by placing 6th in the World Championship in Portugal. The pair also won bronze at the 2016 Olympic Games in Rio.

Katerina Divari, 20, and Byron Kokkalanis, 35, will compete in the RS:X windsurfing event in Tokyo.

Byron Kokkalanis has participated in two Olympic Games in the past, in London and Rio, and will soon travel to Tokyo for his third.

This will be windsurfer Katerina Divari’s first shot at the Olympics.

Sailor Vasileia Karachaliou, 24, is an accomplished athlete. Among many awards, she has won a gold at the 2017 Sailing World Cup Series Round 1 in Miami and a bronze medal at the 2017 Laser & Laser Radial European Championships in Barcelona.

Ioannis Mitakis will represent Greece at the upcoming Olympic Games in the men’s Finn event. Mitakis has participated in both the 2012 and 2016 Olympic Games. 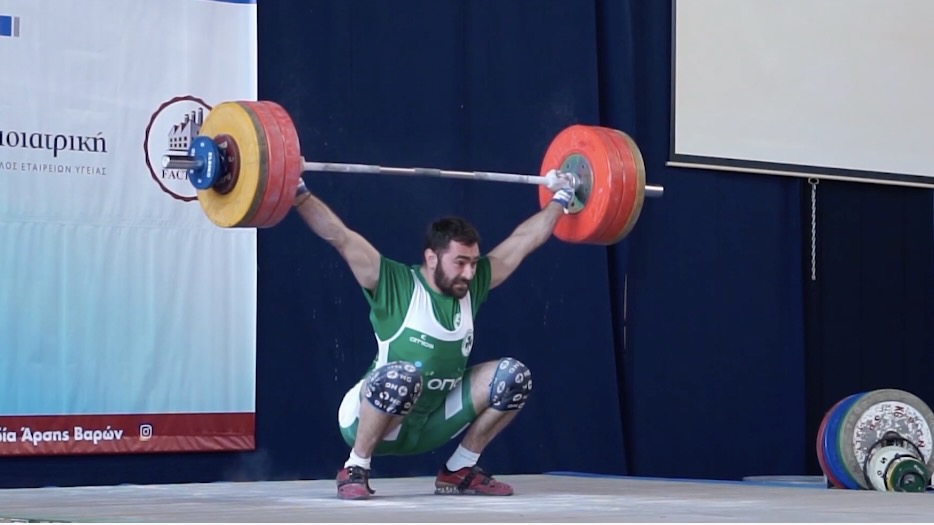 Greek athlete Theodoros Iakovidis will compete in the weightlifting event for his country at the Olympics in Japan. He came first at the 2018 Mediterranean Games and participated in the 2016 Olympic Games in Rio.

Both Maria Prevolaraki and George Pilidis will represent Greece in the wrestling event.

Maria Prevolaraki, 29, has represented Greece at the last two Summer Olympic Games. The impressive athlete came in first place in the Individual Wrestling World Cup held in Belgrade, Serbia in 2020.

Wrestler George Pilidis won silver at the U23 European Championships in Serbia in 2019.

Greece’s National Water Polo team will be competing in the Olympic Games for the 17th time when the team travels to Tokyo.

Greece has a strong international presence in water polo. it’s best score at the Olympics was in Athens in 2004, when the team came fourth.