Dozens of young content creators and influencers in Greece, who are connected by the common vision of giving back to society, have joined forces in the social media to change the world.

With more than 100 active members and 1,000 volunteers, PSDM Athens has become a grass roots movement that includes youngsters from every professional and artistic background all aiming to help when need arises.

By using their expertise on social media platforms, such as Facebook, TikTok, and YouTube, young Greeks between the ages of 17 – 25 organize to offer much-needed assistance to thousands of people.

Vangelis Nakis was the founder and is the driving force of the influencers movement. He began producing short videos on problems affecting youth, on issues such as bullying at school, homophobia and racism.

He tells Greek Reporter that the response of the Greek youth has been phenomenal and this gave him the idea to create the group whose initials stand for “Piso Sta Dika Mas” (PSDM), liberally translated, “Let’s talk about our problems.”

“Youngsters from all over Athens and other parts of Greece joined the group. At the moment we have 113 members and 1,000 volunteers,” Nakis says.

A turning point for the growth of the influencer movement in Greece came with the deadly floods that hit the island of Evia in August of 2020. Instagrammers, youtubers, and tiktokers joined forces to mobilize the young and help the victims of the flood by offering their services. 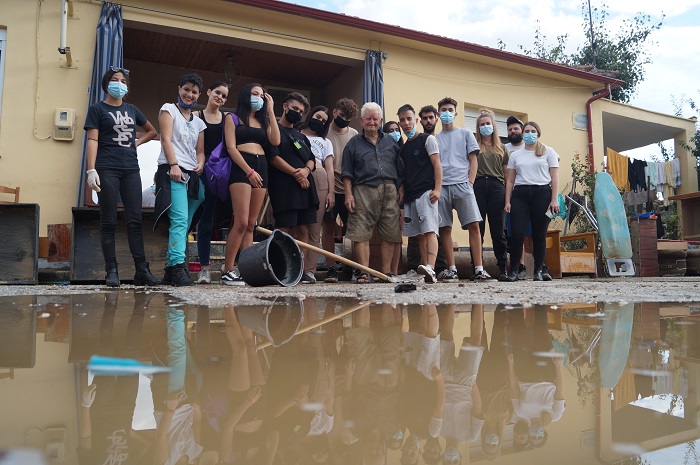 As Nakis says, great numbers of young people shared videos that showed the true devastation in Evia. The group descended to the worst-hit areas and not only helped local citizens with the clean-up operation but also gathered food and other items that were needed.

“We also offered our services a bit later after the catastrophic floods in Karditsa, central Greece. Forty influencers gathered on site to offer their services to the community — we cleaned more than 14 flooded homes that belonged to elderly people — and we also alerted the rest of Greece, through social media, of the situation on the ground,” Nakis adds.

PSDM Athens has expanded its volunteer services on many other social issues such as alerting the public on missing youngsters, blood donations for kids in need, food donations and cooking services for asylum seekers or impoverished youth.

In a world that is constantly seeking our attention and interest — for all the wrong reasons — this group focuses on the issues that really matter. The matters concern us all, but many times we ignore them. However, the people of this group try through their actions to remind us of a basic principle: Let us never forget our human nature.

Seventeen-year-old Alexandros Pavlopoulos is an expert on TikTok. He says that PSDM Athens was a pioneer in such work in Greek social media. “Since I was was much younger I wish I had people who could mobilize me in such a way,” he tells Greek Reporter.

Pavlopoulos is a photographer uploading images on TikTok that influence youngsters to take action. He has alert the public about a range of issues through his many social media followers. “Young Greeks have been mobilized through our platform. I was really surprised on how many joined our effort. This gives us hope that our generation can do great things,” he relates.

The major weapon of PSDM Athens take the form of short films that highlight social issues; most are based on real-life stories.

The first film was about the highway code. The influencers used Greek social media to alert the youngsters of the dangers of drinking and driving. The second film, which also received an award from the Ministry of Education, was about bullying at school.

The third was on discrimination against students with mobility problems. The next short film was devoted to the deadly fires of Attica in the summer of 2018, with the participation of young people from Mati, the worst-hit town. The fifth film was about cancer in young people.

“We believe that through our short films we can better mobilize and give advice to youngsters who do not watch television. They follow social media, and therefore through this medium we can have the greatest impact,” Nakis tells Greek Reporter.

He says that unlike many Greek youngsters who spend their time on social media for self-promotion or trolling, PSDM Athens “wants to inform and tell a story to young people that cannot be properly transmitted from parents or teachers.”

The group of Greek influencers is preparing its latest project on the scourge of human trafficking. A short video on the photoshoot was prepared by Director Konstantinos Mousoulis, where the members and volunteers of PSDM Athens speak about their mission and their hopes.

Member Ioannou Spanou calls on youngsters of her age to get informed and organize themselves. “We live in the same society. These things (human trafficking) are happening next to us. We don’t pay attention, but this has to stop. We should love and help our fellow human beings.”

“Social media should be used in order to influence people, to pass on a message. Using it to just showcase yourself is meaningless,” says Pavlos Agapios.

Nakis says that the next task for the Greek influencers is to open up their efforts beyond Greece. “We are looking for youngsters in the US, Europe, Australia and everywhere else that share our passion for giving to society. We can do great things together highlighting common problems and possible solutions for the young generation.”

Nakis’ passion to offer his help to society and help others in need stemmed from his admiration for his grandmother, he tells Greek Reporter.

“Her death recently reminded me of the importance of giving. She would choose to stay hungry if she was to help a starving person. She spent her life giving to people and society.”