GRNews
GreekReporter.comGreek NewsEnvironmentFloods in Evia, Greece Leave 7 Dead - a Baby Among Them...

Floods in Evia, Greece Leave 7 Dead – a Baby Among Them – and One Missing

By Philip Chrysopoulos
August 9, 2020
Facebook
Twitter
WhatsApp
Linkedin
Email
The storm system Thalia that hit Greece affected Evia the hardest of any region in the country – leaving 7 people dead – including an infant  – and one missing on Sunday, as of the time of this report. Many areas of the island suffered very serious damage from the flood.
According to Giorgios Psathas, the Mayor of Dirfia Messapia, who spoke to SKAI television, one 8-month-old infant, an 85-year-old man and an 86-year-old woman — all from the same family — lost their lives in the flooding that hit the area.
According to reports from local media, the family was vacationing in the village of Politika, staying in a ground-floor apartment. The family was trapped by the storm when the apartment flooded. As a result, the two elderly people and the baby drowned inside the dwelling.
Central Greece Governor Fanis Spanos spoke on Ant-1 Television on Sunday evening saying that rescue operations continue, as at least five people remain trapped.

Greece’s mational broadcaster ERT reported on Sunday that a 38-year-old man was found dead in the village of Bourtzi.
The news website Eviathema reported that the flood turned the streets into rivers, causing huge amounts of damage to property and vehicles. Houses and cars were flooded with mud, while in many cases people were forced to climb up onto their roofs to avoid the torrents of water.
Throughout the island, the fire service received hundreds of calls from terrified citizens who were trapped in their homes, after they had climbed atop roofs to save their lives.

A police vehicle overturned in an attempt to transport people from Politika to Psachna, while the torrents did not allow other vehicles even to approach in order to assist. A crane was later used to release the vehicle and then transport the people to a safe place.

In several places the water height reached 1.5 meters (5 feet) making the situation extremely dangerous.
At the same time, a vehicle was found trapped in the Agios Panoramatos area, where the situation is similar. A fire service vehicle rushed in and was able too move the car to a safe place. 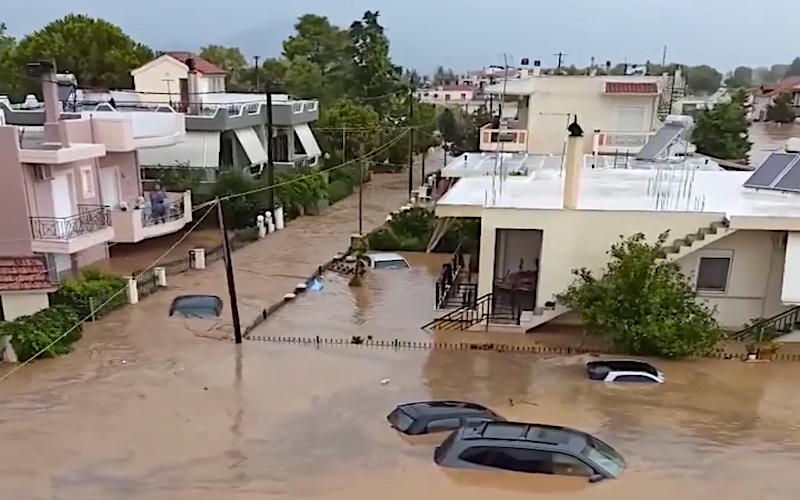