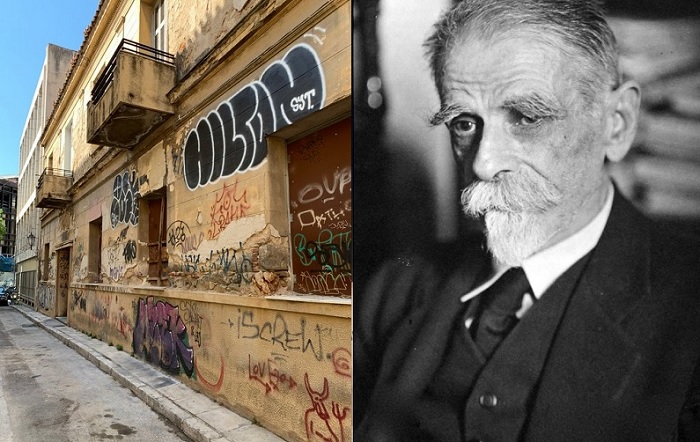 After many years of neglect and dilapidation, the historic home of poet Kostis Palamas in Athens is given a lifeline by the Greek Ministry of Culture.
According to a decision on Tuesday, the poet’s historic home, located in Plaka, will be taken over in order to conduct much needed restoration. The building is in a tragic state, covered with graffiti and nearly in ruins.


The Greek Ministry of Culture will undertake the restoration of home, a stunning example of Greek Neoclassical architecture from the interwar period.
Palamas lived there during the later portion of his life until his death, and he wrote some of his most important poems in the historic home.
Above the door is a plaque that states: “In this house, our national poet Kostis Palamas died on February 27, 1943.” On the day of his funeral, 100,000 Athenians frustrated with the German occupation and yearning for freedom gathered in front of his home, inspired to resist the occupation by his poetry.

Palamas is considered Greece’s national poet and a herald of Hellenism. He is widely recognized for his lyrical skills, yet is also known as a literary critic and philosopher.
Born in Patras on January 13, 1859, Palamas moved to Athens after finishing high school to attend the Law School at Athens University. His love for literature and poetry caused him to quit his studies, though, and pursue a career in journalism. He founded the “New Athenian School” of poetry, and published many iconic works of poetry.
Noting his contributions to Greek literature and poetry, many awarded Palamas with positions of distinction and honorary titles. In 1879 he was appointed secretary of the University of Athens.
He was also recognized by the international community, receiving awards and international titles from the governments of Spain, France, Germany, and Italy. There was also a statue of him erected in Messolonghi during his lifetime.
Palamas’ contribution to Greek and international poetry is massive, and his historic home is worthy of restoration. The Greek Ministry of Culture announced that the house will serve as a site for the study of Modern Greek Literature.