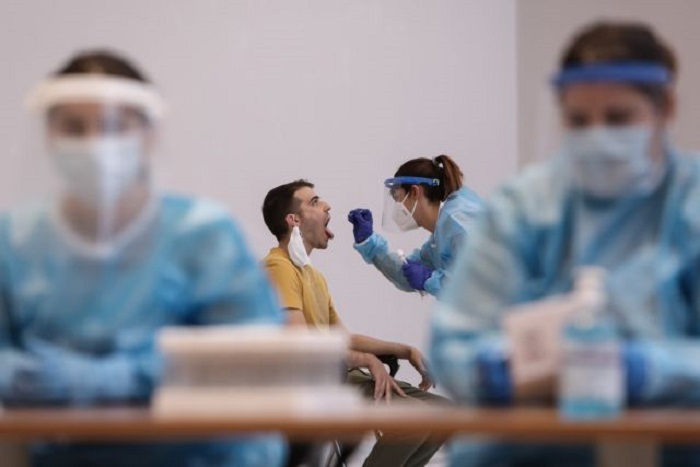 Greek health authorities are on high alert after a total of 103 Covid-19 cases have now been recorded since the country opened to mass tourism on July 1.
On Tuesday, 14 cases were recorded among tourists tested upon arrival. On Wednesday, additional new cases have been spotted among tourists in the islands of Thassos and Evia.
There are fears that many more infected individuals have slipped into Greece, mainly across its northern border, potentially spreading the disease to locals and tourists alike.
The four cases on the island of Thassos have been located and have been isolated in a quarantine hotel. The incidents were detected after the result of their blood tests, which were administered upon their entrance into the country, became available. The individuals were all Bulgarian and Serbian nationals — all of whom were asymptomatic.
Meanwhile, a 50-year-old Serbian tourist who traveled on Saturday with a large group to Edipsos on the island of Evia developed symptoms, and after being diagnosed as a Covid carrier at the local hospital, took a taxi to the Lamia Covid-referral hospital, where he is currently receiving treatment.
His wife was also diagnosed as positive, although she is reported to be asymptomatic. Authorities are tracing the taxi driver and all members of the couple’s traveling group and hotel staff.
Greece has banned all but essential travel from Serbia as the infection numbers steadily rise in the Balkan country.
Greek officials said that all entry points to Greece will be closed to Serbian travelers for one week after Monday morning, July 8. The move comes just days after Serbian authorities re-imposed lockdown restrictions in the capital city of Belgrade.
Another case involved a tourist from Romania earlier in the week who tested positive for Covid-19 but blatantly disregarded safety protocols after reportedly traveling around the island of Crete for at least 72 hours after her arrival.
Speaking to Greek Reporter, the noted medical professor Dr. John Ioannidis of Stanford University, an expert in the field of epidemiology, questions the somewhat lax attitude Greece has taken, with its use of an algorithm arrived at by answers on a questionnaire  and random testing of arrivals.
“I think it would be useful to require more aggressive (perhaps universal) testing for tourists coming from countries that have low testing rates. Most of these countries make small contributions to the Greek tourism budget anyhow, so one is risking the emergence of an epidemic wave without much tangible financial benefit.”
Arrivals through Greece’s northern land borders from countries with a high rate of coronavirus infections are threatening to derail the country’s remarkable progress in containing Covid-19, infectious disease expert Professor Nikos Sipsas warned on Tuesday.
“Promachonas, the crossing into northern Greece from countries where the epidemic is like a boiling pot, is a problem,” Sipsas said, speaking to Skai TV. “It is a significant danger for Greece.”