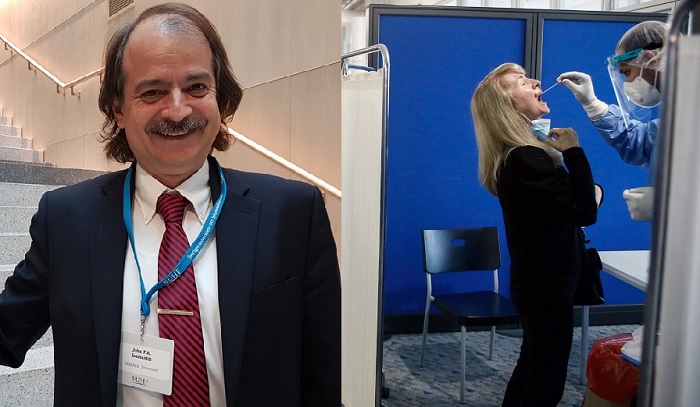 After Greece’s opening up to travelers from much of the rest of the world on July 1, the nation has seen an uptick in the increasing numbers of coronavirus infections.

However, noted medical professor Dr. John Ioannidis of Stanford University, an expert in the field of epidemiology, gives his views on why Greece has had relatively few – approximately 100 at present – “imported” cases of Covid-19 in an exclusive interview with Greek Reporter.

“In most, if not all, countries from where tourists are allowed to come, the current epidemic wave seems to have run its circle and the proportion of people who are currently positive by PCR testing is likely to be very low. People who travel may also have an even lower percentage of positivity than the general population,” Ioannidis explains.

“At the same time,” he adds “we need to realize that not all people entering Greece are tested, so the number of positive people would have been substantially larger, if universal testing were performed. This means that there is a residual risk of unidentified cases entering the country. The counterargument is that among those who test positive by PCR, only a fraction are likely to be also infective, and possibly this fraction is quite small. PCR can remain positive for a long time (e.g. 45 days) after infection, but this does not mean necessarily that the person is infectious.”

Asked what course Greece should now take regarding the campaign to protect its citizens and tourists alike from spreading infection, the noted epidemiologist states “I think it would be useful to require more aggressive (perhaps universal) testing for tourists coming from countries that have low testing rates.

“Most of these countries make small contributions to the Greek tourism budget anyhow, so one is risking the emergence of an epidemic wave without much tangible financial benefit.”

Ioannidis states “I understand that Greece desperately needs tourism funds, since tourism is responsible for about 20% of the GDP.  The Greek and the European COVID task forces include capable scientists and I trust they have put a lot of thought on how to reopen the country to tourism. It is not an easy situation.

“Determining which country is eligible for allowing tourists from is difficult and our knowledge base is incomplete. I just want to caution that it is potentially misleading to base this decision on the number of cases that continue being detected in each country. Countries that deal seriously with coronavirus do more testing and come up with more detected cases. Conversely, countries that do little testing will find few cases, but this does not mean that coronavirus does not exist there,” he cautions.

“Serbia is one example worth discussing, since 20 of the 36 tourist cases today were from there. In that country, the number of cases looked pretty low, but this was simply because relatively little testing was done. With only 11,000 cases detected in Serbia until the end of May, it is likely that the true number exceeded 200,000. Moreover, apparently there were substantial residual foci of epidemic activity. However, I think this is a problem that may be pertinent to Balkan countries in general. Testing in other Balkan countries is even less frequent than Serbia on a population basis.”

Asked if the EU was correct in banning Americans and others from entering most of Europe as of July 1st, the medical professor replied “Clearly there are active foci of epidemic activity in the USA currently, but there is large heterogeneity across the country. Most places in the USA have little or no epidemic activity, while 4-5 states carry the lion’s share of new cases.

“Even within the same state, there are large differences, e.g. if you compare San Francisco versus some locations in Southern California or the Central Valley. Making decisions on travel bans based on country-level averages is problematic. Plus, it runs into the same problem of tending to give clearance to countries that do a poor job at testing and thus hide the problem under the carpet while potentially excluding countries that are more serious with testing.”

According to a Monday announcement, travelers from the UK will finally be able to enter Greece as of July 15th. Asked by Greek Reporter if he believed this was a wise decision, considering their rates of coronavirus infection per capita were even higher than the US, the physician shared his somewhat startling view, replying that “The daily average of new cases detected in the UK is 620 cases per day in the last week. Greece has had 24 cases per day in the same time frame.

“However, the UK has six times the population of Greece and moreover it performs about five times more tests per capita than Greece. So the two countries are probably quite similar in terms of epidemic activity.”

Regarding the measures that Greece should be taking right now to minimize the coronavirus threat now that flights have resumed, Ioannidis replied “I really hope that this adventure will not get complicated with a resurgence of a new epidemic wave, but this cannot be taken for granted and it is wise to prepare for such a wave regardless of whether it comes or not.

“Greece probably escaped the first wave for many reasons, but perhaps the main one was that international arrivals to Greece in February are at an annual nadir. To be optimally prepared, Greece needs to strengthen its public health and hospital resources and its ICU capacity. I was very happy to hear that the Niarchos philanthropic foundation has made a large donation to help escalate ICU capacity.

“I have also stated multiple times since February that we should perform more aggressive testing and also include repeated epidemiologic surveillance assessments. Moreover, it is important to protect thoroughly (with draconian hygiene and hospital control measures plus recurrent testing of personnel during periods of suspected epidemic activity) our hospitals and nursing homes. Approximately 5-10% of the population are at high risk and we need to be extremely cautious with their exposures. Regular hygiene measures also continue to be valuable for everyone, regardless of low or high risk.”

Over the recent weeks, the US has experienced widespread demonstrations in the streets following the death of George Floyd after he was arrested in Minneapolis. Greek Reporter asked the medical professor’s opinion on what role the demonstrations may have played in the recent upswing in the number of COVID infections there.

“The recent sad events were a major trauma to the national psyche, and thus it made sense to rise against injustice and inequality with demonstrations. Of course, viruses can spread during such activities, so we have to be extra cautious,” he stated.

“I am cautiously optimistic that if this time we manage to protect the susceptible individuals and settings (e.g. nursing homes, hospitals, some particular high-risk jobs, homeless shelters, prisons), we will not see situations like what we saw in New York City. The infection fatality rate of this virus can vary one thousand-fold depending on who the people infected are (young, healthy versus elderly and debilitated). However, we need to remain vigilant.”