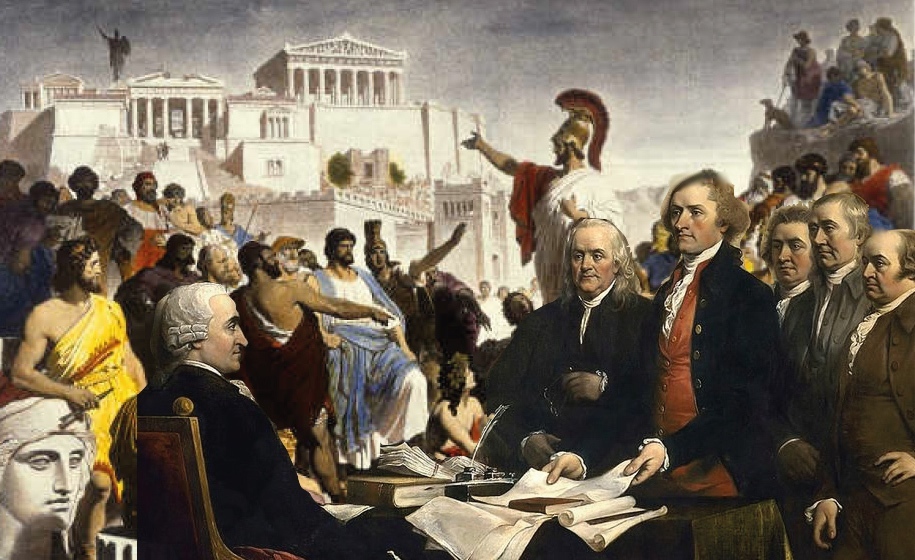 “Two hundred and thirty-six years ago, a new American Nation was founded on an old Greek principle — democratic rule by a free people. We trace this enduring idea to ancient Hellas, where Greeks brought forth the world’s first democracy…”

“As America’s Founders built a Government of the people, by the people, and for the people, they drew inspiration from the democratic pioneers who shaped a small group of ancient Greek city states,” is another excerpt from the proclamation, recognising the contribution of the Greek ideal of democracy to the American Declaration of Independence 244 years ago.

The ideals that helped shape and develop the American democratic republic after 1776 owe a debt to the ancient civilization of Greece. All of America’s founding fathers had studied ancient Greek philosophy, drawing inspiration about morals, ethics and the sense of independence, all fundamental principles of a democratic society.

Furthermore, the Ancient Greek principle deriving from the great philosophers that man is the measure of all things was the groundwork for humanism. And the ideals of freedom, equality and justice stem from humanism and the notion that man is capable of many things and his life does not depend on the whims of the gods.

It was Epicurus (c. 341-270) that influenced Thomas Jefferson in the belief that happiness was humanity’s main goal and it could be attained through moral and noble actions, hence the right to “the pursuit of happiness” in the Constitution.

US State and Greek polis

A U.S. state resembles the structure of an ancient Greek polis or city-state. A polis was composed of an urban center and the land surrounding it, developments similar to that of the major cities and state capitals in the United States and the rest of the Western World.

In ancient Greece, some of the main city-states were Athens, Sparta, Corinth, Thebes, and Syracuse. These city-states acted independently for the most part. However, sometimes they engaged in a war against each other. They also banded together to defend Greece from foreign invaders.

Historian and professor Carl J. Richard notes that from Herodotus and Plutarch, the founders learned the story of the Persian War, the near miraculous victory of the tiny Greek republics over the seemingly invincible Persian empire.

“From this tale, the founders learned that it was possible for a collection of small republics to defeat a centralized monarchical empire in a war for survival. This was a crucial lesson because the founders faced just such a power in the Revolutionary War,” Richard adds.

All Greek city-states had sets of rules by which the people lived in observance and laws they were required to obey. In ancient Greece, the idea of Rule of Law came from philosopher Aristotle and his belief in natural law. He claimed the existence of a higher justice in nature—certain essential rights—that superseded the laws written by humans. Aristotle believed that people should align themselves with this natural law and govern by its ethics.

In the United States today, the Rule of Law is a principle that ensures that all laws are publicly accessible, equally enforced, and independently judged and that they adhere to international human rights ethics. The Rule of Law is important because it allows all individuals and institutions (including the government itself) to be held accountable for their actions. By agreeing to follow the Rule of Law, the United States can prevent abuses of power by leaders who might act as if they are above the law.

F. A. Hayek, in The Constitution of Liberty, traces the very concept of the rule of law to the Greeks. But such should be expected. If the Greeks advocated natural law they would also advocate the rule of such law. This is what Aristotle meant when he said “it is more proper that the law should govern than any of the citizens.”

Another important ancient Greek concept that influenced the formation of the United States government was the written Constitution. Aristotle, or possibly one of his students, compiled and recorded The Constitution of the Athenians and the laws of many other Greek city-states. Having a written constitution creates a common standard as to how people should behave and what rules they must follow. It also establishes clear processes by which people who break the law are judged and those who are harmed as a result can be compensated or given justice.

The original U.S. voting system had some similarities with that of ancient Athens, where every citizen could speak his mind and vote at a large assembly that met to create laws. Citizens were elected to special councils to serve as organizers, decision-makers, and judges. However, the only people considered citizens in Athens were males over the age of 18. Women, slaves, and conquered peoples could not vote in the assembly or be chosen to serve on councils.

The founders of the United States similarly believed that only certain people should be allowed to vote and elect officials. They chose to structure the United States as a representative democracy. This means that citizens elect officials, such as senators and representatives, who vote on behalf of the citizens they represent in Congress. It also means that instead of each individual citizen voting for president directly, a body called the Electoral College officially casts the votes of each state for the president. As in Athens, when the United States was founded, only white, landowning men were allowed to vote. Over time, however, all U.S. citizens over the age of 18 who have not been convicted of a felony have gained the right to vote.

In November 2016, during his visit to Athens, then U.S. president Obama addressed Athenians reiterating the importance of Ancient Greece’s contribution to America’s Independence:

“Twenty-five centuries after Athens first pointed the way, 250 years after the beginning of the great American journey, my faith and my confidence, my certainty in our democratic ideals and universal values remain undiminished.”

Last year, it was the turn of U.S. President Donald Trump to praise Greece for its contribution to the birth of the Great Nation during the annual celebration of Greece’s Independence Day in the White House.

“The U.S and the whole western civilization has been shaped by the achievements of the Greek people,” Trump said inter alia.

President Trump in praise of Greek Americans at the Greek Independence Day ceremony at the White House: “This evening we celebrate the countless ways Greek Americans strengthened our nation…You live by the values that are the foundations of America’s greatness." Full story: https://bit.ly/2OcbQWA