The Holocaust of Greek Jews 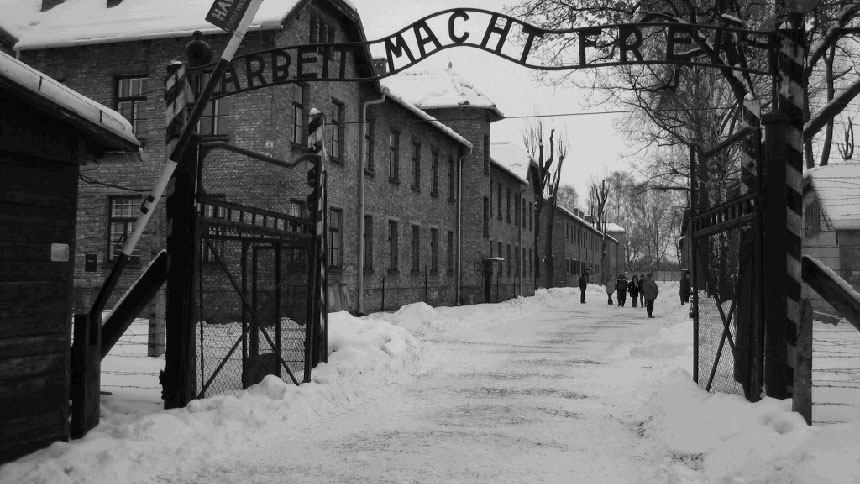 Once thriving communities in several Greek cities, about 59,000 Greek Jews were victims of the Holocaust or 83 percent of the total number living in Greece at the time of World War II and the German Occupation.
Thessaloniki was the cultural hub for Sephardic Jews who had been expelled from Spain in 1492. The city counted 50,000 Jews, about two- thirds of Greek Jewry. Thessaloniki Jews were politically, economically, and socially well-integrated into Greek society.
During the German Occupation (1941-1944), Thessaloniki Jews suffered a terrible fate. The Nazis confined them to ghettos, forced them to wear a yellow star on their clothes and banned them from public spaces. Jewish newspapers were closed, and synagogues, businesses, and hospitals looted.
In 1942, German authorities, with the assistance of local authorities, demolished an ancient Jewish cemetery. Today, it is the site of the campus of the Aristotle University of Thessaloniki.
On July 11th, 1942, a day that would come to be known as “Black Shabbat,” Jewish men aged 18-45 were called to Eleftherias Square for forced labor and made at gunpoint to perform humiliating physical activities. A year later, some 54,000 Jews were sent to Nazi extermination camps, mainly Auschwitz-Birkenau. More than 90 percent of the city’s Jewish population was murdered.
In Thrace in 1943, the Bulgarian authorities that had allied with the Germans deported Thracian and Macedonian Jews to the Treblinka death camp and fewer than 10 percent of the total 4,000 survived. They even arrested and deported the three Jews who were living on Samothrace island.

In Ioannina, there were the Romaniote Jews, who called themselves Yanniote Jews. They were a thriving community of about 4,000 to 5,000 at the beginning of the 20th century.  By the time World War II started, there were 2,000 left because the rest had immigrated, mostly to America. By the end of the Nazi occupation, only 50 survived, the rest met a horrible fate in the death camps.

In Athens, the Italian occupation forces did not participate in the deportation of Jews to the camps. However, when Italy surrendered to the Allies on September 8th, 1943, its occupied zone was turned over to the Nazis who put Jews on trains and sent them to their death.
The local population participated little in the destruction of the Jewish community. About two-thirds of Athens’ Jews survived the war due to the brave actions of Archbishop of Athens Damaskinos and Police Commissioner Angelos Evert, who had issued many fake identification cards for Jews and had implored Athenian citizens to help them.
On the island of Zakynthos, the city mayor and bishop hid all 275 Jews living there.
Some 59,000 Greek Jews perished during World War II, murdered by the Nazis; about 83 percent of the total Jewish population. It was one of the highest percentages in Europe. 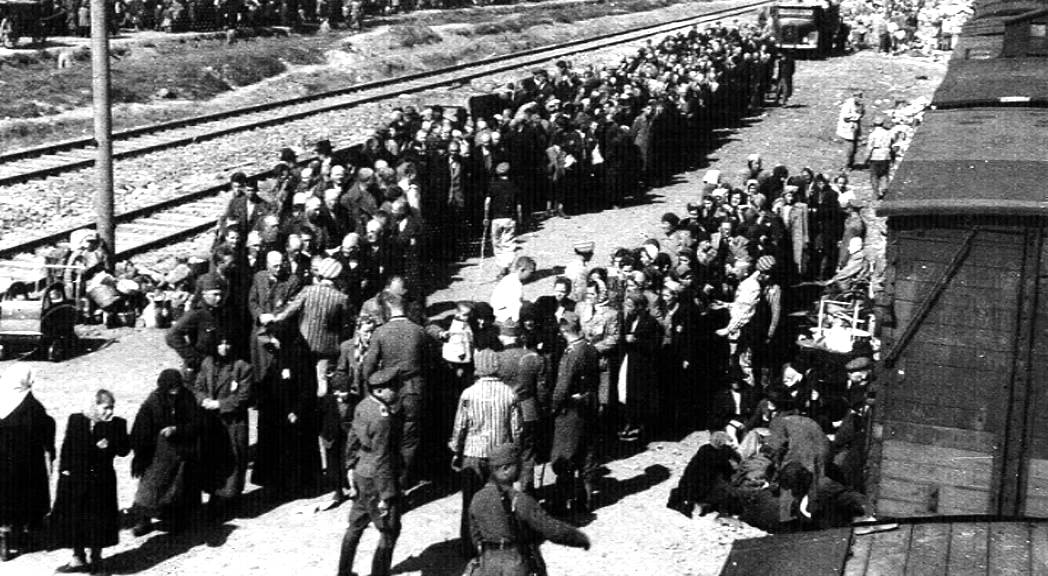 
She was the only survivor from all her family. Her parents and siblings were killed.
Most of the Jews who survived lived in Athens.
“I was but a child but I forgot nothing,” 83-year-old Lola Angel recounts, talking to AFP about the days in the Nazi concentration camp. “The memories still haunt me, and the intense smells of the camp are ever-present.”
The Angel family fled to Athens from Thessaloniki. In April 1944, the little girl and her family were put on a train to an unknown destination. “We were packed atop each other and could hardly breathe. Many died en route,” she said.
At Bergen-Belsen, the Nazis used another method. “It was slow death by disease. After the Allies landed in Normandy, the Nazis began concentrating people there, hoping they would die of typhus.”
Her father fell ill with the disease while Lola caught measles. As a child, she survived through her childhood distractions, like her doll.
Just before Bergen-Belsen was liberated in April 1945, little Lola was removed by train to north Germany, to be exterminated before the Allies arrived.
The girl was lucky, though. After days of traveling, the soldiers fled and abandoned the train. The prisoners were found by American soldiers a few hours later. Most of them were close to death due to starvation and exhaustion.
“Even today I have nightmares. And I rarely board trains,” Lola Angel told AFP.

Brave Greeks who saved Jews during the Holocaust
To date 352 Greeks have received the title of “Righteous Among the Nations”,  an honorific used by the State of Israel to describe non-Jews who risked their lives during the Holocaust to save Jews from the Nazi claws. The best known of them are the late Archbishop of Athens and All Greece Damaskinos, Greek resistance heroine Lela Karagianni, former Chief of the Hellenic Police Force Angelos Evert, former Mayor of Zakynthos Loukas Carrer, late Metropolitan of Zakynthos Chrysostomos, late Metropolitan of Dimitriada Ioakeim.
There are several stories of Greeks who helped Jews avoid a horrible death in the extermination camps. Jews had been in Greece for centuries and were incorporated in the country’s culture. During the Nazi occupation, the bonds between the two peoples became evident as numerous Greeks risked their own lives to protect their fellow men.
The most striking example was the story of the Jews of Zakynthos. In 1943, the German commander of Zakynthos asked the island’s mayor, Loukas Carrer, to give him a list of every single one of the Jewish people who lived on the island.
The mayor knew what would happen to the 275 Zakynthos Jews and consulted with the bishop of the island, Chrysostomos. The two men took the brave decision to deny writing down the names of these people.
The commander became furious and threatened the two men to come up with the list or else he would order them shot. The next step the two community leaders took was to write a list with two names only. The mayor’s and the bishop’s.
Along with that, the mayor wrote a letter directed to Hitler himself, saying that he put all the island’s residents under his wing, in the hope that the German leader would not give orders to wipe out a whole village. He also advised the 275 island Jews to disappear from the public eye and hide.
Indeed, such order never came to Zakynthos and the Germans put the deportation plans on hold and stopped asking for the list. All 275 Jews of Zakynthos never fell in the hands of the Nazis.
Then there is the story of Melpomeni Dina, the brave teenager from Veroia who along with her two older sisters hid all seven members of the Mordechai family in her home during the Nazi persecution. She is still alive today, at 92, and in November 2019 had a heartbreaking meeting with all the descendants of the family she had saved in Israel.

The grandmother of Prince Charles who saved Jews in Greece
On Friday, Britain’s Prince Charles visited his grandmother’s tomb at the church of St Mary Magdalene in Jerusalem, Israel. It is a little known historical fact, but Princess Alice had sheltered Jews in Greece during the Holocaust.
The Prince of Wales paid tribute to his grandmother on Thursday at the World Holocaust Forum, which was attended by dozens of world leaders and coincided with the 75th anniversary of the liberation of the Auschwitz death camp.
“I have long drawn inspiration from the selfless actions of my dear grandmother, Princess Alice of Greece, who in 1943, in Nazi-occupied Athens, saved a Jewish family by taking them into her home and hiding them,” Charles said.
Princess Alice is named Righteous Among the Nations, an honor bestowed by Israel’s Yad Vashem Holocaust Memorial on non-Jews who risked their lives to save Jews during the Holocaust.
She was married Prince Andrew of Greece in 1903 and had five children, including Prince Philip, the future Duke of Edinburgh and consort to Queen Elizabeth II. Political turmoil in Greece led to the family’s exile twice.
Later in her life, she was diagnosed with paranoid schizophrenia and spent years in a sanitarium in Switzerland. She became a Greek Orthodox nun in 1928 and returned to Athens in 1940, where she devoted her life to the needy.
During the German Occupation, Princess Alice sheltered three members of the Cohen family, circumventing the Gestapo questioning.