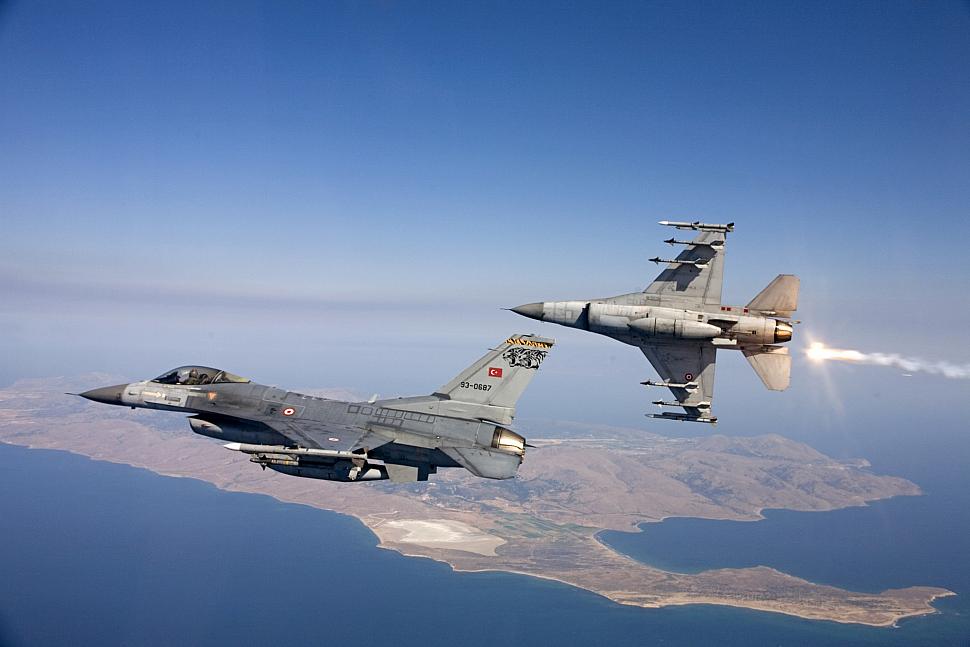 The previous decade has been marked by a barrage of Turkish provocations in the Aegean Sea, escalating steeply in late 2019, according to new data released recently by the Hellenic National Defense General Staff.
The culmination of these practices was in early December, when Ankara signed an illegal memorandum of understanding with Libya, arbitrarily delineating maritime borders between the two countries.
The number of violations of Greek national airspace by Turkish military aircraft reached 4,811 in 2019, the largest number in one calendar year since 1987. There were 384 mock dogfights between Greek and Turkish fighter jets last year, while there were only 13 such fights in 2010.
At the same time, the number of violations of Greek territorial waters by Turkish Navy vessels last year were 15 times greater than in 2010. All of the above incidents illustrate why 2019 might well come to be known as the year of escalation of Turkish provocations.
But an analysis of Turkish sea and air violations over the entire decade from 2010 to 2019 shows that the serious nature of the repeated challenges has also been steadily increasing year by year — not just the sheer number of them.
The escalation of Turkish aggression throughout the past year, especially after the signing of the Turkey-Libya pact and Greece’s reactions which followed, caused concern in Athens. This is due to the fact that there were several instances in which Ankara seemed to drive tensions to a peak and flirt dangerously with a military incident in the Aegean.
It is noteworthy that on December 27, 2019 Turkish aircraft flew over the Greek islands of Panagia, Oinousses, Agathonissi, Anthropophagus, Lipsi, Arkio and Agrelousa a total of 20 times.
One decade earlier, Ankara was already playing with fire as Turkish fighters continually violated Greek airspace when, within 24 minutes, Turkish jets had flown 12 times over Oinousses, Panagia and Ro. The number of overflights by Turkish aircraft on Greek islands at that time reached a record high of 124.
In contrast, in 2010 the corresponding number was 20 and during 2011 there were only four.
It is indicative of this problem that Turkish fighter jets flew 44 times over Greek islands in the month of December of 2019, when they did so 47 times during the entirety of 2018. It should be noted that the flights of armed Turkish aircraft over populated Greek islands are not casual in any way and are a clear indication of a territorial dispute.
With flying armed aircraft over populated Greek islands, Ankara seeks to be marking them as belonging to a gray zone, thus challenging Greek sovereignty. During 2019 there were dozens of such overflights above the islands of Panagia, Oinousses and Ro.
Experienced aviation officials attribute the increased violations of Greece’s national airspace to the irritation of Turkish pilots with the status quo and, perhaps surprisingly, to their inexperience as well, because most experienced pilots were removed from service after the failed coup attempt against President Recep Tayyip Erdogan in July of 2016.
Greece’s Ministry of Defense is also concerned about the challenges presented by the new type of aircraft that Ankara is employing. This year, for example, the Turkish Airforce has used unmanned aircraft (drones) several times in their provocative flights over the Aegean.
And the disturbing phenomenon of Turkish drones flying over the Isle of Ro was recorded for the first time this year.
These violations are part of a wider plan showing Turkey’s expansionist aims. Erdogan also launched his so-called “Blue Homeland” campaign in 2019, issuing an accompanying map showing half of Greece’s Aegean islands, along with parts of Thrace and the northern part of Cyprus, as Turkish territory.
The sharp rise in Turkish aggression recently is evidenced by the statistics collected by the Hellenic National Defense General Staff. It is noteworthy that in 2010 and 2011 there were 11 mock dogfights, or air confrontations in which no ammunition was fired, each year, and only one in 2012. There were none for the whole year of 2013.
The number of mock dogfights began rising sharply from 2015 onward. That year, there were 80 such fights, and the number almost doubled in 2017, to reach 384 in 2019.
The same aggressive behavior appeared in Greek territorial waters as well. According to the same data provided by the Hellenic National Defense General Staff, the number of violations of the country’s national waters by Turkish Navy warships has been steadily increasing since 2010.
The number of such violations in 2010 was 133. In 2015 the number had increased to 299 and in 2019 it reached the staggering figure of 2,032.
A large number of Turkish violations had been recorded in 2018 as well, but the major provocation that year was when a Turkish Coast Guard vessel rammed a Greek Coast Guard boat at Imia.