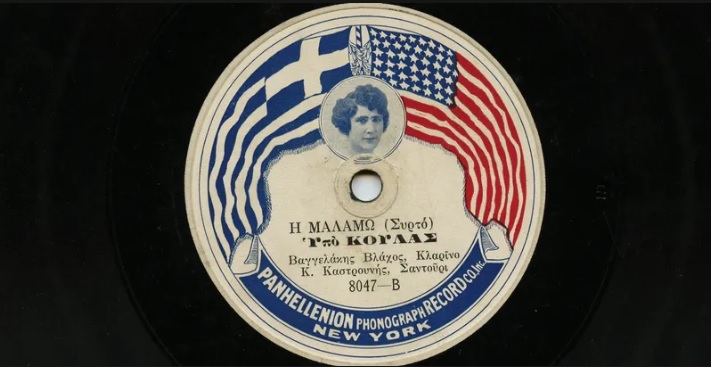 The new “Greek Music in America Archives Project,” funded by the National Endowment for the Arts in 2019-2020, will be the first-ever comprehensive and publicly-accessible collection of Greek music recorded in America, or recorded in Greece by American companies, from 1896 to 1985.

Comprised of analog discs, audiotapes, piano rolls, cylinders, and associated ephemera such as record catalogs, sheet music, images and other media, this would be the first such time such a resource has ever been compiled.

The endeavor is a collaboration between Florida Cultural Resources, Inc. and the Archives of Traditional Music (ATM) and Indiana University. The director of the ambitious project is Tina Bucuvalas, who organized it in consultation with archivists and music specialists.

The millions of members of the Greek diaspora naturally brought the music of their homeland with them to their new nations. Music was a large part of most social occasions, bringing people together in song and dance.

It was such an invaluable component of Greek communities that it formed a kind of cultural glue. Greek music record production became a natural outgrowth of this need for Greek-Americans to keep the memories of their homeland alive.

Along with its preservation through live performance and record production, there continued to be permutations of Greek music, as the new land offered new and diverse influences to it. Although nostalgia for the homeland was predominant – and therefore most music recorded in America was traditional – sometimes new styles also came into the mix.

From 1896 to 1942, over 1,000 records featuring Greek music came onto the market in the U.S. and thousands more have been released since that time, as new recording techniques made it possible to record sound with greater acoustic fidelity.

The new project is comprised of three parts: 1) surveying current holdings in the Archives of Traditional Music or materials relevant to the GMAAP; (2) acquiring about 1000 recordings not already in the ATM; 3) cataloging newly acquired materials using the Folklore Collections Database of the National Folklore Archives Initiative.

Along with Bucuvalas, the team is comprised of archivist/folklorist Andy Kolovos, who has expertise in archiving folklife and audio materials, as well as knowledge of collections nationwide and recorded Greek music connoisseurs Meletios Pouliopoulos and Steve Frangos, who will acquire the collection.

Tina Bucuvalas, the Director of the Greek Music in America project

The granddaughter of Greek migrants, Bucuvalas was always interested in culture and folklore. She received a master’s degree in Folklore and Mythology from the University of California, Los Angeles and a doctorate in Folklore from Indiana University.

The Greek-American folklorist worked on public programs there while coauthoring a book, South Florida Folklife, with Peggy Bulger and Stetson Kennedy. Bucuvalas was once again hired by the Florida Folklife Program in 1995, where she served as State Folklorist for 13 years documenting a wide array of traditional cultural elements.

Along with her work as State Folklorist, the Greek-American also produced public radio shows, coauthored Just Above the Water: Florida Folk Arts and, impressed by Florida’s Greek community, she applied for and received a Fulbright Scholarship to study public folklife in Greece.

In 2009, she was hired as the Curator of Arts and Historical Resources for the City of Tarpon Springs, a town with a thriving Greek community. She worked on integrating  folklife into historic preservation and successfully nominated Eatonville and Rose Hill Cemetery for listings on the National Register of Historic Places.

AMC Will Begin to Accept Cryptocurrency as a Form of Payment