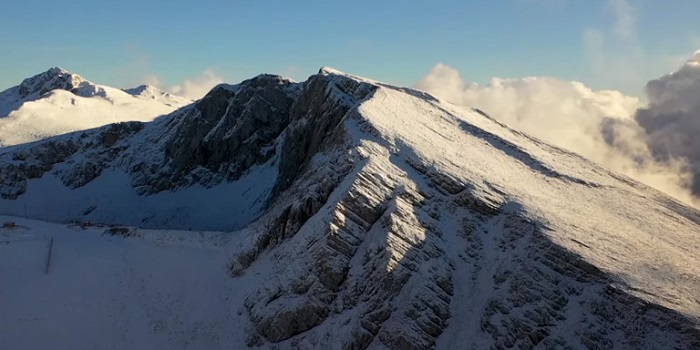 A drone video has recently captured the mesmerizing magic of Mount Parnassus in central Greece after the November snows covered its craggy peaks.
Parnassus, measuring 2,457 meters (8,061 feet), is one of the highest mountains in Greece, towering above the ancient site of Delphi and offering spectacular views of the surrounding mountainous countryside and olive groves.
According to Greek mythology, this mountain was sacred to Dionysus and the Dionysian mysteries; it was also sacred to Apollo and the Corycian nymphs, and it was the home of the Muses.

The significant biodiversity, both in flora and in fauna, led Greek authorities to the establishment of the National Park of Parnassus in 1938, the year when the systematic mining of the mountain’s bauxite also began.
The Park itself comprises a stunningly-lovely undisturbed landscape of 15,000 hectares (36,000 acres) spreading across the mountainous region between Delphi, Arachova and Agoriani. The park is home to wolves, wild boar and various birds of prey as well as badgers and weasels.
The slopes of the massive mountain are also home to two ski areas, Kellaria and Fterolakka, which together make up the largest ski resort in Greece.

Capital Link sponsored a webinar on Tuesday highlighting the importance of Greek culture and education amongst the Greek-American diaspora.
Environment

People who have not visited the beautiful Greek island of Lemnos may consider it a  moonscape due to its arid terrain.