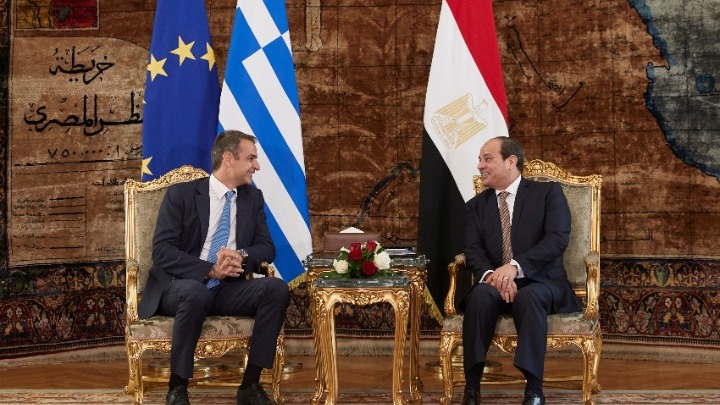 Egypt, Cyprus, and Greece condemned on Tuesday the ”unlawful and unacceptable” bid by Turkey to drill inside waters where Cyprus has exclusive economic rights.
President Abdel-Fattah el-Sissi hosted a trilateral summit with Cypriot President Nicos Anastasiades and Greek Prime Minister Kyriakos Mitsotakis in Cairo.
Anastasiades has told a joint news conference that Cyprus will resort to ”all available diplomatic means to halt Turkey’s aggression.”
The Egyptian president welcomed an agreement for the non-taxation by third countries of investments between the three countries. He also condemned actions, including terrorism, that “create a new crisis in the region” and stressed that terrorism was a phenomenon that must not be linked with religion.
The three leaders also vowed to step up efforts to tackle illegal migration across the eastern Mediterranean and hone their anti-terrorism tactics.


In an interview with the Egyptian newspaper Al Ahram on Monday, Mitsotakis stated that this trilateral cooperation between the three countries is ”a strong institution of multidisciplinary and expanding regional cooperation, open to all states in the region that base their foreign policy and their relations with their neighbors on respect for international law and the practical application of the principle of good-neighborly relations.”