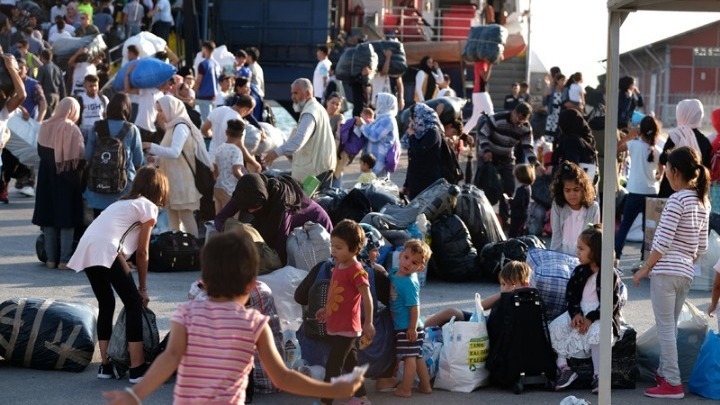 More than 700 migrants and asylum seekers who originally landed on the shores of Lesvos arrived on Tuesday morning at the port of Thessaloniki, as the Greek government intensifies its efforts to reduce overcrowding on the islands.
The chartered vessel called “Aqua Blue” docked in the northern city of Thessaloniki just one day after the arrival of another ship carrying more than 630 people, mostly Afghan families, who had also been staying in Lesvos’ Moria camp.
Slightly more than half of the new arrivals are being taken to a temporary camp in Nea Kavala, northern Greece, but authorities stated that they will be moved again next month to a camp which is currently under construction.
The remainder of the migrants will be transported to other facilities in northern Greece.
Various NGO’s have described camps on the Greek islands as stretched to the breaking point, with men, women and children forced to live in close proximity in squalid conditions.
The Greek government on Saturday announced a new “robust” migration policy that it says will address the increase in illegal immigration to the Aegean islands which has occurred over the last several months.
“We are seeing huge waves being brought in by traffickers, using new methods and better and faster boats,” said Michalis Chrysochoidis, the country’s civil protection minister, after the measures were announced during the weekend.
“If the situation were to continue, we’d have a repeat of 2015. We are going to take measures to protect our borders and we are going to be much stricter, much faster in applying them,” he declared.