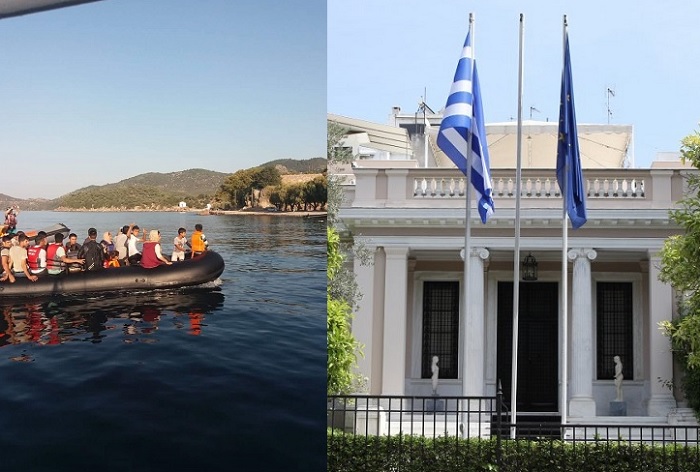 The Greek government on Saturday announced a new “robust” migration policy that, it says, will address the increase of migration flows to the Aegean islands over the last months.
At a meeting of the Government Council for Foreign Affairs and Defence (KYSEA) chaired by PM Kyriakos Mitsotakis, a package of measures was adopted to address overcrowding on the islands, improve border surveillance and tighten up the asylum process.
Mitsotakis called for extraordinary meeting hours after Greek authorities and aid groups said hundreds of people had reached the island of Lesvos in more than a dozen dinghies in a single afternoon.
According to government spokesman Stelios Petsas, it was decided:
– The transfer of migrants to existing facilities on the mainland to decongest the islands.
– The immediate transfer of 116 unaccompanied children to reunite with their families in other European Union countries with which agreement has already been reached. In the coming weeks, an additional 250 unaccompanied children will be transferred to safe structures on the mainland.
– The increased border surveillance, in cooperation with FRONTEX and the European authorities, as well as with NATO. In this context, the adoption – after 4.5 years of inactivity of the previous government – of the National Integrated Maritime Surveillance System – a 50 million euro budget system that interconnects the Coast Guard and the Armed Forces systems through the use of new technologies (“simple” and thermal cameras, drones, etc.)
– The change of the institutional framework for the asylum procedure by abolishing the second part of application examination aiming at – in the event of an asylum application being rejected – the immediate return of the applicant to the country of origin. Always respectful of the acquis communautaire and of the full implementation of the European Union-Turkey Joint Declaration. In this context, Turkey should also meet its commitments.
– The increased police inspections on islands and mainland Greece to identify persons who had applied for asylum but their application was rejected by the courts. There are several thousand such cases for which the previous government has taken no action. The Police have already identified approximately 1,000 persons whose return process is underway.
– The immediate supply of 10 new small boats for rapid response in case of movements of migrants/refugees from traffic circuits departing from the Turkish coast to the Greek islands.
– The support of local communities by strengthening the necessary infrastructure and staff.
(With information from AMNA)

If a new law being drafted in Athens is passed, owners of a legendary breed of Greek hunting dog may be forced to retreat into the wilderness.
Business