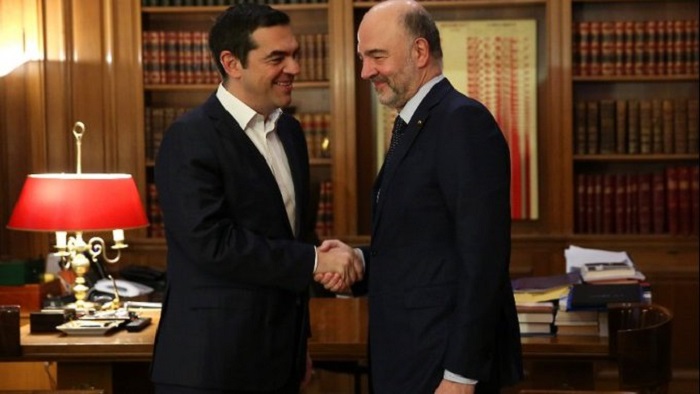 EU’s Economy and Finance Commissioner Pierre Moscovici said on Thursday that Greece must deliver on its promised reforms to send a positive signal to debt markets before a meeting of eurozone finance ministers next month.
“I hope and I expect that there will be significant results in the (next) Eurogroup which will send a crystal-clear message to markets that Greece is credible,” Moscovici told Prime Minister Alexis Tsipras in Athens.
The European Commission said on Wednesday that Greece has made progress on reforms; however, it is not enough to receive the 750-million-euro profit from Greek bonds held by eurozone central banks.
Athens now must complete the sixteen vital reforms promised to its eurozone partners before a March 11, 2019 Eurogroup meeting.
Moscovici specifically referred to two outstanding issues, including the sale of the Greek Public Power Corporation’s lignite units and the protection of families’ primary residences from foreclosure. He added, however, that “we are in the right direction.”
The Commissioner pointed out Greek authorities’ “strong commitment” to cooperate together, and explained that this cooperation is not a “disguised memorandum, in no case is it a memorandum.”