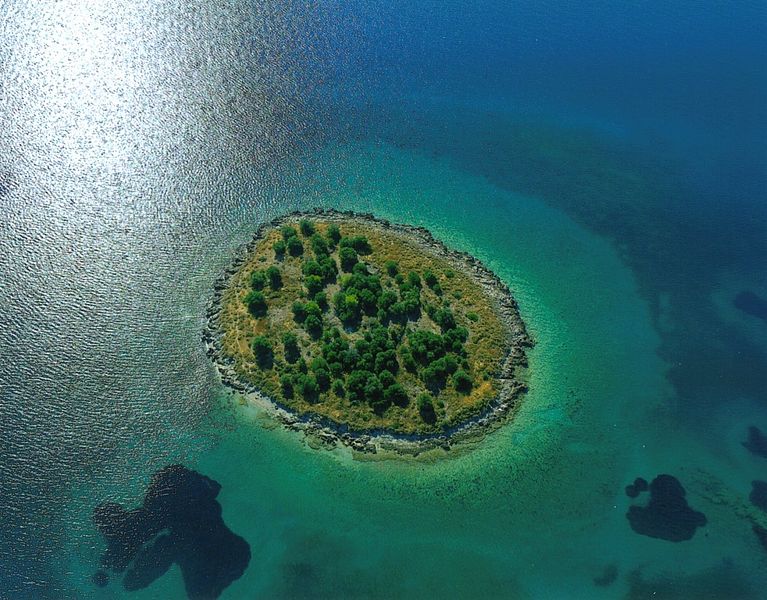 Now that many of us in the northern hemisphere are beginning to tire of the bleak white/gray/black palette of winter, here comes some great news. You do not have to be a billionaire to buy one of the dozens of small islands dotting the blue Aegean or the Ionian Seas.
Many such islands have been put on the market since the beginning of the recent financial crisis in Greece. Their owners, who many times inherited them, may be selling because of the high maintenance costs and taxes. They might also desire more liquidity which would allow them to borrow and invest.
The Greek Islands are diverse, consisting of over 6,000 total isles and islets, of which only 227 are inhabited. Approximately 140 are privately owned.
You can buy your own private island and build your own house according to your specifications, to either live in permanently or just as a holiday home. Of course, you can buy a private island as a business opportunity as well, and build a complex of villas or houses.
The majority of private islands in Greece are uninhabited, and those are classified as either “with restrictions” or “without restrictions.”
The private islands with restrictions fall under special legislation or agreements. In order to build on these islands you would need a special permit from the Greek state which will provide for the removal of existing restrictive encumbrances. In some extreme cases, this could even require a law to be passed in the Greek Parliament.
The private islands without restrictions are much more buyer-friendly. You can indeed build on these islands under existing Greek building laws. But this is still easier said than done, because in many cases the infamous Greek bureaucracy has put an end to major purchases.
There are dozens of real estate websites offering private Greek islands for sale. Usually the asking price is not revealed. For the purposes of this article we used information from the following sites: www.privateislandsonline.com and www.vladi-private-islands.de.
For your wintertime reading enjoyment, here is a partial list of some of the magnificent Greek islands currently up for sale. One of them could be yours if the stars align just right.
Patroklos


A cultural landmark property having enormous symbolism, this 643-acre Greek isle lies just opposite the promontory where the Temple of Poseidon stands, at the sea gateway to Athens. Patroklos Island has been coveted by investors for years. The north-northeast side of the island is quite flat, reasonably traversible by vehicle, and even has soil suitable for cultivation. The island has 5,050 olive trees as well as pine trees and a number of dense bushy areas. About 150 goats owned by the family graze on the island. The northern section covers approximately 275 acres of cultivable land, the remainder being rocky, with green-hued marble as the predominant stone.
Saint Thomas 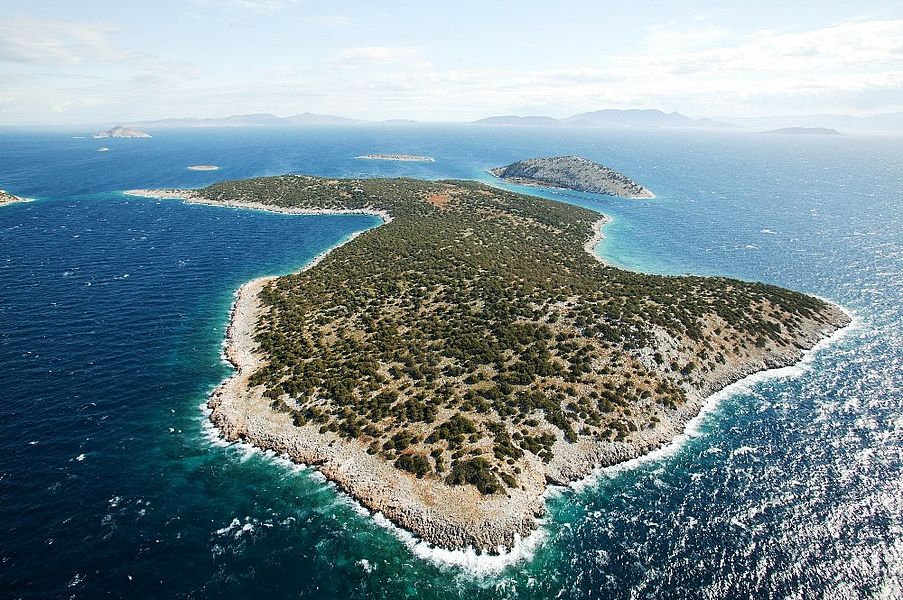 Located in the Saronikos Gulf, the 300-acre St. Thomas Island is 20 minutes from Corinth and 45 minutes from Athens by water taxi. Part of the Diapori chain, the island is perfect for someone who would like to construct a luxury holiday house and simply live it up all summer long.
Vouvalos 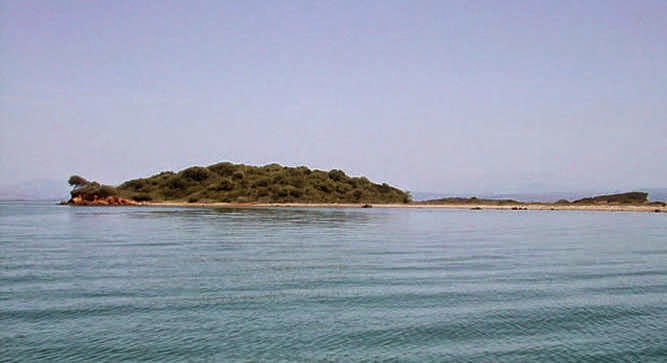 A rocky island set in the Amvrakikos Gulf in the northern part of Greece, the 31.63-acre Vouvalos is a verdant island graced with beautiful beaches. Because of its unusual shape, the island also includes several natural harbors, as well as a picturesque lagoon in the center of the island.
Stroggilo

Stroggilo is an uninhabited rocky island west of Patmos in the Dodecanese, in the eastern Mediterranean. At 54 acres, it is located between the islets of Agrelousa and Marathos, east of Arki and north of Lipsi. In 2014 it was rumored that Hollywood star Johnny Depp expressed an interest in buying the island.
Kato Antikeri

Kato Antikeri is a large privately-owned island located in the Cyclades near Amorgos. At 272 acres, it is a perfect size for either a private residence or larger development. Unlike neighboring islands, Kato Antikeri’s terrain is flat, which makes it well-suited for major construction projects. The island already has two harbors, electricity and telephone lines, and it includes two houses and a small church.
Petalas 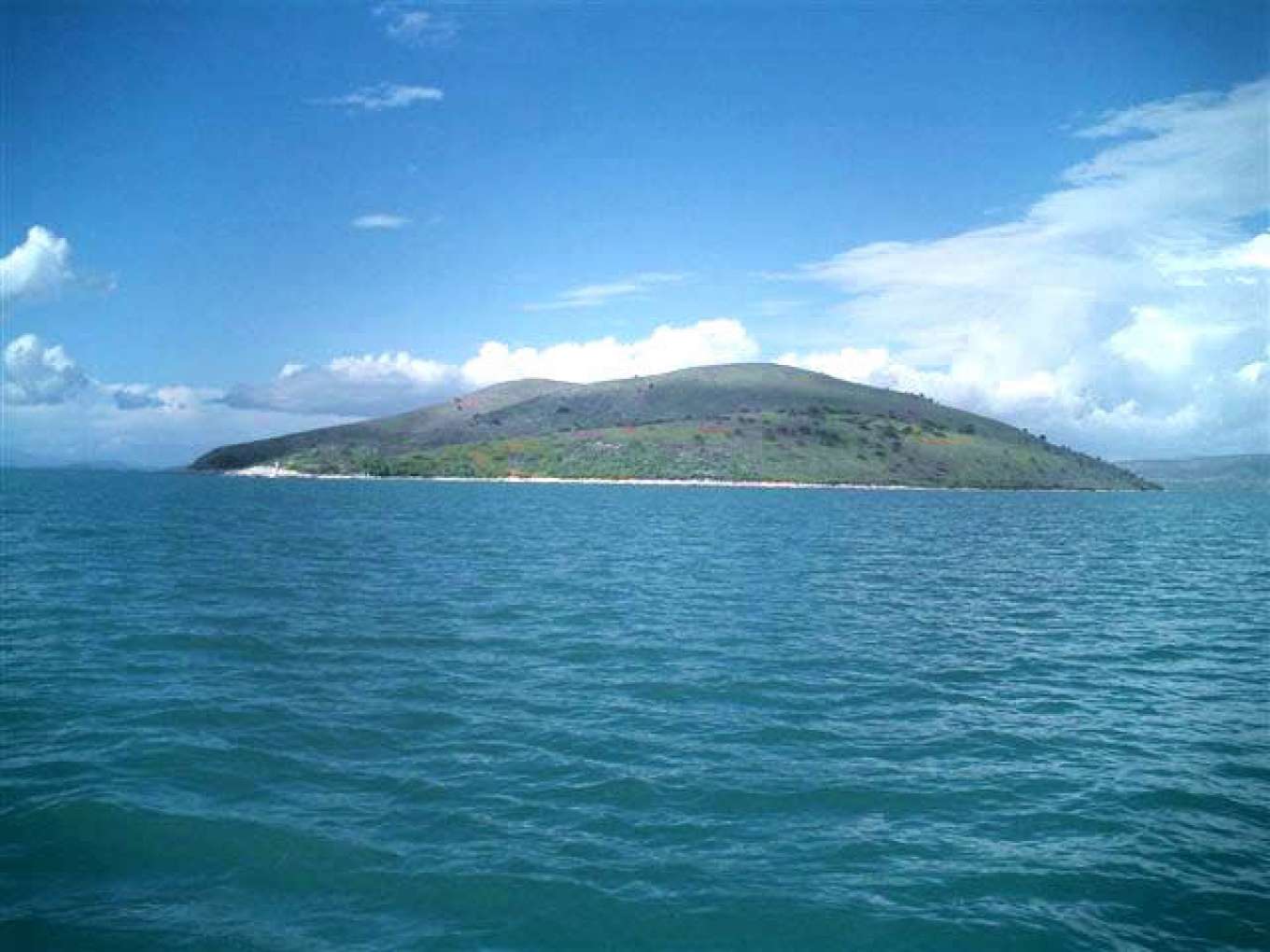 The largest island in area in the Echinades chain, at  5.5 square kilometers or 2.1 square miles, Petalas belongs to the larger Ionian Island group. Some historians have conjectured that Petalas is actually the ancient “Dulichium”, whence the Iliad said that 40 ships sailed to Troy. However, Strabo and most modern authors believe that ancient Dulichium is actually Makri, a nearby island.
Petalas Island has about 4000 olive trees and shrub/dwarf bushes. The terrain of the island is composed mostly of red, rocky soil.
Kardiotissa

The island of Kardiotissa is located in the heart of the Cyclades complex between the island of Folegandros (seven minutes away by speedboat) and the island of Sikinos (ten minutes by speedboat). There is daily transportation to the port of Piraeus and neighboring islands which is maintained throughout the year.
St. Athanasios

The charming, almost completely round island of St. Athanasios lies in the Gulf of Corinth, 1.5 miles from the city of Itea and a short distance from Delphi. It is also near the ski resort of Parnassos and the historic port of Galaxidi. The vegetation on this small, private island of 10,811 square meters (116,369 square feet) includes some pine and olive trees and there is a small sandy beach along the northwestern coast.
Trinity Island

This idyllic Greek island, located close to Athens, boasts a colourful past. It has been owned by the family of the former Keeper of the Royal Privy Purse of the three kings of Greece since 1958. Trinity Island is mostly flat, with a lavish abundance of both ornamental and crop vegetation. It has about 350 olive trees, as well as pistachio trees, pine and cypress forests and a variety of fruit (pomegranate, apricot, peach, almond, fig) trees. Among the colorful ornamental shrubs to be found on this Greek island are oleander and hibiscus.
Tragonisi

Part of a trio of islands off the Peloponnese, Tragonisi Island is 45 minutes from Athens by boat. Very close to the small town of Korfos, Tragonisi boasts a sandy beach. The 90 acres of this bright, sunny isle in the Peloponnese is full of potential. The bright blue seas surround this member of a triplet of islands off the Grecian coast, offering stunning views of the gleaming water, sweeping shore and other isles in the neighborhood.
Omfori

This partially-developed Ionian island has only one functional building, the beautiful tiny chapel you see in this photo. However, permission has been granted for other buildings to be constructed on 20% of the island. “Private Islands Online” says in their prospectus that if the buyer can prove that it would be a good investment to build more properties on Omfori, the Greek government is likely to grant further permission.
So there you have it… just fodder for winter daydreams… or perhaps future plans? This might be the best time in many years to turn your dream of owning a Greek island into reality.