GRNews
GreekReporter.comGreeceHappy Name Day, George! Here are a Few Things You May Not...

Happy Name Day, George! Here are a Few Things You May Not Know about your Name 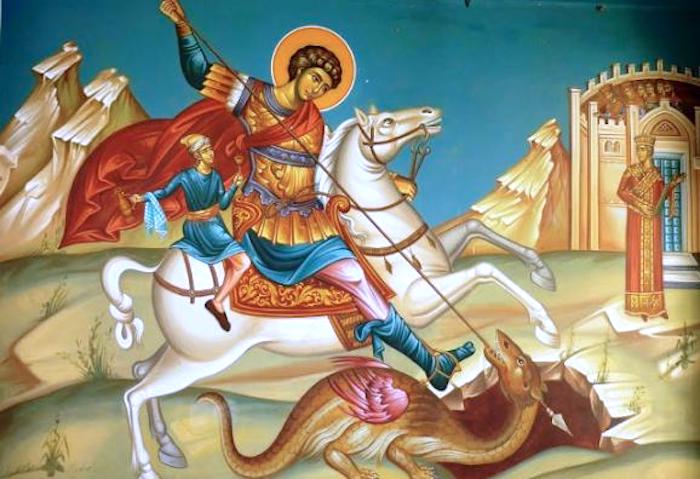 George, or Giorgos, or Georgios (Γιώργος ή Γεώργιος) is the most popular Greek male name, and the Greek Orthodox Church celebrates the feast of Saint George every April 23rd. Saint George is also the patron saint of the Greek Army.
There are some facts and legends about the name that not everyone who goes by that name knows. Let’s take a look at some of them:
The feast of St. George is normally set on April 23, the date of his passing. However, when this date falls within Lent, the feast is transferred to the second day of Easter.
The traditional picture of Saint George on his horse slaying the dragon has a striking resemblance to the mythical story of Bellerophon, son of Poseidon and the queen of Corinth, who killed Chimera, the mutated monster which had the head of a lion and breathed flames. Young Bellerophon managed to kill the beast with his spear.
The roots of the name are clearly and obviously Greek. It is from Γη and Έργο, meaning earth and work. So essentially Γεώργιος is a man who works the earth, or farmer. According to English Wikipedia, the name comes from ancient times when Greeks worshipped the twelve gods of Olympus. The word appeared in the plays of Aristophanes as well. It was also attributed to Zeus (“Zeus Georgos”), since one of the god’s duties was the protection of the crops.
The historical figure of Saint George was born in Palestine in 280 AD, the son of a Greek nobleman from Cappadocia. He became a martyr in 303 and that earned him renown throughout the Eastern Roman Empire.
George had joined the Roman army at a young age, where he distinguished himself for his boldness, but when he confessed his Christian faith, Emperor Diocletian became enraged and submitted the young soldier to a series of horrific tortures, stabbing and having his flesh torn with a special wheel with attached knives.
He was then thrown in a lime pit wearing burning metal shoes, and ultimately was beheaded, on April 23, 303. Later, legends were created around the name of the fearless martyr, with the most dominant one being the victory against the dragon that guarded a fountain in Libya.
In Greece, there is only one proverb with the name Giorgos. “Opou Giorgos kai malama,” Greeks say, meaning that wherever there is a George, he can only do good things.
There are millions of Greeks around the globe who answer to the first name of Giorgos.  Giorgos is followed in popularity by the names Dimitris, Kostas, Giannis and Nikos.
In the US, George is the 166nd most popular name, but it was among the five most popular one century ago, most likely because of the first president, George Washington. In Britain, the name became even more popular from the 18th century onwards, when George  of Hanover was crowned King. Note, however, that the English name “George” is given (less often) to women as well.
Let’s see how Giorgos is spelled in other languages: English: George; Arabic: Girgis; Basque: Gorka; Bulgarian: Georgi; French: Georges; German: Georg, Jörg, Jürgen, Jörgen; Georgian: გიორგი (Giorgi); Danish: Jørgen; Estonian: Spanish and Portuguese: Jorge; Italian: Giorgio; Catalan: Jordi; Lithuanian: Jurgis; Norwegian: Jørgen, Georg; Dutch: Joris, Sjors; Hungarian: György; Polish: Jerzy; Portuguese: Jorge, (Yury), Yegor; Slovak: Juraj; Swedish: Göran, Jörgen, Örjan, Georg; Czech: Jiří; Finnish: Jyrki, Yrjö.
Finally, let’s take a look at numerology and the name George. George is 1, which means he has the personality of a leader, he is imposing, takes initiatives, and is determined, but at the same time he is selfish.