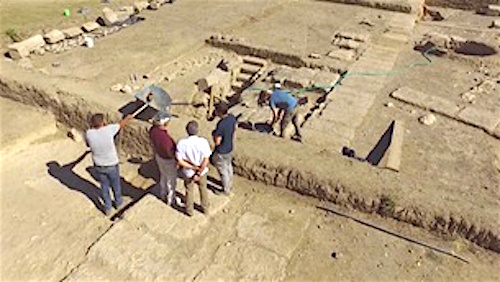 Swiss archaeologists have discovered an ancient temple of Artemis at the foot of Paleoekklisies hill, near the fishing town of Amarynthos, on the Greek island of Euboea.
According to Swissinfo.ch website, researchers have been looking for the sanctuary for more than a century.  The site of the temple is about 10km from the place where it was previously thought to be.
For the past 10 years, the search for the sanctuary has been led by Karl Reber, a professor at the Universty of Lausanne, and director of the Swiss School of Archaeology in Athens. Archaeologists discovered parts of a massive wall dating back to the classical era, which they believe belongs to the stoa or portico built near the temple.  Exploratory trenches were opened in Amarynthos in 2012, and the Swiss team unearthed a larger part of the building.
Artifacts that were found with inscriptions indicate that this is the site of Artemis Amarynthia; which was the end point of the annual procession of people from the once prosperous trading city of Eretrea; 10km away.  The ancient civilization held a festival in honor of Artemis; who was the goddess of hunting in Greek mythology.  She was worshiped as the patron goddess of Amarynthos; which takes its name from an Eretrean man who was besotted with Artemis.