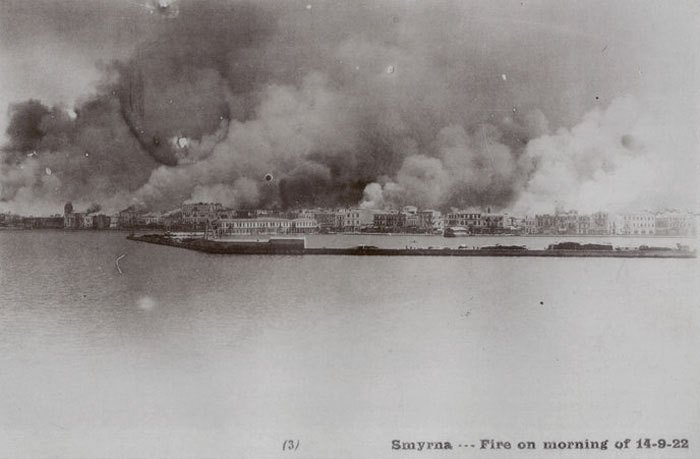 The fire of Smyrna and the killing of dozens of thousands of Greeks and Armenians by the Turkish army and renegades still remains one of the darkest moments of Greek history. Nevertheless, some contemporary Greek historians try to downplay the literal genocide that took place in 1922 in the name of good neighborly relations with Turkey.
Smyrna was the wealthiest of Ottoman cities, located on Turkey’s Aegean coast, it was a cosmopolitan city, known as the ‘Pearl of the Orient’.
Smyna had some of the most luxurious department stores, cinemas, opera houses in the world. Greeks (320,000) predominated the city’s population, that also was the home of 140,000 Turks, 10,000 Armenians and large numbers of Jewish, European and American people, all living in peace, as the city was a place of religious tolerance.
The Smyrna genocide was the result of a disastrous decision on Greece’s part to start a military campaign – encouraged and approved by Western powers – in Asia Minor in May 1919. Twelve Greek divisions started the campaign moving deep into Ottoman territory in Asia Minor.
In 1920, when the Treaty of Sèvres was signed in August to delineate Turkey’s borders, the Greek army had already taken Western Thrace.
However, Turkish leader Kemal Ataturk blatantly ignored the treaty.  At the same time, Athens called back a big part of the armed forces that were already in Asia Minor. In November 1920, Greece decided on a second wave of attack against the Turkish forces, trying to hit Ataturk hard inside Turkey.
By March 1921, the Greek army was advancing. The Turkish forces under Ataturk were gaining power and ethnic support. In July, Athens made another bad decision: to advance further into Asia Minor. The Hellenic Army was gaining territories, but at the same time it was disconnecting from supply points, therefore running out of supplies and ammunition.
By July 1922, Greek forces were dwindling down, not only in men but also in morale, with the government forced to call back another 8,000 soldiers. The Turkish forces under Ataturk were now on the offensive. A month later, it was the beginning of the end of Smyrna as the world knew it.
Chronologically, the events that took place and led to the dreadful 1922 catastrophe were:
August 26,  1922
The Turkish army, well-trained and supplied by France and Italy, finally launched a counter-attack and the major Greek defense positions were overrun.

August 30, 1922
Approximately 200,000 strong, the Greek army was routed at the Battle of Dumlupinar, with half of its soldiers captured or slain and equipment lost.
September 1, 1922
Kemal Ataturk issued his famous order: “Armies, your first goal is the Mediterranean, Forward!”
September 6, 1922
There were 21 war ships in the harbor, with 11 British, 5 French, 1 Italian, 2 US and more to come. Some 50,000 Greek troops and thousands of refugees poured into Smyrna and congregated on the quay side. The interior was in complete turmoil. Greek ships in the bay were taking away the soldiers as quickly as they could.
September 7, 1922
The allies had strict orders not to intervene in Turkish internal affairs. Their responsibilities lay with their national citizens. There were some 150,000 homeless refugees in Smyrna.
September 9, 1922
After the resignation of the Greek government in Athens, Turkish cavalry entered into Smyrna. By dusk, the Turkish army had approached the city from all sides and violence broke out. There was looting towards rich and poor alike. A large number of Greek soldiers had not managed to embark and settled old scores in a killing spree.
September 10, 1922
There was large-scale looting, raping, mutilating and killing of Armenians and Greeks. The Armenian quarter was systematically plundered. Kemal’s cortege entered Smyrna through the Turkish quarter where the cavalry awaited him. A battle raged with a battalion of 6,000 Greek soldiers heading to the coast. That last vestige of the Greek army surrendered and taken prisoners. Metropolitan Chryssostomos was murdered by a mob. There was no authority over men brutalized by years of war. Atrocities were committed in full view of the war ships. The streets and harbor were filled with bloated corpses.
September 11, 1922
The situation was deteriorating as more and more refugees made their way to Smyrna.
September 12, 1922
More homeless, terror-stricken, refugees continued to arrive and camp out in the streets. They were immediate victims of lawless elements of the Turkish army. At that time, some 7,000 British troops were stationed in Constantinople. Kemal stated: “We must have our capital and if Western Powers will not hand it over, I shall be obliged to march on Constantinople.” Smyrna was plunged into anarchy – desultory shooting, looting and rape all around. The allied ships remained under orders not to take any Greeks or Armenians. However, it is likely that the Turks would not have permitted them to leave.
September 13, 1922
The allies began evacuating their nationals. The city’s population swelled to over 700,000 people. Yet, Smyrna’s non-Muslims were confident that the warships of the Allied fleet would protect them. They hoped Kemal would view this still prosperous city as an asset to the new republic. They were, however, unprepared for the horror unleashed upon them. Turkish troops set the Armenian quarter alight. The quay side became crowded with half a million refugees with the fires raging behind them. The city burned for four days.
People were in danger of being burned alive as the fire had reached the waterfront. The ships moved 250 yards further out to avoid the intense heat. The ships’ bands struck-up tunes to drown-out the screams and shrill cries of a frantic mob on the quay side. A British admiral had a dramatic change of heart and ordered all available boats to be lowered and dispatched to the quay side. Total chaos followed. Yet, one by one, the ships were overflowing with Greeks and Armenians. The harbor and streets were filled with bloated corpses: people, dogs, horses. The stench of burning flesh prevailed.
September 14, 1922
The rescue mission continued and room was found for 20,000 people. The war ships sailed to Athens which was already crowded with refugees and not equipped to deal with an influx of hundreds of thousands of others.
September 15-18, 1922
Refugees continued to arrive in Smyrna. There was hunger, thirst and a sanitary crisis. Kemal decreed that any refugee in Smyrna on October 1 would be deported to central Anatolia. But deportations began immediately. All Christians of military age were deemed an enemy. The forced marches were similar to those of the deportations of 1915. Ultimately, 100,000 people were killed and 160,000 deported to the interior.