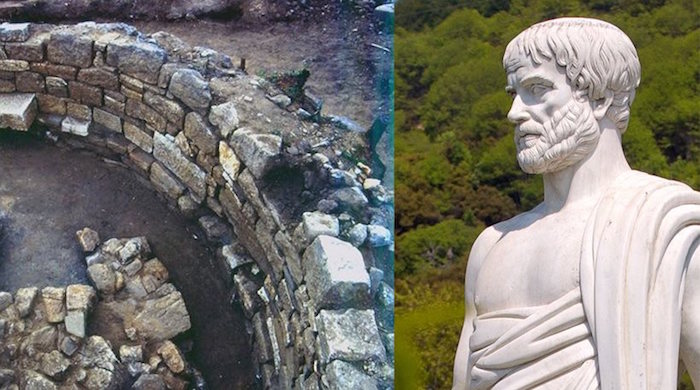 Greek archaeologists at Ancient Stagira, Central Macedonia, say they have found Aristotle’s tomb. Addressing the Aristotle 2400 Years World Congress, they point to the 2,400-year-old tomb as the most important finding from the 20-year excavation.
The discovery of the tomb of Aristotle was announced by archaeologist Kostas Sismanidis, according to whom the findings from the 1996 excavation lead to the conclusion that the tomb belongs to Aristotle.
Aristotle was born in Stagira in 384 BC and died in Chalcis, Evia, at 322 BC. The great philosopher was originally believed to have been buried at Chalcis, however, archaeologists are now certain that the tomb they have found belongs to Aristotle. Two literary sources indicate that the people of Stagira may have transferred his ashes to his birthplace.


The mounded domed tomb has a marble floor dated to the Hellenistic period. It is located in the center of Stagira, near the Agora, with 360-degree views. The public character of the tomb is evident by its location alone, however archaeologists also point to a hurried construction that was later topped with quality materials. There is an altar outside the tomb and a square-shaped floor.
The top of the dome is at 10 meters and there is a square floor surrounding a Byzantine tower. A semi-circle wall stands at two-meters in height. A pathway leads to the tomb’s entrance for those that wished to pay their respects. Other findings included ceramics from the royal pottery workshops and fifty coins dated to the time of Alexander the Great.
The tomb structure was destroyed by the Byzantines, who built a square tower on top of it.

Related: How Archaeologists Found the Tomb of Greek Philosopher Aristotle