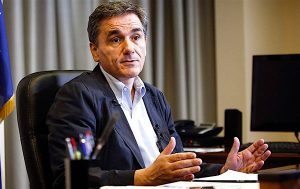 Greek Finance Minister Euclid Tsakalotos reportedly sent a letter to his Eurozone counterparts, ahead of a Eurogroup meeting on Monday, warning that it is not possible for contingency measures worth 3.6 billion euros to be imposed.
The letter, exposed by German MNI news agency, states that the Greek government has upheld its part of a bargain reached in the summer of 2015 through the introduction of structural reforms and bank recapitalization while tackling the refugee crisis.
Addressing the dissent among Greece’s lenders from the European Commission, European Central Bank, International Monetary Fund and European Stability Mechanism, Tsakalotos argues that the methodology used by the IMF has resulted in predictions that have fallen out in the past. He elaborates the difficulties of imposing additional fiscal measures required to achieve a 3.5 percent GDP primary surplus in 2018.
The dramatically-worded letter implies that the left-led SYRIZA government has reached its limits. Tsakalotos states that the new social security bill puts an end to separate insurance funds and converges all funds together with cuts to future pensions. “Can you imagine submitting a 9-billion-euro package of measures instead of a 5.4-billion-euro package that is expected?” asks Tsakalotos in the letter. “Greece needs a clear statement for measures to be applied immediately and measures to be taken in the future.”
On his part, Tsakalotos neither confirms nor denies the existence of the document.